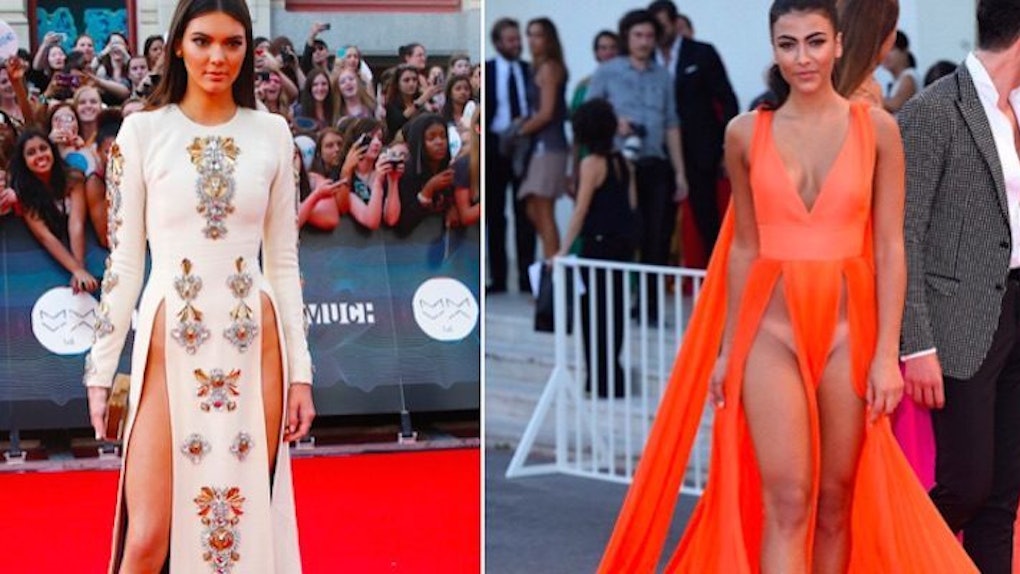 If there's one thing we can learn from the latest red carpet trends, it's that the barely-butt-covering bandage dress trend of the 2000s has finally gone to the style grave.

However, there's one variation of this fashion trend that needs to be addressed.

It's the extreme, double slit dress, or as some people like to call it, the "visible vagina dress."

Like most things in life, there's a fine line between teasing those around you with a peek of skin and wearing a split dress that leaves all too little to the imagination.

It's not hard to see that the visible vagina dress is definitely the latter of the two.

Yep, in some cases these next-level slits extend all the way up to the waistline, relying on a small strip of wispy fabric to keep the crotch area covered.

Since wearing underwear with one of these ensembles is totally out of the question, most of these ladies look like they're a slight breeze away from a wardrobe malfunction that would put Janet Jackson's Super Bowl nip slip to shame.

Kendall Jenner was the first to turn heads with this daring look back in June 2014.

You know, when she somehow managed to pull off the whole double slit style with an embellished gown that was all business in the back and barely anything in the front.

Since then, we've seen lots of other celebs taking the plunge and trying out this risky trend.

Some stars, like Gemma Arterton, have actually found a way to tone down the sex appeal of this trend by pairing these promiscuous cutouts with sheer panels.

Celebs like Ciara have added a little crotch security to their slits by layering them with a sexy, lace leotard.

On the other end of the style spectrum, you'll find the ladies who take the double slit trend to a new level of extreme.

TBH, we're not quite sure how we feel about seeing this much crotch cleavage in one sitting.

I mean, seriously, I still can't figure out how you can wear so much fabric, yet still manage to look naked.

When it comes to pulling off the double slit dress, there's a fine line between tasteful and way too much.

Our vaginas are called private parts for a reason, so let's stop parading around with our vajayjays out and about.

Because let's be real: the visible vagina dress is kind of like the word "fetch." It's just not going to happen.

Seriously, if we keep this up, it's only a matter of time before dresses with actual vaginas on them become a thing.

Citations: Would YOU wear a crotch-baring dress? Stylist reveals the underwear tricks for anyone brave enough to try fashion's most daring new trend (Daily Mail)