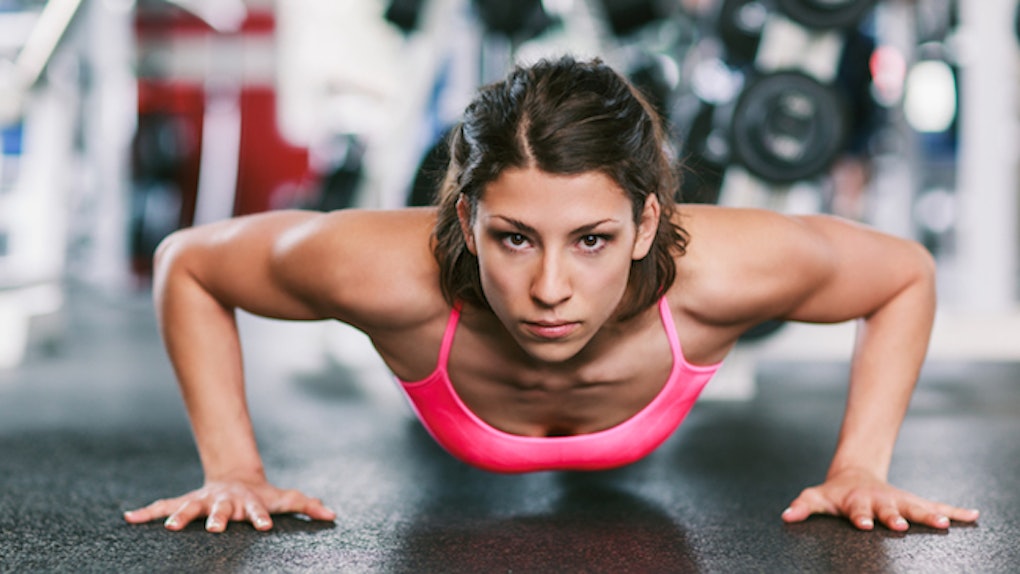 Why Girl Push-Ups Need To Go

As a yoga teacher, I'm pretty used to hearing that my choice of fitness is not a "proper" workout, and would be best saved for a rest day, and not much else.

Considering I can hold a plank for five minutes and lift my own body's entire weight with ease, you can see just how offensive and plain rude this is.

It's also easy to see how sexist phrases like "girl push-ups" somehow still exist in our culture, and no one seems to bat an eye at it.

For real, the term "girl push-ups" needs to die a painful death already.

A "Girl Push-Up" Is Simply A Regular Push-Up, But Modified

You make the exercise easier by coming down to your knees and using them for extra support, until you build up enough strength to transition to a "regular" push-up.

In this video, two health coaches demonstrate the correct way to do modified push-ups.

It would honestly be fine if the phrase "for women" wasn't plastered across the screen in glaring, neon typeface.

Sorry, Donna and Torra, but I know plenty of men who couldn't do a single push-up if their lives depended on it. Should they also start with these "feminine" push-ups, too?

These Linguistic Details Matter Way More Than You Think

According to SFGate, a 1996 study published in the Illinois Association for Health, Physical Education, Recreation and Dance journal found that women were more likely than men to underestimate how much they could bench-press.

Clearly, women have been conditioned for decades to believe they can't possibly lift as much as a man, or even perform the same types of push-ups as them.

But don't get me wrong; I'm not blaming men alone for these misconceptions.

Rather, it's society as a whole that promotes a certain image of women -- one that's thin, lean, and toned, rather than powerful, muscular, or strong.

The standard tells women to work out and be fit. But no no, stop right there. Don't become so fit that you can actually kick a man's ass.

Instead, you're told to stay over there, and work on your "girl push-ups."

In case you need a reminder of the strong, highly capable, incredibly badass woman you can be, here's a video from one of my favorite yogis on Instagram, Hannah GypsyOn:

There's nothing at all about Hannah that comes across as "girly."

Unless, of course, by "girly" you mean impressive body control and spectacular strength. Then, yes, she's super girly.

Instead of slapping unnecessary labels that divide men and women, society should celebrate the strength and power that comes with being a woman, and allow it to be equivalent to the automatic credit that men receive for their strength.

The next time you want to call it a "girl push-up," do everyone a favor and please just call it a "modified push-up."

It may seem trivial, but changing the world starts with baby steps just like this.