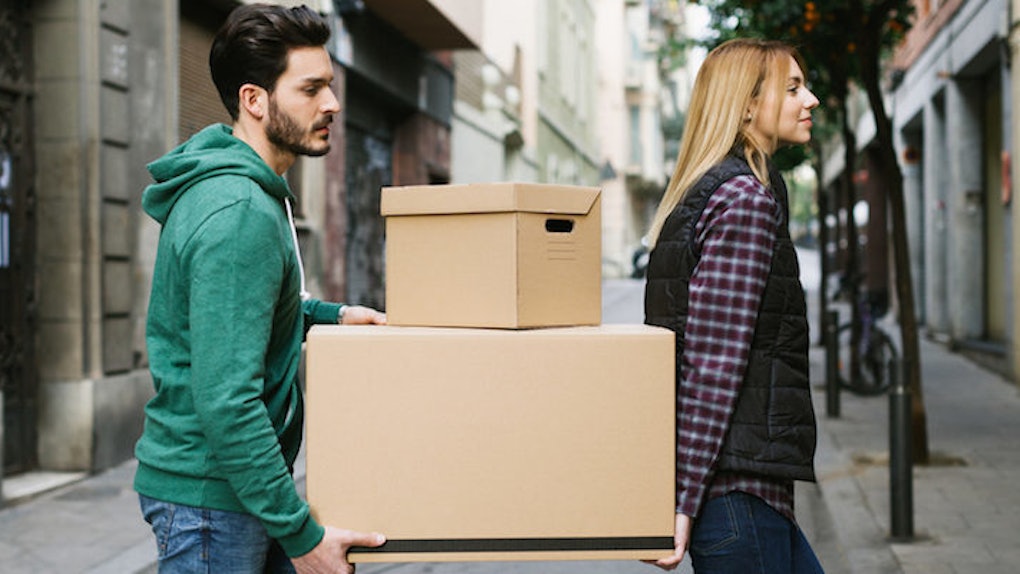 I didn't know prenups existed until I listened to Kanye West's "Gold Digger." Back then, it wasn't something my 12-year-old self needed to be concerned about.

At age 24, however, I'm beginning to expend precious brain energy thinking about it. Prenups aren't just for couples who are about to tie the knot. Many people moving in together for the first time are signing the dotted line on a "no-nup."

A no-nup is a fancy roommate contract that protects your hard-earned cash and living situation in case of a breakup. If you and your boo haven't thought about it, you probably should. According to a 2013 survey, almost half of women ages 25-44 had "first unions" where they just lived with their partner instead of going all the way to the altar.

The basic document includes how you will divide or manage expenses like rent and bills. It also covers who owns what in the house (like that expensive leather couch) and spells out terms for any joint bank accounts.

This document isn't like one of those roommate agreements you sign freshman year of college that says who's in charge of taking out the trash and whether or not overnight guests are acceptable. To create a no-nup that would be upheld by court, you and your partner should get a sense of your terms and go to a lawyer to get it formally drafted.

I know it sounds boring, but making a solid arrangement before settling with your honey can save your ass in the long run. Deciding to move in together isn't like picking which movie to watch on Netflix. Yeah, both of those decisions take a long time to make, but which one do you think affects your finances more?

Side note, if you are creating a no-nup with your partner, you might want to add something about who pays for the Netflix account.

There are two truths we need to face here: One, no matter how much of a romantic you are, your relationship could end. No amount of love will help you during a break up when you're figuring out who actually owns the couch. Also, even if you think you have nothing to protect, a no-nup can save you from getting screwed over if you split.

You might think a legit contract is too much for you right now. Sometimes I can't even be bothered to write out a whole grocery shopping list, let alone a legal document. Planning ahead is tedious and scary sometimes, but so is losing money over a break up.

As adults, we have bills to pay, groceries to buy and bathrooms to clean. Some of us have pets to take care of. What happens when a partner gets involved? Imagine having to decide who gets custody over your furry best friend during a messy breakup.

I hate to burst anyone's bubble, but ignoring responsibilities doesn't mean they don't exist. These are the kind of matters that you should have a plan for before they come up.

My friend and her boyfriend share a checking account and have credit cards specifically for groceries. What if they broke up? Would you want to talk to your ex again after seeing he bought some other chick cocktails with your shared Visa?

Maybe I'm just a huge dork, but I look forward to doing this with my boyfriend if we ever move in together. Creating a no-nup is kind of romantic, showing you care enough to lay it all out in writing, making your already legit relationship even more so.

If your relationship progresses and you decide to have kids or get married, these agreements can be updated with the help of your lawyers. Even if you don't want get to that stage, you can make changes together as you go along.

Worried about what your partner might say if you bring up a no-nup? Tell him or her the importance of this agreement, and how it's just another way to protect yourselves in case something happens. In our 20s, we're just getting our lives in place. In the midst of a breakup clusterf*ck, you'll be happy to have the clarity provided by an arrangement written before everything went to sh*t.

I trust my boyfriend with my life, but I don't fully trust anyone but me with my money.