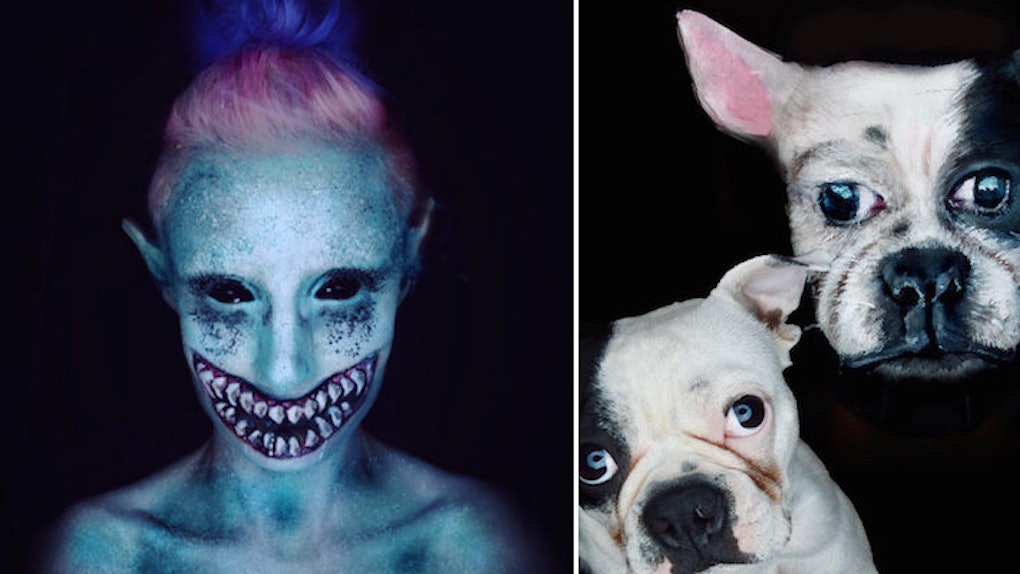 This Makeup Artist's Insanely Detailed Transformations Will Blow Your Mind

Emily Anderson is about to blow your mind.

The professional makeup artist, who works in Los Angeles, makes her money by transforming actors into monsters and glamming up rockstars on video sets.

But occasionally, Anderson, 25, takes her creative juices to her nearly 20,000 Instagram followers.

Via social media, you can watch the artist turn her neck into a gaping, fanged monster mouth or paint the entirety of "Howl's Moving Castle" on her forehead.

With Mehron Paradise paint, good lighting and a camera, it seems like nothing is too complex for the makeup artist.

I'm particularly obsessed with her extra-realistic images, which include painting her face to look exactly like a velociraptor and mimicking her dog, Bruiser.

Way back in 2015, Anderson received a wave of press from publications like Bustle and MTV. They were awestruck by the monster masks she hand-painted across her own face. Since then, Anderson's branched out quite a bit.

It's not enough to create spookedies that haunt her fans' dreams. Now, she's going fantastical.

Anderson has painted her face to look exactly like Leonardo DiCaprio, Ursula The Sea Witch and more.

In real life, this makeup artist looks like everyone else.

Incredible transformation, right? Sometimes, she even posts behind-the-scenes videos of how her art gets made. This look, in particular, was her favorite.

"It's the first makeup that I did that really pushed me to look at perspective differently," she explained in an email.

Not wild enough for you?

Her professional portfolio contains a section labelled "Wounds, Cuts and Bruises," in case you thought your day job was rough.

As for enjoying her own job? Anderson says it's a dream (or a nightmare) come true.

"I feel like you can't wake up and have a bad day going to work when you know that your job is something that you love to do," she says.

Agreed, and Anderson seems to have found her niche.

If this is what five years of doing professional makeup looks like, imagine where she'll be in 10.