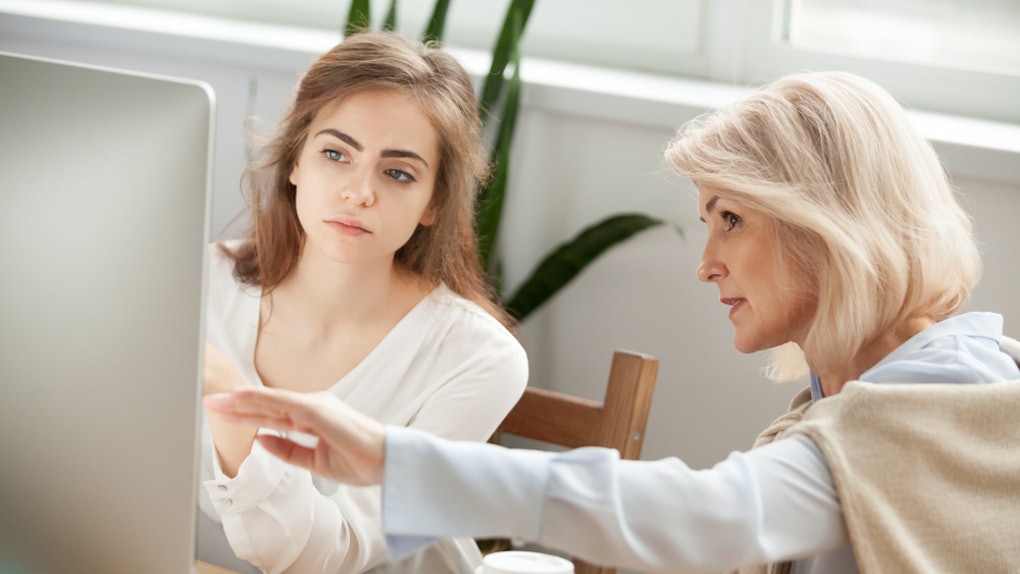 Walking In Her Shoes: Why Every Woman Needs A Strong, Female Mentor

Hannah Horvath has some problems.

Luckily, she also has her "Girls" -- her BFFs. But while girlfriends can be great for talking to, they can also often give some terrible advice.

You know the type: the friend who allows you to justify buying the bag you don’t need, or the one who doesn’t speak up when she hates your new haircut. They’re either just as confused as we are, or they’re dishonest to spare us any hurt, and we love them for that.

Sometimes, though, this behavior doesn’t translate to the best career or life advice.

Despite the fact that Lena Dunham’s show is called “Girls,” there’s an awful lot of men in it, who are in positions of power or authority over our leading lady’s life (boyfriend Adam, therapist Dr. Rice, eccentric e-book editor David, etc.).

While these characters are all certainly important presences in Hannah’s ongoing issues, she’d really benefit from a strong, well-seasoned female figure.

So many successful women have already realized the importance of that “Females Only” bond: Claire Danes has Meryl; Huma has Hillary. And, as Forbes would have you know, it’s okay to have more than one mentor, and to maybe even categorize them.

Regardless of how many women you emulate and seek advice from, having these female mentors is especially important to us young adults as we navigate the unique challenges of becoming successful, thriving women in both our professional and personal lives.

Female mentors offer an important perspective that we simply can’t get from male colleagues or superiors.

Female mentors have the lives we want for ourselves; they’re the women whose careers we’re in awe of, whose lifestyles and values similarly mirror our own.

Quite simply, it’s good to have seen someone do it first, and there’s no shame in connecting with this individual and trying to mold yourself in her image -- while still allowing your romper-wearing self to shine through, HH.

These relationships are also empowering. According to University of Texas, Austin Professor Lucia Gilbert, female mentoring can help reverse the socialization trends that teach women to please and defer to men in various (and often professional) settings.

Digital Creative Director at Vogue Sally Singer, who lists Anna Wintour (ever heard of her?) as one of her most influential female mentors, breaks down how good female role models operate:

The trick to being a good mentor is not just answering someone’s immediate question, and not reassuring people that it’s fine; it’s about thinking about who is the person before you and what do they need that they might not even know they needed? To be a good mentor you have to really understand the person who’s looking to you as an extension of who they want to be, and how can you help them.

I think there’s plenty of hope for Hannah to get some positively influential women in her life. I mean, you obviously also saw the Season 3 trailer featuring the world’s best boss, Jenna Lyons.

Hannah could certainly learn a thing or two about success and self-worth from these already-established women, and further her career in the process.

If, in the end, it doesn’t work out? It’s cool. Move on. After all, “It’s really liberating to say no to sh*t you hate.”