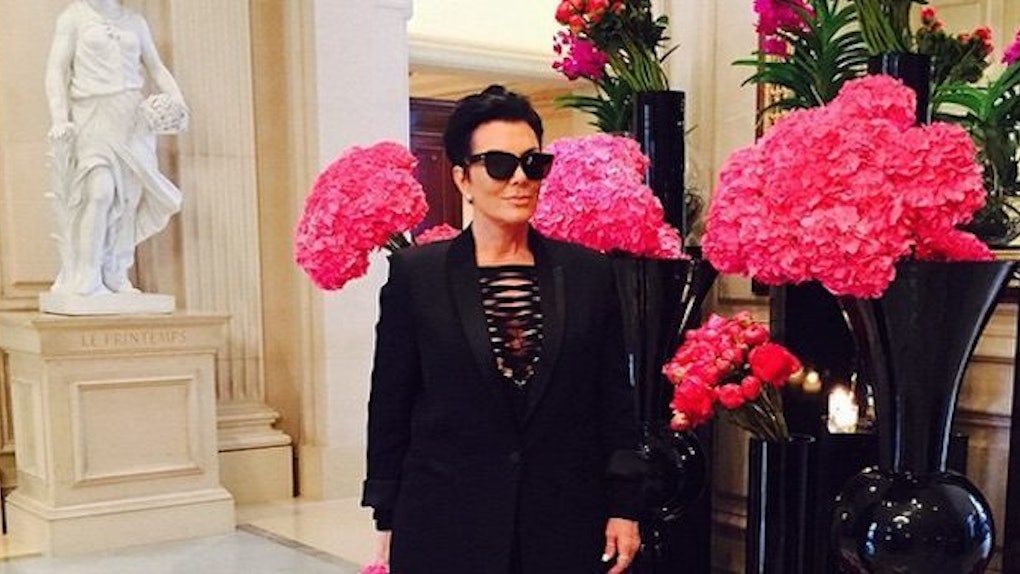 #Blessed Is The New Brag: Stop Pretending To Be Humble On Instagram

Not just any shade of the fiery color, either. It's Estée Lauder red, the color of daughter Kendall Jenner’s lipstick in a nationwide print campaign; Lanvin red, the shade of Khloe Kardashian’s Met Gala dress.

Let’s not forget to include the red of Melanie Griffith's dress as she and Kris pose for selfies before meeting the Dalai Lama. Or, the shade of granddaughter North’s Minnie Mouse bow as they take on Disneyland.

And through it all, a tiny line of text in almost every caption informs viewers that Kris is #blessed.

The Kardashian matriarch uses the hashtag so frequently she may well qualify for some Internet-bestowed pastorship.

Although Kris is an easy example to make the butt of a joke, she’s far from the only one shoving her worldly goods down the throats of others through social media.

A Pew Research Center survey of Americans, completed between 2007 and 2014, found that the number of people who identify with a religion has dropped continuously. Notably, the data revealed that those taking a step away from organized worship are younger than they’ve previously been, with a median age of 36.

So although religion continues to become less popular, the use of #blessed has spiked in the years since Instagram was introduced.

Maybe the reason is that being “blessed” in the Millennial sense never had anything to do with a deity. Just because you had the opportunity to do vinyasa flow on a rooftop of New York City (#blessed #yogalife), doesn't mean you're above other people. This privilege shouldn't be seen as an advantage over friends, nor should #Blessed be a chance to say, "Look at me now."

It's not a larger power, it's your ego making you feel #blessed.

Since the beginning of organized religion, humanity has understood a blessing to be a gift bestowed by a force much larger than ourselves.

But, in the millennial age, our egos have grown so inflated that we apply the term “blessing” to the most trivial events of our day: you’re #blessed to buy the last chocolate chip muffin at the coffee shop, or #blessed to be sweating at spin class. That’s not a blessing, per se, it’s life.

Comedian Amy Schumer recently poked fun at the same idea of ego versus a larger power in a sketch guest-starring scientist Bill Nye. It’s clear we’ve totally lost our sense of relativism when we believe a supernatural power has nothing better to do than make our phone batteries die before we drunk dial our exes.

One selfish hashtag gives way to others.

If Instagram is the app most likely to give us FOMO, then #blessed is like a social media slap in the face.

We know we’re missing out; you don’t have to explicitly tell us in a falsified humbling way. And as if one self-indulgent hashtag isn’t enough, it’s spawned a thousand spin-offs in the manner of hellish spider babies.

Kris, for example, no longer solely relies upon #blessed to explain her enthusiasm about private jets and Paris Fashion Week.

Now, she’s also a #proudmama when her children gain media attention and every new trip to Europe is #kindofamazing. And, of course, Kris is always #grateful.

Nothing says gratitude and humility like blasting an elitist, one-percenter image out to 7.4 million followers, that’s for certain.

Photographs paint a different picture than the reality.

Being successful on Instagram is usually a result of clever personal branding.

No one wants to see the pile of dirty socks you just laundered, but they're likely to show enthusiasm for the beach photos from last weekend.

We're all picking and choosing the best moments from our lives, and it's important to remember that the most successful posts aren't usually representative of our quotidian experience.

Maybe each photo is, in and of itself, a #blessed moment. If it's memorable or beautiful enough to upload for hundreds of followers, it's clearly an event we held dear.

Instead of rubbing it in, just appreciate the good moments without sucking the word "blessed" dry of meaning.

Social media isn't a game exclusively for multimillionaires or broke college kids, but for people of all backgrounds to share and form communities.

Kris Jenner is the most gratuitous #blessed offender, but glamour is also an important part of her brand.

Bottom line: Share the good things that happen to you, just don't act like a dick about it.

Before you hit that right-facing arrow to upload an Instagram, stop and think: Is this just for the benefit of my ego, or to actually share a good memory?