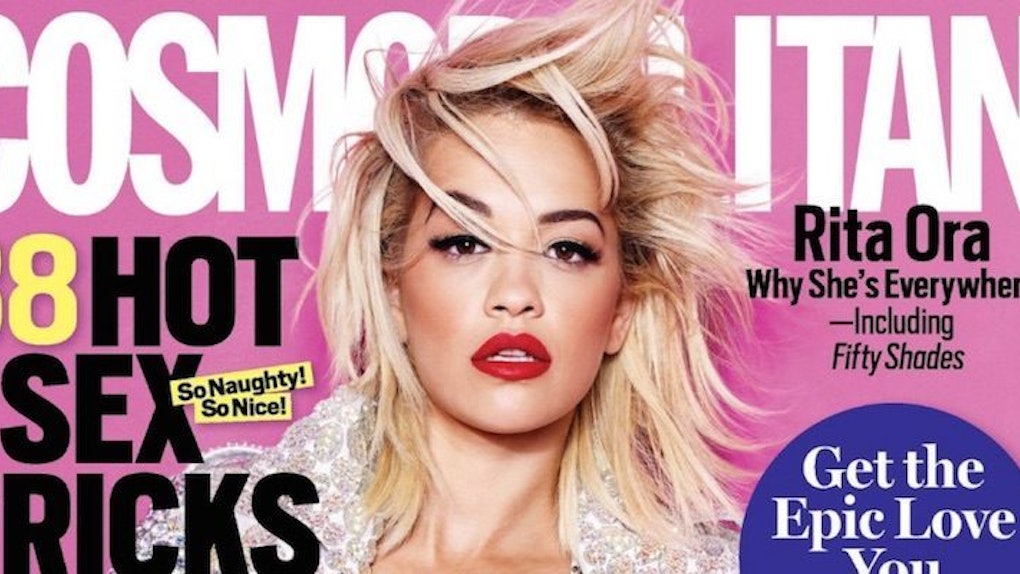 Sex And Censorship: Why Covering Up Cosmo Covers Is A Really Bad Idea

As a war over sexual content flares up, the pink-saturated pages of Cosmopolitan magazine have become the battlefield.

The companies claimed the magazine is too sexy for the average grocery checkout line, negatively influencing minors who walk past.

The successful campaign is the pet project of the National Center on Sexual Exploitation, or NCSE, which has deemed Cosmo pornographic.

The magazine's editorial staff, for its part, released a rather generic statement maintaining its pride in women-centric journalism:

Cosmopolitan is the most successful global media brand for young women, publishing 60 editions in 79 countries and 32 languages. Its award-winning content is produced for adults by leading female journalists. We are proud of all that the brand has achieved for women around the world in the areas of health, relationships, career, politics, equality and social issues.

While the NCSE and conservatives celebrate a victory against what they deem as sexy content, it seems as if no one is stopping to address the serious repercussions of censorship at an early age.

The newest generation of young people is digitally native, meaning they’ve been able to handle an iPhone since infancy. They can manipulate apps, snap photos and call on Siri by toddlerhood.

By middle school years, children have access to Internet content we could never have dreamed of during our childhoods.

No matter how carefully we apply web surfing filters, they’ll be exposed to more sexual material than their parents can control. Inevitably, that content will raise questions.

A survey from 2012 revealed only 87 percent of teenagers believe they'd be able to resist sex longer if they could talk earnestly with parents and caregivers about the subject.

Similarly,  38 percent claimed parents were the biggest factor in their sexual behavior, placing a premium on their influence.

Making sex a taboo issue to be covered up and hidden away reinforces the outdated cultural idea that it’s dirty act. Instead of hiding procreation, let's talk about it.

On its website, the NCSE site statistics from a 2015 nationwide survey that shows 67 percent of male and female interviewees across the country feel the magazine, its models and headlines are “inappropriate for viewers of all ages.”

The problem is that Cosmo may talk about sex, but it’s not a pornographic magazine. There’s fitness, first-person accounts of relationships and date night advice within its pages.

Censoring the cover a magazine that shows no nudity is a dangerous first step towards picking and choosing what journalism is passable according to the moral standards of private organizations.

Interestingly, much of the magazine’s sex-related writing is done with tongue in cheek. Very few readers, one imagines, actually cover their breasts in whipped cream and stick an ice cube up their nether regions to get their man going.

Not only are they available for purchase at any age, but they’re also displayed without a warning at book stores across the world.

We're perfectly fine with 13-year-old girls cracking open a book that's arguably about a submissive female and abusive relationship. But Cosmo, which endlessly promotes a "woman on top" way of living, has been publicly painted with a Scarlet Letter of sorts.

Sex isn't something that should be hidden from sight, especially when it's being promoted in a way that results in respectful treatment of women.

Companies who fall prey to the agenda of right-bearing groups like the NCSE should be ashamed of giving into the moralizing pressure.