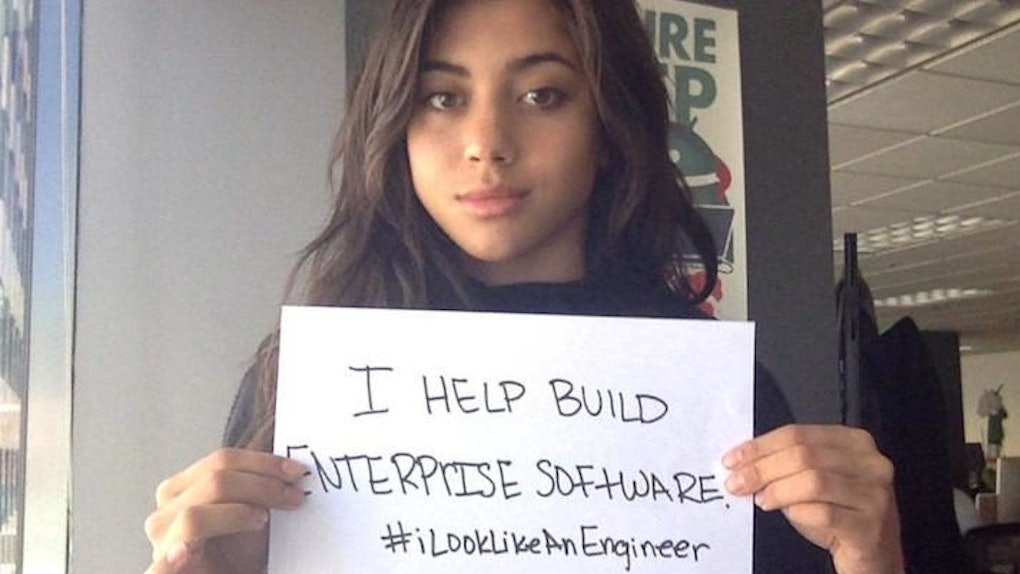 Amazing Campaign Aims To Blast Stereotypes About Women In Engineering

Female engineers united on Twitter under #ILookLikeAnEngineer after an advertisement showcasing a female engineer prompted a series of sexist responses.

In a recent essay for Medium, Isis Wenger, a platform engineer for OneLogin, exposed some of the awful and sexist realities she faced while trying to make it as a female in the tech industry.

In the essay, she said she's had grown men throw dollar bills at her during work hours. She also claimed,

I've had an engineer on salary at a bootcamp message me to explicitly 'be friends with benefits' while I was in the interview process at the school he worked for.

In the middle of the article, Isis brought up how she was subject to an incredible amount of backlash after a print ad she was featured in ran for OneLogin.

One person posted the picture and commented,

This is some weird haphazard branding. I think they want to appeal to women, but are probably just appealing to dudes. Perhaps that's the intention all along. But I'm curious people with brains find this quote remotely plausible and if women in particular but this image of what a female engineer looks like. Idk. Weird.

Isis posted a picture of herself in response to people saying she didn't look like a tech engineer.

The Twitter post united tech workers everywhere who are challenging the notion there is a standard look for someone working in tech.

#ILookLikeAnEngineer, despite often being mistaken for a marketer, designer, recruiter, or my fav—a girlfriend. pic.twitter.com/fNzhzSQCOr — glitter witch irl (@TessaHarmon) August 4, 2015

#ILookLikeAnEngineer flooded Twitter with pictures of all kinds of people, and Wenger's original post was favorited almost 500 times.

Wenger told TechCrunch the campaign is intentionally non-gender specific, and she hopes people of all sorts will list their accomplishments in the field.

Dev for the past 15 years (self taught) & I'm hard of hearing with 2 hearing aids. #ILookLikeAnEngineer pic.twitter.com/umty4wSqL7 — Todd Rafferty (@webRat) August 4, 2015

I'm not in your SoMa office to unclog yr toilet, deliver tacos, or take out the trash & #ILookLikeAnEngineer pic.twitter.com/fxQjkbKAH8 — Isaac Elias (@BrainScraps) August 4, 2015

One mother even posted on behalf of her daughter who is too young to tweet.

I love to code my own Minecraft mods. #ILookLikeAnEngineer and can't wait to be one someday. #proudmama pic.twitter.com/NihshBXXMJ — Jodi Jahic (@jodij) August 4, 2015

More of this, please!