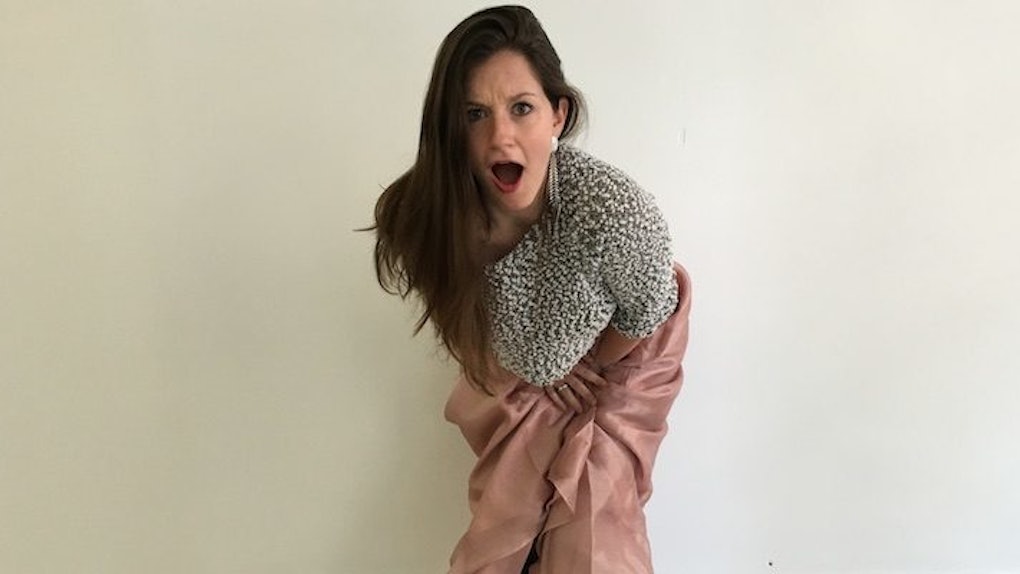 We always hear about guys getting rocked hardcore in the balls, but rarely do we see a damn thing about vagina injuries.

It wasn't until yesterday -- when I heard that some woman destroyed her c*nt while water skiing and that another one had sliced off her clit with a razor while shaving -- that I decided a dialogue about vagina trauma needed to happen.

In the wake of these horrid tales of yore, I had to think back on the history of my own ladybits.

Had I ever hurt my vag before? After about 42 seconds of deep contemplation over a cup of coffee, I realized: Oh, hell yes.

Even if you think you don't have a story like this, you do. Trust Auntie Gigi on this one. WE ALL HAVE ONE.

One time, my boyfriend and I had sex without any lube. Why? I don't know, OK? We were in a rush. Anyway, for whatever reason, my vagina started bleeding when we switched positions. At first, it seemed like not that big of a deal. But I quickly discovered we were wrong.

There was blood EVERYWHERE. It looked like a f*cking crime scene. My poor boyfriend was so shocked and horrified by the sight of blood that he almost passed out. He spent the rest of the night ghost-white and sipping water with a cold compress on his head, the poor angel.

Another time, I was having sex against this wall and somehow homeboy's wiener went sideways instead of up. I'm about 76 percent sure I heard the rip. This ended with embarrassment, a call to my doctor and two weeks of constant burning when I peed. Yikes.

See, we're all in this together!

But do not be fooled, my dear chickens. Not all vaginal injuries are sexual. Nay, most of them come from the simple mishaps of LIFE! Many people think a vagina cannot endure the same kinds of injuries that one might assume were strictly limited to a man's ballsack.

That is incorrect. Vaginas can, have and WILL endure pain.

Here are some real-ass women on all the times they sustained a vagina injury. Read, laugh, cry, chortle and feel some solidarity.

1. Let's start with a collective cringe, shall we?

2. Followed by an audible “OOooOOOooo.”

A few days after I got my vagina piercing, I was still under the impression I could do regular day-to-day things. You, know, like play around on my friend's at-home stripper pole. Even though the tiny ring that rested on my lady pearl was healing quickly, I wasn't aware at just how traumatized my kitty cat still was by her new jewelry. (And not in that "Oh my God, I'm cumming" way, either.) I grabbed onto the pole, hopped up to throw my legs around it and immediately the pole banged into my new accessory. The pain was so sharp, it quite literally sent chills through my body. Let's just say that I've snagged my piercing on threads from jeans, fingers (don't ask) and other things, but to this day, there has never been pain to my p*ssy quite like that.

3. Sometimes, vaginal injuries can traumatize you.

I was in college and drunk AF one night when I went home with this boy. He took off his pants and, holy sh*t, it was the biggest penis I ever saw in my entire life. Like legit the size of my arm. I couldn't stop staring. ANYWAY, we had sex, and while we were doing it, I felt like my ovaries were exploding. I was in so much pain that it wasn't enjoyable at all because it felt like I was being f*cked by T-Rex. I faked an orgasm so we could finish because I thought he'd killed me. BLOOD WAS EVERYWHERE. (TMI? IDK.)

I went home, and the next day called my pediatrician to ask her if I was dying, if I couldn't have kids, what was happening down there (THE PAIN WOULDN'T GO AWAY). I gave her the details of our late-night f*ck, and she was horrified. (This is the woman who held me as a baby and fed me applesauce after I got my shots.) Anyway, she told me that having pain the next day can be a somewhat normal experience. I was like, "No, bitch, I can't walk. You don't understand. I need help ASAP!' She told me to ice my vagina. So, for five straight days, I iced my vagina, and my life was never the same again.

You know how they say 'You never forget how to ride a bike'? Yeah, well, they're lying. I was on a second date with a guy I really liked. He invited me to Brooklyn, where he lived, to ride bikes around his neighborhood and on this pier overlooking the water. Romantic and awesome, right? I know. I was stoked. Unfortunately, however, I hadn't ridden a bike since I was, like, 13, and he came from a family of avid bike riders. So when I met him at his apartment and he retrieved the bikes from his storage space, I took one look at the bike with its massive wheels and a seat that was definitely way too high for me, and I knew I was going to embarrass myself. Lo and behold, when I climbed on top of the bike, I managed to balance myself on it for half of a millisecond before my efforts to do so crumbled and I crashed down onto the concrete, jamming the seat RIGHT into my pubic bone. I tried to minimize my reaction to a tiny whimper (when I really wanted to react by SCREAMING AT THE TOP OF MY LUNGS), but my poor date bugged out anyway and asked if I was OK, like the gentleman he was. Yet in an effort to be chill about the searing, pulsating pain that had, by now, made its way to my clitoris, I brushed it off with an 'I'm fine!' and continued to shakily ride the bike down the block. I'm happy to report that I eventually did remember how the ride the bike, but the pain in my vagina didn't really subside until hour two of the date. Oh, well.

5. Getting kicked in the vag at an early age will scar you for life.

In elementary school, recess was always my favorite time. It was a chance for me to express my freedom, and it was also a prime time for injuries. One day during recess, I was playing 'Ring Around The Rosie' with a friend, and things got a little cray. After endlessly turning in circles, she wouldn't let go of my hands. In an attempt to rebel, I tried yanking them away from her. In this time she sought other opportunities and decided to knee me in the vagina. I never quite understood what it felt like to be kicked in the balls, but it was in this moment that I had a sure idea. My lady bits were bruised. I was an injured soldier, and it wasn't until the next day that I regained feeling down there once again.

6. Well, there go those Olympic dreams!

When I was playing soccer in high school, this bitch did a high-kick, missed the ball and instead kicked me right up in the vajayjay. SHE HAD CLEATS ON. That was the end of my soccer career.

It didn't really involve my vagina, but my ex slipped out and wound up tearing my assh*le open. The end.

My friend slipped getting out of the shower of a sliding door. Had to go to the hospital because of the sharp slidey door thing. Owwwwww.

9. The hazardous business of a water park can end in disaster.

I went to a water park with my family, and my brother convinced me to go on this water slide that was basically Mount Everest. It was steep AF, but I figured, 'YOLO.' We got to the top, and I was literally so f*cking scared that I had to force myself over the edge, and I immediately regretted it. I slid down what seemed like a 10-minute black hole of water, trying to stay alive and not have a heart attack. (And also trying to figure out when this hellhole was ending so I could close my mouth and not eat chlorine by the time I made it to the bottom). Once I hit the bottom, I came out spread-eagled into a pool, enabling the water to shoot directly up my vag. This pain was something I had never experienced before. I was almost completely numb inside and outside my lady parts. It was a nightmare. I stuck to dry rides for the rest of the day.

When I was dating my ex -- the first person I had sex with -- I got three UTIs in as many months. The first time I got a UTI, I was home in Florida on winter break, and my boyfriend had flown down to visit me. After he left, my vagina started stinging like mad, and the only thing that helped was lying in hot water with my legs elevated. I agonized over telling my mother (because then she'd know I HAD SEX), and my boyfriend tried convincing me not to. But I'd rather tell my grandfather how this felt before I waited another day. When I lied to my mother that I'd 'probably' gotten the UTI from 'wiping back to front,' she looked incredibly disturbed and said, 'Didn't I teach you not to do that when you were a little girl?!'

But we went to the doctor and I got some pretty pills that worked almost immediately. For the next two UTIs, I went to the doctor as soon as my vagina started to sting even a little bit. (I really love medication. My immune system is probably shot.) Also, I started being able to tell immediately after sex if I'd gotten a UTI or not. I don't think this is medically possible, but I trust my body, and one night my vagina started to sting as soon as my ex and I finished. Diagnosis the next day: UTI #3.

11. Honestly, ouch. But good for you, girlfriend.

My boyfriend and I were banging, and he went in really hard, at a terrible angle. It hurt so bad that we had to stop. Even the next day it felt like I had terrible cramps. Fast-forward to a few days later, when I'm at the ob-gyn for a checkup. She's feeling around in there, and she gets this weird look on her face. She presses something, and I yell in pain. Turns out he hit me so hard with his dick that I actually developed a RAISED BRUISE INSIDE MY VAGINA. She was so confused about it and had to ask me if he was "well-endowed" because shed never felt that before on anyone. It was embarrassing, flattering and hyper-weird all at the same time. Good news, though: I'm STD-free!