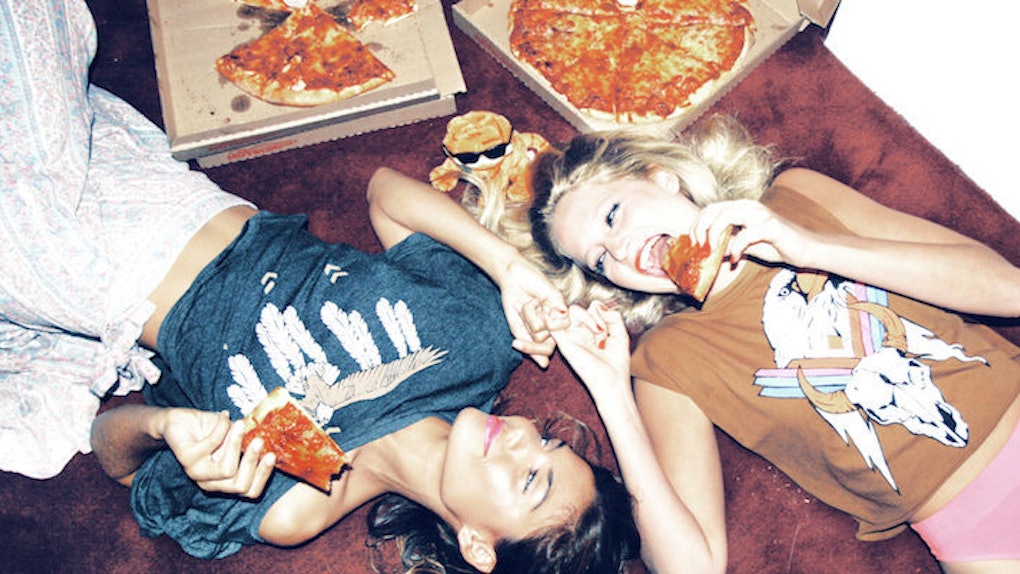 Blame It On The Alcohol: Why It's Not Your Fault You're A Hungry Drunk

"Drunk-angry" is on our list of favorite emotions: You suddenly become enraged by stupid, silly things that would never get you riled up otherwise. Instead of apologizing to the girl whose foot you stepped on, you might feel the need to call her a c*nt and shoot her a dirty look. You know, things like that.

"Drunk-horny" is another animal altogether: You find yourself texting your college booty call at 3 in the morning and asking if they still think you’re hot enough for a quickie in your curly-hair-covered bed.

Then there's the worst of them: "drunk-hungry."

It’s when you spend all night taking shots and have reached that point of no return when you realize your only friend is the dude that mans the halal cart on the corner. Sure, you might’ve sworn off that meaty rice goodness after the third time you developed food poisoning from it, but it’s 5 am, you’re still drunk and there’s nowhere else open.

Being a hungry drunk isn’t uncommon. Alcohol is, after all, a depressant, which will make you sad enough to not give a sh*t about your diet or having four slices of questionable dollar pizza.

In science terms, that depressant effect slows down or curbs the activity of the central nervous system as well as tickles our pleasure centers.

“By increasing the activity of gamma-aminobutyric acid (GABA), people when highly intoxicated may engage in behaviors that they would normally do when sober,” Dr. Mike Fenster, author of Fallacy of the Calorie said. "These can run the gamut from violent or sexually flirtatious behaviors to less immediately destructive impulsive and risk-taking behaviors."

Basically, you’re chemically wired to want all the late-night Taco Bell you can get your hands on — and it’s not even really your fault.

Research is on your side: It’s not your stomach that wants the burrito, it’s the alcohol tricking the stomach into wanting it.

"Several studies have shown short-term stimulation of appetite by alcohol ingestion,” Dr. Fenster said. "likely through the pharmacological action of alcohol on the appetite control system, either through enhanced orosensory reward, impaired satiety or a combination of both."

In plain language, you want food because alcohol screws with your appetite control system by making you crave cheesy goodness or by boosting your hunger levels — even when you’re not really hungry.

What’s arguably worse? There really isn’t much you can do to totally kick the cravings to the curb.

You can try the abstinence approach (aka, no more alcohol) but let’s get real and assume you’d rather play in traffic than ditch your Thursday happy hour margaritas.

Your best bet is to think two steps ahead. If you develop a sweet tooth every time you get hammered, keep a 100-calorie chocolate bar in your clutch or a box of Skinny Cow ice cream in your freezer so that even if you have to indulge, you can still keep it light.

If you’re craving an ultra-greasy slice of Sicilian, force yourself to wait until the morning. Chances are when you wake up, the last thing you’ll want is something that’ll make you puke on contact.

Also, if your friends decide on a last-minute IHOP run, avoid at all costs. Sure, syrup-laden pancakes might sound great to your tequila-fueled brain, but you’ll regret them in the am. Ditch your friends and head home — it’ll be the smartest decision you made all night.

"Whatever the exact mechanism, the result is that when you get drunk alcohol storms your Bastille of inhibitions and sets loose those hard-wired, instinctive and pleasure filled behaviors. And when it comes to food, those rioters are the salty, sweet and fatty treats that are our own La Fête Interne."