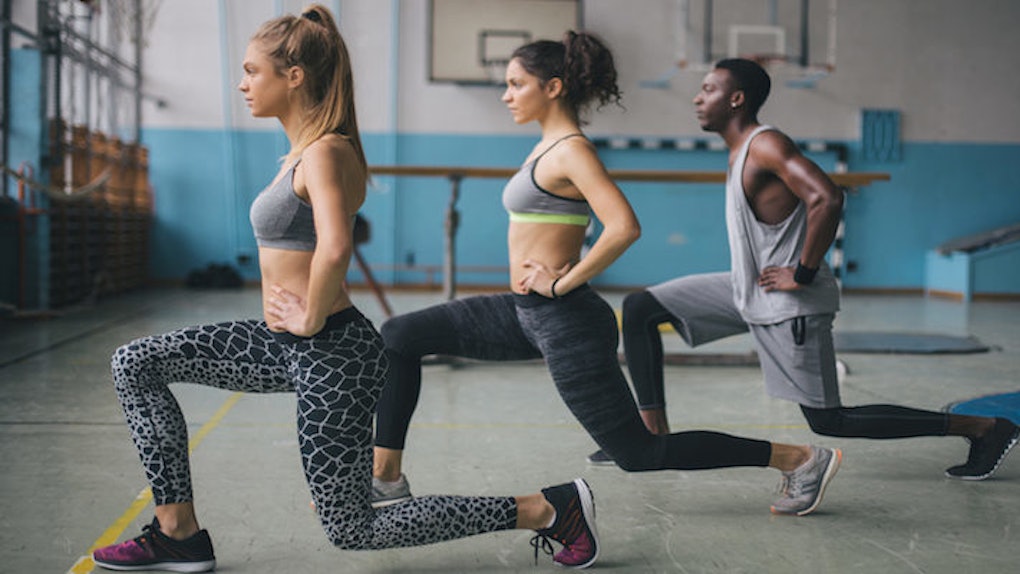 I've been on a workout kick lately. I'm on my way to (hopefully) achieving the body I've always wanted, and I have to say I owe it to group workout classes.

I've been an avid gym-goer for quite some time now. But once I stopped doing my own thing at the gym and started going to group workouts, I've not only felt way more motivated to go, but I'm beginning to actually see the results I've wanted for so long. Group workouts are great because being around other people isn't intimidating. It's just the opposite. It pushes you past your limits, even when you want to drop to the floor and give up.

But I get it. You may not be the kind of person to actually enjoy Zumba, where you sway to Latin music with a bunch of other peeps, or kickboxing, which is intense AF. But fear not, because I've got each one of you covered. Read on to find out which group exercise class you should try out, according to your zodiac sign.

The Aquarius is honest and loyal. People born under this sign thrive when they're around other people because they're natural-born humanitarians. But they're also unpredictable, independent, unemotional and somewhat detached.

For them, I choose the trampoline workout (which I just recently tried and fell in love with). This fast-paced cardio exercise burns a ton of calories in probably the most exciting way imaginable, and because Aquarius people are so hard to pin down, they would be the type to love spending an hour jumping into the air, not knowing if they'll even make it back down. (I swear that this exercise method works.)

Pisces people are intuitive, sensitive and imaginative. They're also the most open-minded of the star signs, making them both selfless and trusting when it comes to interpersonal relationships, but also projects they choose to tackle.

Because they're so easily adaptable, I choose a calisthenics workout for them, which is just fancy fitness talk for "bodyweight training." Bodyweight training requires no equipment, and involves a variety of motor movements including all of the muscle groups, and a Pisces would have no problem flowing from plank to push-up.

People born under Aries are goal-oriented, making them awesome leaders. But they also tend to have short fuses and they need to get better at focusing their energy in the right places. They often try to handle too many projects at once and fail, so I wouldn't recommend a full-body workout for them.

Barre workouts are all about using refined moves to both sculpt and strengthen muscles, making them lean rather than bulky. It's a minimalist approach towards working out, and one of the most focused of all the types of exercise. Aries would appreciate those subtle yet noteworthy differences.

Taurus people are good at sticking to a workout plan, because they're incredibly committed. But they also crave stability and don't like sudden changes, which is why something like a circuit workout with quick bursts of cardio may not be very fun for them.

They're more likely to enjoy a cardio workout that stays relatively consistent, like cycling. Taurus, it's time to get a SoulCycle membership. (Hey, it's all the rage for a reason).

Gemini is the sign of communication. People born under Gemini are curious about the world around them and are constantly looking to evolve and adapt by moving forward from past experiences quickly. They're quick on their feet.

Gemini people have a unique ability to move forward and adapt, which makes them great candidates for kickboxing classes. Kickboxing combines cardio with toning exercises like kicking and punching, and should keep them both mentally and physically engaged the whole way through. Not to mention there are chances to interact with other people taking the class, like abdominals time, which is twice as effective when you have a buddy.

For Cancers, I recommend a swimming class, because you can't just stand idle in a swimming pool. You have to just swimming (I know, I sound like Dory from "Finding Nemo"). Plus, being in water while exercising is super calming, and Cancer would still get in a good workout by swimming laps. Also, you're a water sign!

Ah, Leo. I dated a Leo once. People born under Leo are creative and enthusiastic in everything they set their minds to, but they're also incredibly pompous and stuck in their ways. You can't make a Leo do something he doesn't want to.

I think a Leo would do well with a step workout, because it's plyometric, meaning it uses quick, explosive moments to create muscle rather than long, slow movements. A Leo would be able to follow along with the instructor or customize the workout. Either way, the Leo is getting a full-body burn, and -- typical Leo -- isn't messing around.

Virgo is one of the most practical and analytical of the zodiac signs. They're not hyperemotional creatures. But Virgo people are also fussy, overcritical and perfectionists. They won't settle for anything less than what they know they're capable of, but they tend to blame themselves quite a bit.

People born under Virgo would reap the most from any sort of yoga class, because it'd do them good to get in tune with what's really going on inside of them. They'd probably be weary at first to try it -- it might not be their workout of choice -- but once they found their rhythm, they'd stick with it solely for the inner peace it brings them.

Libras are the best -- I'd know, because I am one. We're incredibly fair people, and we're also balanced (our sign is a balance beam).

But our biggest downfall is that we're indecisive, which leads us to be people-pleasers since we struggle to think independently. In fact, we're the ones who might benefit most from group classes because the routine is already laid out for us and we don't have to make one up ourselves.

For Libras, I suggest an interval training circuit - one that combines cardio and weight training - such as a military bootcamp-style class. This way, we get in aerobic exercise as well as full-body toning, and we feel like we've covered all bases equally.

Scorpio is determined and powerful in everything they do. But they are also jealous and compulsive -- two qualities that need to be kept in check, because otherwise they'll take over.

A jump rope workout would test Scorpio's limits. Jump rope workouts are only for the determined, because they wear you out quickly. I'd suggest throwing some power moves in between cardio bursts, like squats and burpees. Scorpio will crush it - as long as they start with the right mindset.

Sagittarius is optimistic, good-humored and freedom-loving. They're pretty much always in a good mood, and even when they're not, they try to look at the glass as half-full. Sometimes, though, their blind optimism can lead to carelessness.

Sagittarius would have a ton of fun in a Zumba class. Zumba is one of the latest cardio crazes, and rightfully so: it's a dance movement founded in Colombia and that keeps you moving nonstop from beginning to end. Dancers can throw their hands up in their air as high (or not high) as they want while expressing themselves through free, non-rigid movements. Sagittarius wouldn't get bored and would smile the whole way through.

Capricorn has what I call the three P's: patience, practicality and pessimism. The first two usually work to Capricorn's advantage. The third, not so much. Still, Capricorn would benefit from an exercise plan that requires meticulousness.

Pilates is perfect for Capricorns. Pilates requires buttloads of patience because it lengthens and tones the body, but it's entirely resistance-based, and uses slow, drawn-out movements to achieve results. It takes a certain kind of person to enjoy the impressive six-pack consistent Pilates workouts produce (I am NOT that person), but Capricorn is.