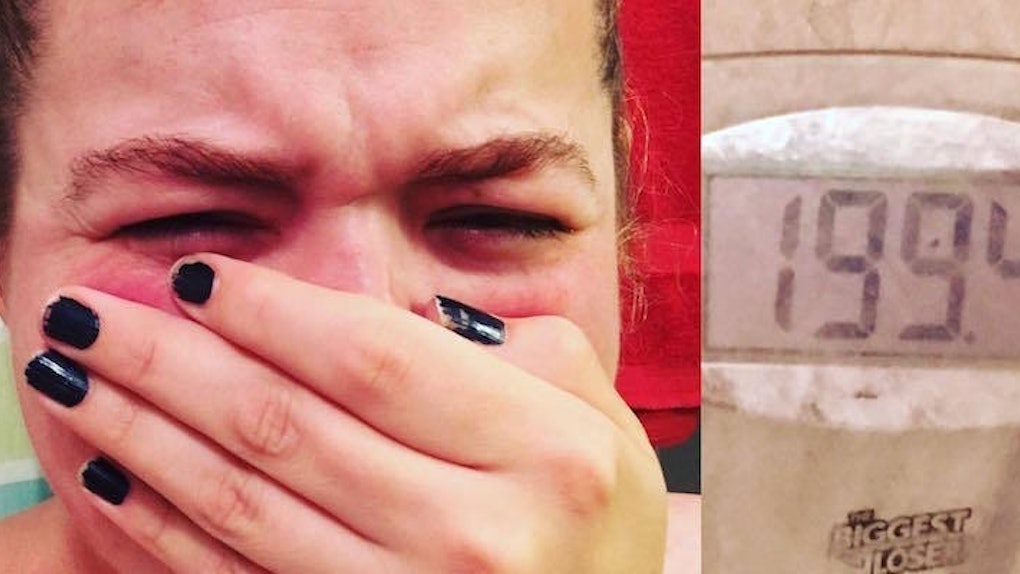 Woman Posts Pic Showing What 100 Lb Weight Loss Is Like

Losing weight can be an extremely difficult task that many people struggle with for their entire lives.

This is precisely why 29-year-old Amanda Kurtz was brought to tears the first time stepped on the scale and saw that her weight has dipped below the 200-pound mark for the first time since she was 12 years old.

Kurtz has lost a whopping 100 pounds since undergoing a vertical sleeve gastrectomy (VSG) back in May and the Philadelphia-based medical assistant has been sharing every important moment of her inspiring, often emotional, weight-loss journey on social media.

Kurtz recently posted a side-by-side photo that showed the numbers on her bathroom scale alongside a selfie that captured her teary reaction to her weight loss milestone.

The smaller stomach, which normally ends up being about the size of a banana, significantly reduces the amount of food the patient can eat, therefore helping them to lose weight.

While this type of surgery tends to be highly effective, going under the knife to lose weight is normally a last resort when lifestyle changes aren't enough to make the scale budge.

Plus, suitable candidates for this surgery usually need to have a BMI that is well over the "obese" threshold or have a medical problem that could be improved by losing weight.

Apparently, Kurtz had first tried to clean up her eating habits by joining Weight Watchers. While she did have some success with the program, Kurtz was never able to maintain her smaller size.

Her decision to get surgery finally came when she went to a hockey game and realized that she was too big to comfortably fit into the seats.

I couldn't even fit in the seats anymore without squeezing myself in, So I hit a point like, 'Wow, my favorite thing to do I can't even enjoy it because of my weight. I need to do something.'

Although surgery may seem like an easy way to shed some pounds, Kurtz serves as living proof that losing weight with the help of VSG comes with a lot of challenges.

Kurtz was placed on a liquid diet in the weeks leading up to the procedure and had to stay in the hospital for several days after the completion of her two-hour surgery.

Kurtz's struggles didn't end there either: She's had to learn how to eat all over again with her smaller stomach size.

In the six short months since her surgery, Kurtz has been able to reduce her MBI from 50 all the way down to 33.

Kurtz has been sharing her experience on social media and posting everything from her diets and workout plan to her emotional thoughts about the process of losing 100 pounds.

I really want people to know that if someone like me can do it, even the assistance I had with the tools and getting the surgery, it's possible. I'd hoped that I would get to this point, and it's kind of been a mind game since surgery. The changes have happened so fast, and I'm still trying to catch up with everything. But I feel so much better about myself in almost every aspect.

Kurtz's ultimate goal is to have a BMI of 24, and based on the way things have been going, we're sure that this dedicated gal will get there in no time.

Citations: This Teary Selfie Shows The Emotional Impact Of Weight-Loss Surgery (Self)