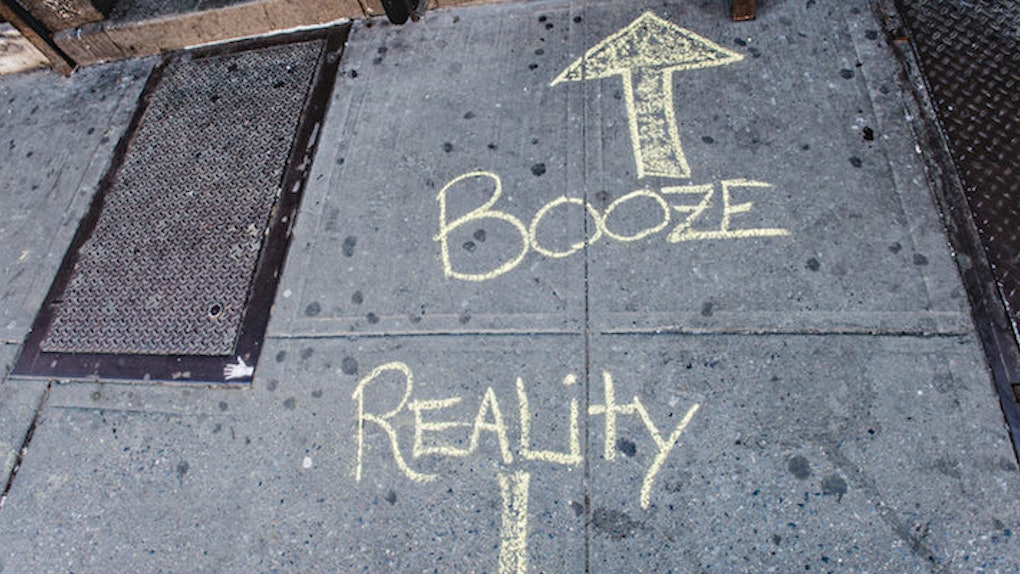 July and August are designated hardcore drinking months. Something about the summer — the sun, the holidays, the freedom of wearing less clothes — makes it perfect for downing drinks at unacceptable hours (a bit like Christmas, except you can sit outside).

But then it happens. September draws closer, the fatigued, chubbier version of yourself has arrived, and you realize there are consequences for your actions (again, a bit like the aftermath of Christmas).

The smell of tequila haunts your dreams, and you utter the words "I am never drinking again."

Usually, in the midst of Dry January, this is a rule broken three days after New Year's Eve at your local bar's Wine Wednesday.

But, if another hungover Thursday dizzily sat at your desk isn't enough to convince you to clamber onto the sober wagon, then here are seven other reasons you should indulge in a detox month during the month of September:

1. Your weekends feel at least half as long as they should.

In the fall, you usually only have the weekends to rage. So, every Saturday, you wake up way past midday after a fierce battle with your pounding head to lie back down after bursting awake, confused and dry-mouthed at 9 am.

And then, you spend the last few hours of your weekend hidden underneath your duvet.

You move for three things, and three things only: dashes to the toilet, water and to stretch to your laptop to play the next episode after Netflix so rudely asks if you're still watching.

But if you're sober, you get your whole weekend back.

2. You've been bloated for slightly too long now to actually call it bloating.

Your trusty Topshop ripped skinnies (that usually feel as if they were painted onto your body by angels) aren't just tight after an all-you-can-eat buffet, two beers and maybe even a dessert anymore.

The zip requires a little extra pull when you wriggle yourself into them first thing in the morning.

Bloated for over a month? What's the wine equivalent of a beer belly?! Stop drinking in September, and your skinnies will never fail to fit again.

3. Your version of the "Sunday Scaries" is looking at the receipts in your purse the next day.

How come you only remember being in two of them? And how come more and more keep appearing as the week goes on?

Why do they always fall out of your purse whilst paying for your morning coffee? Will the shame ever end?!

Yes. The shame will end when you finally take a drinking break for both you AND your wallet.

4. Your skin is waging a 15-year-old style battle against you.

No amount of tee tree oil and overnight seaweed gels will bring your skin back into its 20s.

And apparently NO amount of makeup will cover the chaos that crate of beer unleashed upon your skin. Do your face a favor, and let the crisp Fall air of September sooth it back to sober health.

5. No one believes you can do it (and they have fairly good evidence to back up their claim).

There's nothing more annoying than your friends thinking they know best and trying to bully you into temptation, but there's also nothing better than proving them wrong.

So, why don't you prove to them that you can take a break from the partying? Use the month of September to cleanse your liver of the alcohol, and your friends of the judgment and doubt.

6. You want to actually do something with your free time.

Maybe giving up drinking and attempting to start that Saturday morning yogalates class is too much of a transition all in one go, but what else are you going to do now that you're not spending your weekend mornings pining for a McDonald's delivery?

Saying goodbye to the delicious, greasy McDonald's will be hard during your sober month, but it'll be worth it.

7. You want to do something worthwhile.

Give yourself that little extra motivation to hang up your boozing shoes by raising money whilst doing it.

It may not be as inspiring as running a marathon or diving out of a plane, but it's a great challenge to set for yourself in the name of charity.

Plus, it will keep you on the straight and narrow. Think of the guilt you'd feel sneaking that cheeky sip of rum and coke right before you get applauded for *ahem* selflessly helping others by resisting the drink.

Imagine a brunch without retching, bedding that's not ruined by last night's makeup, a purse full of dollar bills (well, a couple, but it's quite a small purse so...).

Bring it on, Sober September.