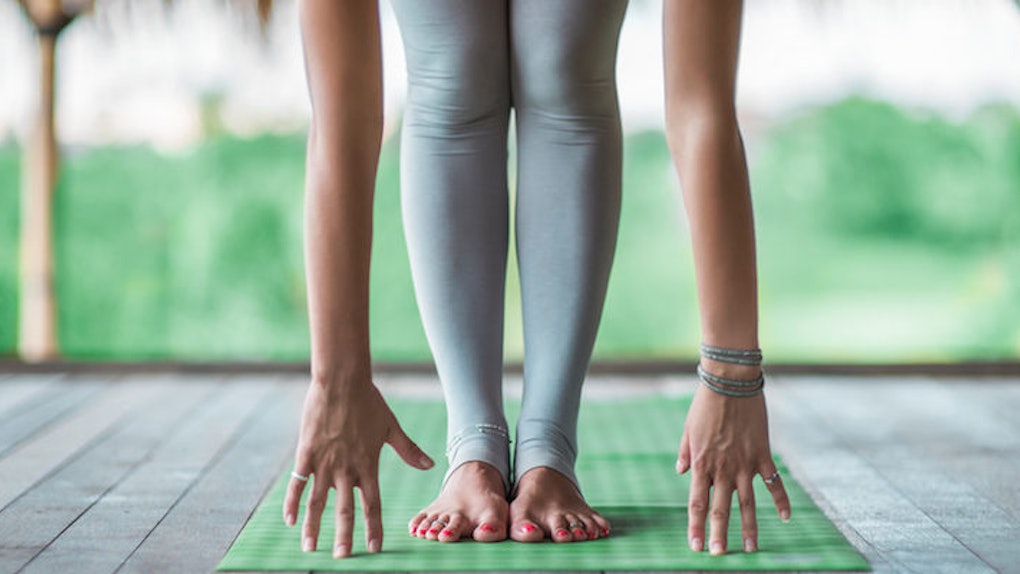 Once upon a time, the only type of yoga out there was... yoga, plain and simple.

Now, it seems like there are a million different types of yoga classes to choose from. Do you want to be doing your downward dogs in an 86-degree room? How about 100? Or do you want something more chill?

Truth be told, even as someone who has tons of experience with yoga, I have a hard time figuring out what it all means. And even when I do, it's hard to decide which type of class I'm in the mood for.

While there's no way I can cover every single type of yoga out there, I have broken down some of the more common types so you know what you're getting yourself into before you sign up for your next yoga class.

After all, who wants to walk into a room thinking it's going to be an hour of easy stretching only to find out he or she will be expected to stand on his or her hands?!

Not me. Without further ado, let's get started.

As the name suggests, hot yoga gets pretty sweaty.

Most hot yoga classes are flow-based and about 60 minutes long, meaning for a full hour you'll be moving through a series of yoga poses at a pretty fast pace.

It's also pretty steamy in there. The humidity is usually around 40 percent, and temperatures start around 86 degrees Fahrenheit and can reach a whopping 105 degrees.

If you're looking to get a solid, sweaty workout out of your yoga class, this is definitely it.

Due to its growing popularity, I didn't think it would be fair to leave aerial yoga out of my roundup. It's also so. much. fun.

Aerial yoga involves a (very secure) swing that will help you comfortably tip upside down and fly through the air.

It may seem intimidating, but aerial yoga is a blast. Trust me, you want to try it at least once.

While Bikram yoga is similar to hot yoga, the method is slightly different.

Most Bikram classes are 90 minutes, and you'll move through 26 different postures, so it's a bit slower than a classic hot yoga class. Here's the catch, though: The studio is always 105 degrees Fahrenheit.

I know. It's all very scary.

While Bikram isn't really my thing, it's worth trying at least once. Some people love it.

You won't burn a ton of calories at a restorative yoga class, but you will spend the entire time feeling super zen. Your entire body will open up. You may even fall asleep.

A lot of restorative yoga classes involve props, which your instructor will teach you how to use, so don't worry about going into it blindly.

Restorative yoga classes are great for when your whole body is aching and you need to open up your back, hips, hamstrings and anything else that hurts.

Hatha is all about postures -- think Bikram without the crazy-sweaty room.

Hatha is great if you're a beginner because you'll get a workout in and have a little more guidance than you would in a classic flow class.

Hatha is also great when you want to focus on alignment as you'll hold poses for a bit longer, which will give you enough time to nail the poses and open up your limbs.

Vinyasa is all about the flow.

Vinyasa typically starts out with small movements and breathing and then moves into more of a flow sequence, during which you'll probably break a little bit of a sweat.

Don't expect too much help from your instructor during a Vinyasa class as it's pretty fast-paced, but you can expect a pretty decent workout and a good stretch sesh.

If you ask me, Vinyasa yoga has it all.

Now, go out there and get your downward dog on. Namaste, y'all.