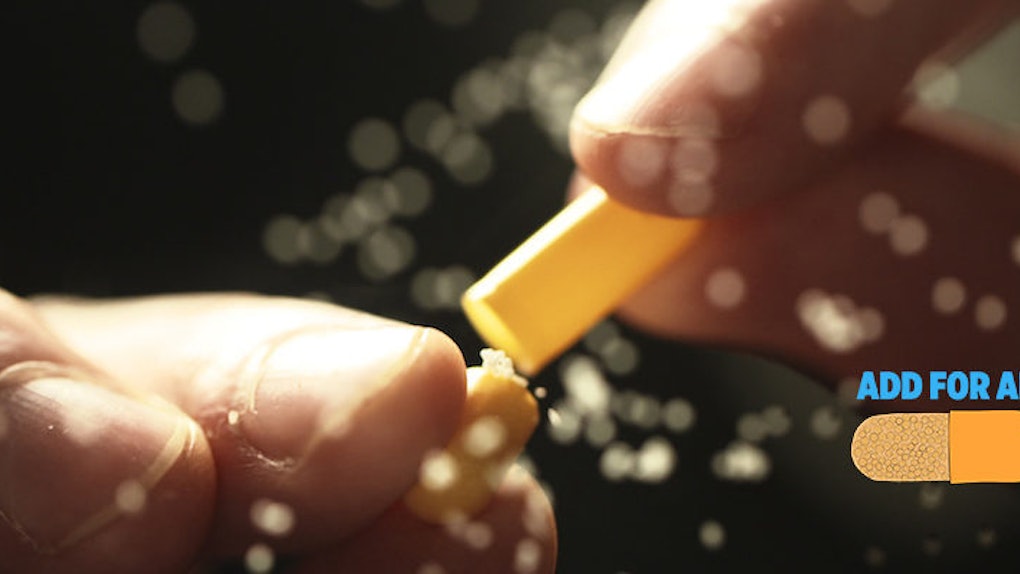 I was first prescribed Adderall in seventh grade, and I took it for 12 years until I decided to stop.

What this means is, I spent all my formative years on Adderall, which is a prescription drug said to stunt growth in the children who are on it.

For reference, I am 6 inches shorter than my three siblings, I didn't get my period until I was 18 and after paying my own taxes for eight years, I still have two baby teeth in my mouth with no sign of any adult ones coming in.

By the time I was 25, I was taking 60 milligrams of Adderall per day, which is a ridiculous amount for someone who's only 5'3".

Around that time, it started to really bother me I literally couldn't face the day without it and that the thought of doing so terrified me.

And because I am a badass warrior for truth, I decided to take myself off Adderall.

But, I didn't do it cold turkey. I actually did it as slowly as I possibly could, and I told my therapist, my psychiatrist and my closest friends about it.

I gave myself a year to slowly taper off, 5 milligrams a time, giving myself a month to adjust before going off another 5 milligrams.

Having done this as slowly as I did, I cannot believe people go off Adderall cold turkey.

Even though I took my time and was gentle with myself, I suffered through the same withdrawal symptoms as anyone who goes off this powerful, powerful drug.

The most immediate and overwhelming side effect of going off Adderall is fatigue.

Every time I lowered my dose, I felt exhausted. I would sleep through appointments sometimes, and I was late for things because it just took me so long to get moving.

I hear this happens more often with people who go off it cold turkey, as you feel extremely sluggish.

It also took a STUNNING amount of energy to talk.

I was speaking so slowly just because I felt like I couldn't gather my thoughts as quickly as well as when I was on prescription speed.

Now that I look back, maybe I was just talking at a normal pace, but my brain wasn't used to forming thoughts without the help of Adderall, so I felt like I was pulling thoughts up one at a time through a pit of quicksand.

My interest in social activity was gone for a year. And whenever it would return, I had to lower my dose, starting the whole process all over again.

Even though I was suffering from an eating disorder at the time, I didn't work out while weaning myself off Adderall. I just gave it up.

I expected to gain some weight, so when it happened, it wasn't totally shocking for me. I probably ended up gaining 5 pounds, but weirdly, by the end of the year, my weight had leveled off.

I ended up in better shape than when I had started the process, and I was also working out in a way that wasn't compulsive.

After about six months, I felt like I was getting in touch with that fun, funny, wild girl I was as a kid. I was happier, I was more sociable and I just felt so much more AUTHENTICALLY me.

It was as if I was seeing myself for the first time.

I was more energetic than I had been in 12 years, or at least it felt like I was because my energy was real. I wasn't minutes away from crashing, always chasing that next burst of Adderall.

From the time I was diagnosed with ADHD until I decided to go off Adderall, being hyped up had become my entire reality.

I felt like a slave to that bottle of pills, and when I finally was off them, it was like I was finally free.

I was so, so proud of myself for making that decision, and if you're thinking of doing the same thing, I can't recommend it enough.

Even if you're like me — someone who has been tested and diagnosed as having ADHD — and you want to lower the dose you're on, I would encourage you to talk to your doctor.

At the end of the day, your body and your health is in your hands, and you have to look out for yourself.

While there are those out there who are careful to say, "Of course, there are people who really need Adderall," I am not one of those people.

I do believe, however, that THINKING you need it is the same thing as actually needing it. That's how much power our beliefs have over our realities.

So, my only advice is to examine how you really feel about taking Adderall, both the good and the bad. Be brutally honest with yourself, and write it down so you can see it on paper.

Then, see where that takes you.

If you are inspired to do something about it, great. If not, great. To each her own.