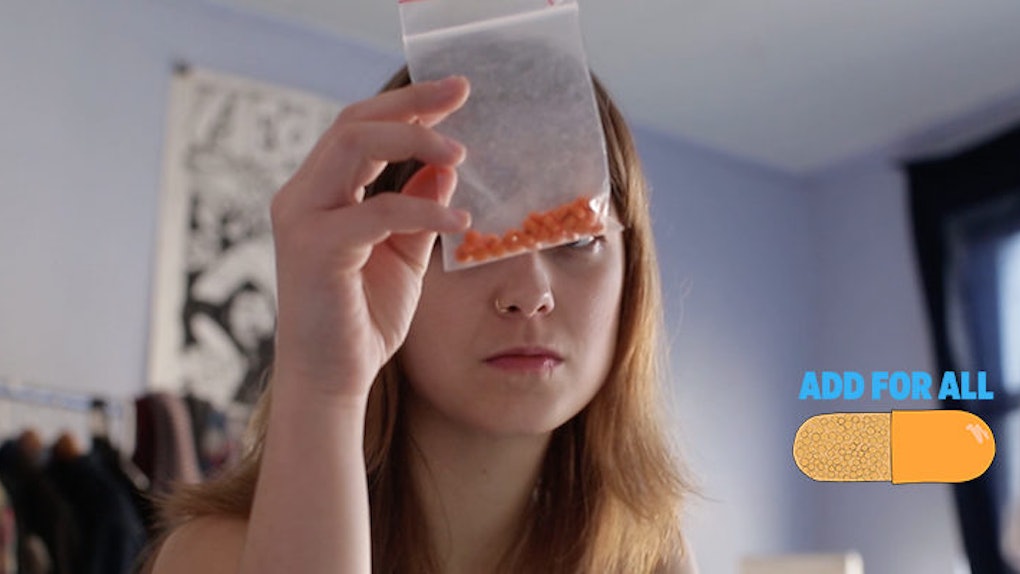 I Used Adderall To Lose Weight, And It Ruined My Life

When I was about to graduate from college, I started to develop an eating disorder by the jolly old name of anorexia nervosa.

It began when my college boyfriend and I had broken up, and I was six months away from entering into the adult world alone.

So, I responded to the challenge of entering the working world by rendering myself as helpless as possible.

Lucky for me, I had the assistance of a prescription drug called Adderall (you've all heard of it), which made basic human needs like eating and sleeping no longer necessary.

It was like cocaine without the comedown, and it lasted for hours.

I had always been on the drug, and I hadn't abused it up to this point.

But when I started losing weight at such a fast pace (because of the self-imposed starvation on top of the compulsive exercising), I decided to enlist the help of those little orange pills.

I thought I had found the answer.

I could exercise for hours at a time without so much as eating an apple to keep going. I thought I could take control of my weight and become so thin that people would greet me with enthusiastic phrases like, "Do you need a ride to the hospital?!"

I went home over winter break (following the split with my ex) and started running about 6 to 7 miles a day.

By the time I got back to school, I had lost about 10 pounds, and the support was incredible

But then, I kept losing weight.

I lost so much weight (20 pounds, to be exact) that I started losing the hair on my head, and I was growing a thin layer of white hair all over my body.

I looked like I was about six months into my transition from woman to newborn baby snow leopard.

I stopped getting my period, which didn't return until about six months after I started eating again, which meant that I didn't have one for about a year and a half.

Because I was starving and hopped up on the legal speed that is Adderall, my body was basically running itself on adrenaline, and my mind was constantly in a state of paranoia.

When friends would tap me on the back just to say hello, I'd scream like they had jumped out at me in a vacant parking lot.

By the time we had reached graduation, my family hadn't seen me since Christmas, and my sister came to Boston to support me at this important moment of my life.

Although graduation was a big deal, it was like a footnote in my mind because I wasn't fully grasping what was happening around me.

I'll never forget the look on my sister's face when she saw me.

When I went to open the door of my apartment for her, she went from being so excited to see me to withdrawing in total silence.

A few minutes of casual conversation went by as she quietly wrestled with the question of whether or not to say anything to me, and then she burst into tears.

I don't remember much from that time.

The entire span is like memories of my childhood: just little flashes of things, though I couldn't place the when or where of them all.

But, I remember my sister's face when she saw me literally starving myself to death and being completely hyped up on pills that had been prescribed to me as far back as the sixth grade.

Adderall was supposed to help me get through school. That's why it was prescribed to me.

It was first suggested by my teachers and then co-signed by a doctor, in spite of the fact that addiction and alcoholism ran in my family.

I did get through school, but by the skin of my teeth.

And at what cost?

Someone recently asked me if I resented the people who prescribed me Adderall in the first place.

While I used to blame my parents, I'm now old enough to understand they weren't educated enough to know what the right thing to do was.

I blame the schools, the government and the all-encompassing greed of the pharmaceutical companies that peddle that shit to children in the interest of money.

That is what disgusts me.

I'm nine years sober, I have a good life, and if I ever have a kid, you'd better believe I'm not putting them on the crap I was put on.

Because I'm now old enough to know that ADD and ADHD is a pharmaceutical con that doctors and companies invented to diagnose creativity as a disorder.

And I will never buy into that again.