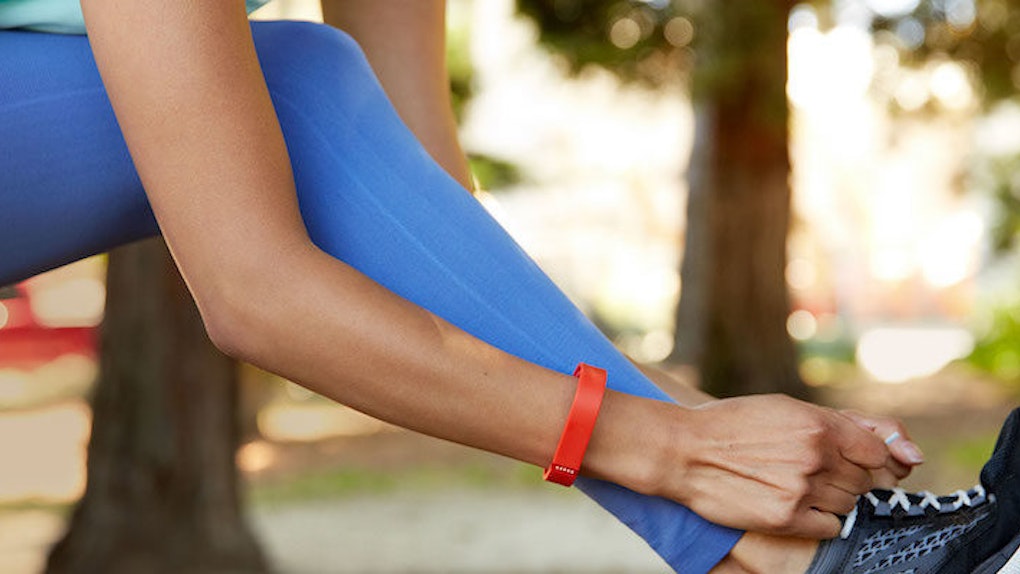 8 Signs You're Completely Addicted To Your Fitbit

It starts out innocently enough.

You pop into London Drugs to pick up a fresh pack of hair elastics (Where do they all go?) and pass by an entire wall showcasing shiny, new gadgets: Fitbit, front and center.

Since you've been meaning to get back in shape anyway, you pick one up. And it's not that big of a deal.

But after a few weeks, you realize just how sedentary your current lifestyle is.

Even if you do fit a workout into your day, 10,000 steps is a lot more than you're currently clocking in your average day.

You learn that one serving of pizza is one piece, not one pie, and according to Fitbit, you're eating too much of it too often. And you're definitely not drinking enough water.

The red flags start to appear, but still, you carry on, setting loftier goals and increasing your calorie deficit. You avoid all of these (big) red flags like they're your ex-boyfriend's new girlfriend (or your new boyfriend's ex-girlfriend).

Here are eight sure signs you might be a little too addicted to your Fitbit:

This isn't necessarily a bad thing. It's great for your health, it's great for the environment and it helps you reach your step goal.

However, it does become a problem when you actually have places to be and people to see.

Apparently, it's not all that acceptable to keep a client waiting because you walked to your meeting instead of taking public transit or driving like a normal 21st-century human being.

It's also not the best idea to show up sweating in sneakers, with no time to change into your Aldo's.

The “sorry I'm late, but I had to get my steps in” excuse will not only procure a very strange look from non-Fitbit-addicted folk, but it's also just not valid in the real world.

2. You brush up on your math skills.

Remember all those times in high school math class, staring at the board as numbers and formulas blurred into one another and wondering when you're ever going to use this in the real world?

Now is your time to shine. Fitbit is a game of numbers.

10,000 steps a day is approximately five miles. If it takes 10 minutes to drive somewhere, then it's approximately an hour to walk, which is about 50 percent of your daily step goal.

There are 260 calories in a single slice of Panago's chicken club pizza. If you want to eat three slices, you have to leave the house at least an hour before your meeting, so you get enough steps (there and back) to offset your caloric intake and effectively lose three pounds by April.

When you're addicted to your Fitbit, not reaching your daily step goal is simply not an option. So you pace. You pace circles around the island in the kitchen. You pace lengths in the hallway. You go up and down the stairs until your legs burn.

And you try to do this all very nonchalantly, so your boyfriend doesn't clue in to what a complete lunatic you are.

4. Fashion takes a back seat.

It's easy enough to hide your Fitbit in the fall or winter months.

But the next thing you know, it's summer time, and not only are you wearing a backpack to carry your fancy shoes in, but it's impossible to hide your clip-on Fitbit when you're wearing short-shorts and a body suit.

Even though you've always been the type of girl to match her undergarments to her bubblegum, the only thing that truly matters is your Fitbit, now. Fitbit is life, so you wear it loud and proud for all the world to see.

Entirely opposite from the rules of Fight Club, when you're part of the Fitbit community (aka Fit Club), you let people know.

No matter who's around you at any given time, reaching your daily step goal becomes public information. (This, sometimes, warrants weird looks from strangers, who don't care at all that you won your “workweek hustle” challenge.)

6. Your schedule revolves around Fitbit.

More specifically, it revolves around when you can charge it. The ideal times for charging your Fitbit are very, very few and far between.

Sure, the obvious option is that you could charge it while you're sleeping. But then, you miss out on analyzing your snooze session, and every true Fitbit addict knows all things must be tracked.

There's really only one or two ideal times to charge it: while you're taking a bath or while you're watching an episode of "Girls" (or doing both simultaneously).

Once your calorie meter starts trending toward the red zone, though, you slowly start cutting your intake by a lot.

Because of your Fitbit, you have a basic understanding of how you must burn more calories than you eat (or drink) to lose weight, so you start tracking.

Taking total guesses at serving sizes and rounding up for good measure, you manually enter every morsel of food you consume into your handy Fitbit food tracker.

When you binge at lunch on a big-ticket item (read: pizza, again), you end up going hungry for the rest of the night, not daring to dip into your deficit.

You make up excuses for why you're not eating. You start telling your boyfriend you're truly not hungry, you're not feeling well or you already ate when he wasn't looking. (You didn't.)

Things are getting out of hand, now.

Your boyfriend grows tired of going to dinner with your phone, and you begrudgingly acknowledge that maybe your insistence to walk everywhere, all the time, is a bit excessive.

Neither of you mentions the late night pacing, but the vision of yourself speed-walking laps in the living room is enough to make you listen to the words coming out of his mouth: “I think you should take a little break from your Fitbit.” He says it sweetly, in a tone that says he's not mad, just worried.

So you remove your Fitbit from your body, and stow it away in a place where you won't see it or be tempted by it.

About an hour later, when you're eating something and reach for your phone, it hits you that you're on a boyfriend-instructed time-out from your Fitbit. And it occurs to you that you might be addicted to your Fitbit.

Don't get me wrong: Fitbits and step trackers alike are great. I think they are an excellent way to focus on your health, to make activity and movement more of a priority and to help you become more conscious of what (and how much) you put into your body.

BUT, contrary to popular belief, Fitbit is NOT life.

You should be able to walk to the bathroom in the middle of the night without picking up your Fitbit for those 10 extra steps. You should be able to partake in a GNO without obsessively logging in your calories after every shot of tequila. (That sort of takes the fun out of the evening, doesn't it?). And you should be able to eat dinner, even if you've already reached your daily calorie limit.

You heard me. Put down the Fitbit, and go eat your dinner.