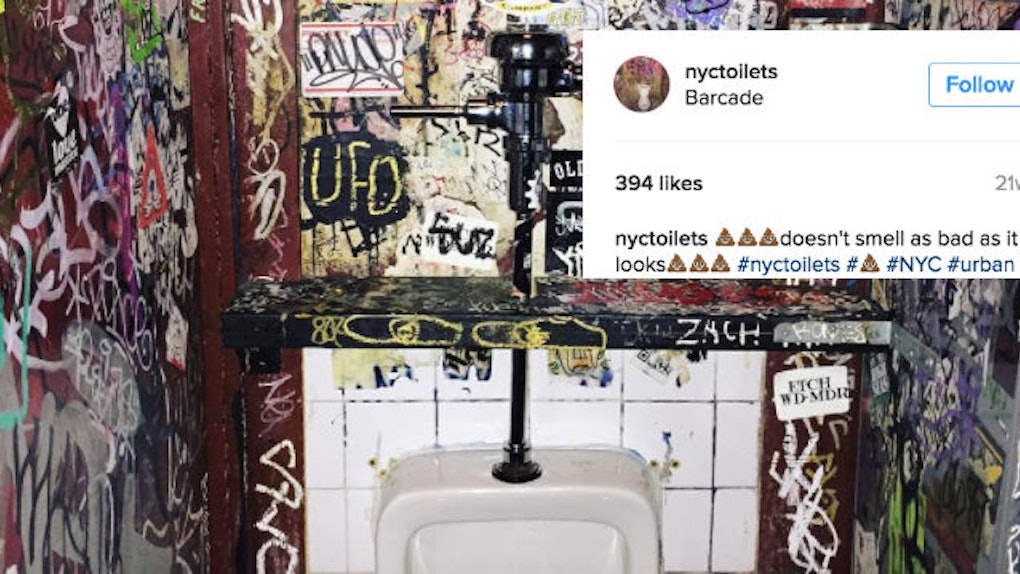 Does a bear poop in the woods? Yes, of course. What a weird question for you to ask me.

But where do humans go when they hear nature's call in the big city?

It's true: Everybody does poop and because of our needs as living human beings, public restrooms are a thing that must exist.

Thankfully, if you find yourself in New York City, there is an Instagram account that rates bathrooms using the poop emoji (which is actually an emoji of chocolate ice cream with a smiley face, but let's be real. That's poop).

Vanessa's Dumplings, which is one of my fav dumpling spots, earned three poop emojis.

The account, run by a guy in Brooklyn who wants to remain anonymous should he enter a place of business and be turned away in case he exposes their dirty toilets, was inspired by his friend.

He would receive Snapchat videos of bathrooms in San Francisco from his buddy living there.

He would spin around in the bathroom and rate it on a scale of five.

Some bathrooms are classier than others, like Lincoln Center's.

We were out out one night over Governor's Ball weekend and laughing about the whole thing, and I thought documenting bathrooms in NYC through Instagram might be fun.

I have no idea where this toilet is, but I do know it makes me nervous to pee there.

I don't like to be watched. I have stage fright.

NYC is wildly diverse and that carries through to the bathrooms of all our favorite establishments. Some are weird, some are cool, some are filthy. A lot can be funny in some way. But a lot also contain some really cool and enjoyable graffiti and art.

He ranks the Google office's toilets on 8th Ave. as some of the best. They're very high tech.

The worst? That award goes to "JFK. Or any toilet available at public transit hubs."

TRUE! Have you been to Port Authority Bus Terminal? The entire thing is a bathroom, apparently.

Bodega Pizza even lets you leave your mark -- they have Sharpies by the sink.

If these bathrooms are making you nervous about visiting NYC, let Aunty Hopey tell you a little potty secret.

Use hotel bathrooms. They're always clean, and no one knows if you're a guest there anyway. I have peed in every Hilton in most major cities.

Citations: NYC toilets are rated by poop emoji on this Instagram (Mashable)