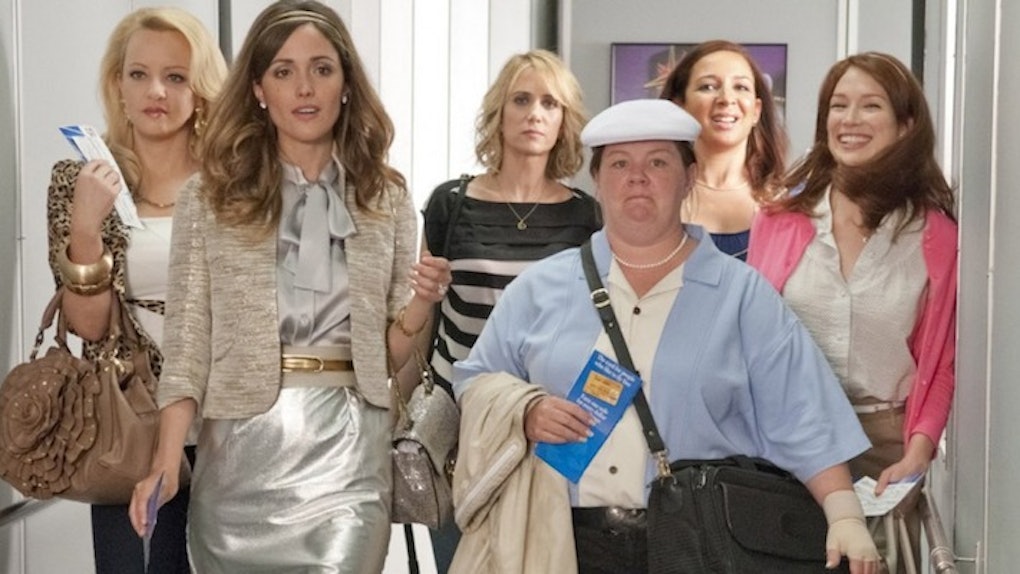 11 Types Of People You'll Find On Any Plane Ride

Although planes are romanticized as magical vessels designed to deliver passengers to their most desired destinations, most people hate the thought of being imprisoned, thousands of miles above sea level.

The sheer threat of global terrorism is enough to send anyone boarding an airplane into a full blown panic attack.

Personally, I find myself more Xanax-dependent over the minor details of flying, like receiving a busted headset, or opening my in-flight magazine only to find my crossword puzzle completed in a half-assed fashion.

But the thing that has the potential to send me into a severe nervous frenzy is always other passengers on the plane.

When the flight crew asks if I have a preferred seating preference I always answer “alone." Of course I know the chance of me sitting unaccompanied in a row where I'm not forced to share my oxygen with unfamiliar faces is nothing more than a pipe dream.

I typically survey the landscape of people at the designated gate, carefully observing the number of characters who could very well be my potential mate in the roulette of assigned seating.

Without fail, these 11 types of people will always be on-board any flight:

Overly zealous because she's celebrating her birthday or some other grand occasion in her life, this is the girl that has her hair in a messy bun, nine miniature bottles of Jack stowed in her purse and a gaping hole in the center of her face that needs to be bolted shut.

She is constantly talking and is always in a desperate search for the flight attendant so she can make insignificant conversation and get drunk on shitty glasses of pinot.

She will also cry that her Snapchat story won't upload and ramble on and on with her best friend who is conveniently also sitting in your row.

This is the eye candy and the example of a best case scenario. You fabricate how you guys are going to talk, have a bang sesh in the airplane bathroom and magically fall in love in a fashion that renders itself T. Swift song-worthy.

The fact that he looks like he walked directly out of a J. Crew ad with his perfectly ironed shirt and preppy flair leaves you soaked, and pleasantly uncomfortable. You pretend to stare out the window but really you're gazing at his arms and the symmetric structure of his cheekbones.

Just as you're analyzing his flawless genetic composition, imagining him with your future son on the DILFS of Disneyland Insta page, you look down at his hand as it swipes away on his iPad and notice a gold band on his left ring finger.

Your dreams are shattered because he's probably married to some petite girl with perfectly manicured fingers and a standard name like Rachel or Jessica. And then you think, maybe they aren't so happy and he's on this trip to escape her. Game on, optimism.

He's in a tailored suit, with a beautiful silk tie that compliments his immaculate dress shoes which are so perfectly shined you're able to see the details of your disheveled reflection.

He makes more in a week than you've ever seen in your bank account and he's always plugging numbers into his Excel spreadsheet at a furious rate.

When you ask for a diet Coke he gets a Johnny Walker neat and drinks it with the utmost sophistication. Hello real life inspiration for the Dos Equis most interesting man in the world. Pure class.

This is the individual who starts up a conversation with you over a random topic and five minutes in you know she has a daughter, Emma, who's a professional ballerina, a son, Jason, who just graduated from med school in Grenada and a new grandson named Liam. Liam was born last Tuesday at 12:04 pm and is the absolute apple of her eye.

She shows you pictures from Prague that were taken on a 2012 family vacation, followed by 100 videos of her Pomeranian dressed as a pumpkin for Halloween.

You will unsuccessfully try to put your headphones in about 20 times as a sign of politely saying "If you don't mind, I'd like to stop listening to you." Your valiant attempt at personal isolation will fail.

Her hand will manage to latch onto your arm, her baby blues will look deep into your soul and she'll spit some poetic ballot that is oozing with cliché life advice.

You find yourself with no other choice than to accept her Stepford wife wisdom and share some details of your own life (some made up purely for entertainment value).

She smells like formula and sleep deprivation, based on her stress level you don't know who's going to vomit first -- her or her bald little Yoda of an offspring.

She has a diaper bag half stowed under the seat in front of her overflowing with books, Cheerios samples and baby wipes. She's doing everything she can to get the baby to sleep, knowing damn well it will start crying at any given moment and every soul trapped 35,000 feet in the air will write her off as the bane of their existence.

The baby looks like a screamer, so brace yourself for the adventure ahead.

6. The Invader of Personal Space

There is a long list of proper social etiquette that exists when flying, and these rules were set into place to help ease the tension of being trapped in confined spaces for extended periods of time.

The invader, however, disregards all rules and regulations and feels the need to make himself overly comfortable at everyone else's expense.

Everyone knows that the person in the middle gains rights to both armrests as compensation for the abundance of inconvenience they will endure during the course of the flight. But the invader, who has made himself at home in the window seat, makes the claim for the middle bar. He also rests his head against the support of the window and adjusts his body so one foot is rested against the wall and the other is playing footsie with yours.

Half way through the flight, he'll readjust his body position so that his feet are now in a peaceful union against the wall, his head is on your shoulder and he can snore perfectly in your right ear drum.

When he's awake, his tablet is poking you in the leg, his M&Ms are spilled all over the floor and his carry-on bag has migrated into the aisle. You can't win with this dude, for he has perfected the art of annoyance.

Clad in cloth pants, a handmade headband and excretes a pungent body odor, you can only assume that this vagabond found some way to sneak drugs onto the plane and is going to talk to you about the beauty of a waterfall they once saw in Thailand.

There's no bonding with this person because, although they have a million stories, none of them make sense due to the irreversible brain cell damage their consumption of drugs has caused over the past five months.

These two look like poster children for Gap's spring clothing line and are color coordinated in the most beautiful shades of coral and peach.

They will do their best to work their engagement story into any conversation that you will potentially start and show you how perfectly the diamond shines on the future bride's delicate little ring finger.

They are in constant contact at all times and I can guarantee they'll be holding hands or lovingly looking into each other's eyes for a majority of the flight.

Touch each other all you want love birds, the closer you cuddle into one another, the more space I have to enjoy this nightmare of a voyage through the sky and remember that I can't even stay in a relationship for three weeks time.

This is the girl that is violently hyperventilating into a paper bag every time the plane jostles into a spell of minor turbulence.

When she's not humming some mantra to herself, staring at the ceiling and gripping at her grandmother's rosary like she's on the verge of demonic possession, she's staring wide-eyed at her surroundings making you question your own sanity.

This is the woman who you just can't win with. You typically piss her off within the first five seconds of being in her presence. Her personality is overwhelming and flamboyant.

She will sit comfortably in YOUR assigned window seat, and on the off-chance you decide to stand up for yourself and reclaim your territory she'll roll her eyes and give you a condescending, soul-stealing look of pure disgust and inconvenience.

She knows she's in the wrong but will do anything -- and everything -- in her power to have it her way, make her presence known and send you subtle death stares throughout the duration of the five-hour flight you're forced to endure together.

11. The Colonial Woman. On The Wing. Churning Butter.

Dressed in a bonnet and unbothered by the altitude, she just hangs on the wing in clear view churning away. Just ask Xanax, shitty Chardonnay or Kristen Wiig -- they've all seen her.