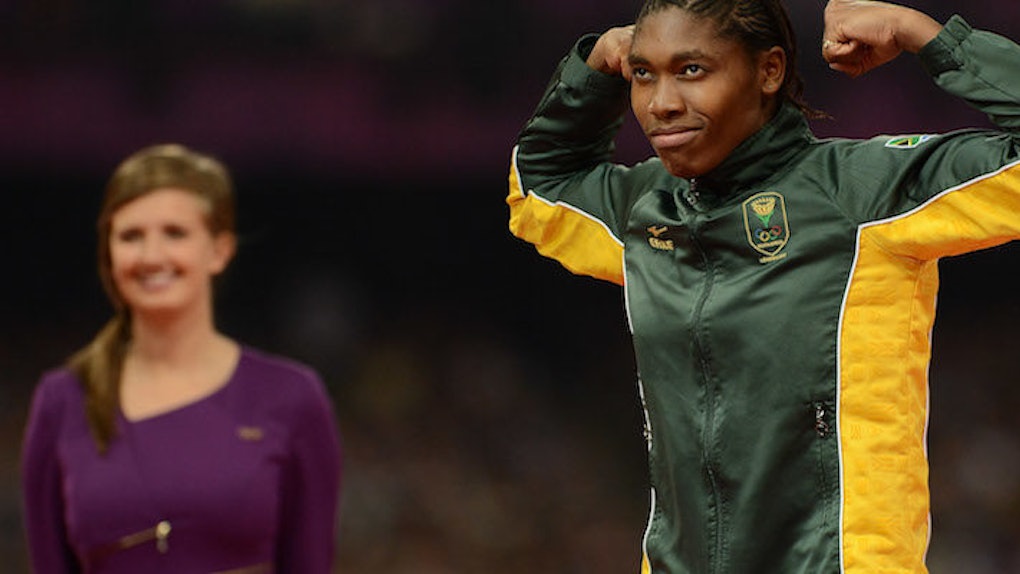 This Female Olympian With No Ovaries Raises Really Interesting Questions

But I fiercely love the Olympics. Maybe it's because I'm so fascinated by athletes. Athletes attain the ability to see physical changes in their own bodies that are directly related to the time they put into their training.

It's the opposite in the art world. My world. The Art world is wildly subjective. It's a world with no finish lines. It's a world of blurred lines.

There are no definitive answers. There is no such thing as "right" or "wrong." Who won is debatable.

This is why I wasn't at all surprised when I read that so many people are upset and confused by athlete Caster Semenya, the 25-year-old force of nature who's tipped to take home gold during this week's women's 800 m race.

If you're late to the conversation, allow me to brief you: Caster Semenya has a medical condition called hyperandrogegism. This means she has no ovaries and no uterus, and her body produces three times more testosterone than the average woman's.

Because of this, Semenya's participation in the Olympics has been stirring up some major controversy right now.

But why? Why are we singling out a woman who has a natural medical condition, especially when doping incidents — something athletes can control — are estimated to be up by a whopping 35 percent?

It's about our society still being so cringingly uncomfortable about the concept of gender fluidity. And Semenya's condition raises the question, "What exactly makes a person a woman? Is it her hormone levels?"

I don't think it's so simple or technical, because gender identity is complex. Gender has gray areas, sort of like art.

It's about our society still being so cringingly uncomfortable about the concept of gender fluidity.

Case in point: Semenya's medical condition went largely under the radar until her amazing success at the World Championships in 2009.

When her opponent, Russian runner Mariya Savinova, was asked if Semenya had an unfair advantage because of her naturally elevated levels of testosterone, Savinova (who subsequently lost to Semenya) had only four cutting words to say:

Just look at her.

The comment suggested that Semenya's more masculine appearance was direct evidence that her medical condition gave her an unfair strength advantage. (Ironically, Savinova was later caught for doping — an incident that, according to this article, earned far less scrutiny than Semenya's story.)

In 2011, the debate culminated in a ruling by the International Association for Athletics Federations (IAAF) that female athletes with abnormal levels of testosterone must take medication to lower their levels to a typical female range.

The experience was harrowing for Semenya, who told reporters at the time,

I've been subjected to unwarranted and invasive scrutiny of the most intimate and private details of my being.

After a lot of high-profile complaints and lack of scientific backing, the ruling was lifted last July.

Personally, I can't imagine how heartbreaking it would feel to not only have your gender – something that's so deeply rooted in your core identity – put into question, but to also be accused of winning because of your medical disorder, not your hard work and dedication.

Not only is the accusation a direct attack against her incredible athletic prowess, but, according to this study, there is also no scientific evidence that proves higher testosterone levels can give an athlete an advantage over anyone else.

There is no scientific evidence that proves higher testosterone levels can give an athlete an advantage.

Dr. Myron Genel M.D., a senior research scientist at Yale, has weighed in on the topic.

In an opinion essay Genel penned last week in the Journal of The American Medical Association, he presents the argument that certain genetic conditions lead to higher levels of hemoglobin, a protein that's been proven to  "enhance performance in sport." And yet, athletes who have these conditions are not disqualified.

So, how is it fair to be picking on a woman with a hormonal genetic difference that hasn't been proven to enhance her athletic performance, yet we turn a blind eye to those with higher levels of hemoglobin, which actually can enhance athletic performance?

Genel continues to break down the idea this way: Michael Phelps' flexibility and large feet give him a direct one-up over other swimmers. That is a genetic advantage, and yet, he's never been blamed for it. As Yahoo Sports perfectly points out,

It's never suggested that Phelps should step aside for the shorter Ryan Lochte because of something he can't control. Nor is it suggested that, say, Kevin Durant should remove himself from the Olympics because he's too close to the basketball rim.

Our collective freakout over Semenya is a crystal clear example of how much we shame people who don't neatly fit into societies stifling "male" and "female" boxes.

Maybe it's because sports is an industry built on the foundation of technicalities and rules, so it simply can't wrap its head around all of these newfound gray areas.

Our world is becoming more open and accepting of the notion that sexuality and gender aren't actually jet black and stark white – they exist on a spectrum.

Trans people are coming out of the woodwork and beginning to be more accepted in the pop culture, fashion and art worlds.

In other words, gender fluidity is not going anywhere.

But what about in the sports world? There are a ton of trans and gender-queer people who are athletic stars. And while Semenya is – without question – a woman, her condition is raising questions that we can't continue to avoid.

We are eventually going to be forced to answer questions that might not have solid, concrete answers.

Her story is planting the seed for a different future, one in which we are eventually going to be forced to answer questions that might not have solid, concrete answers. And that terrifies people who are blind to the shades between black and white.

Will the people who live in shades of gray be exempt from having their exploding moment at the Olympics just because they don't fit the Olympian standards of what it means to be a man or a woman?

But here is the greater question: Is it up to the Olympics to define what makes a man or a woman?