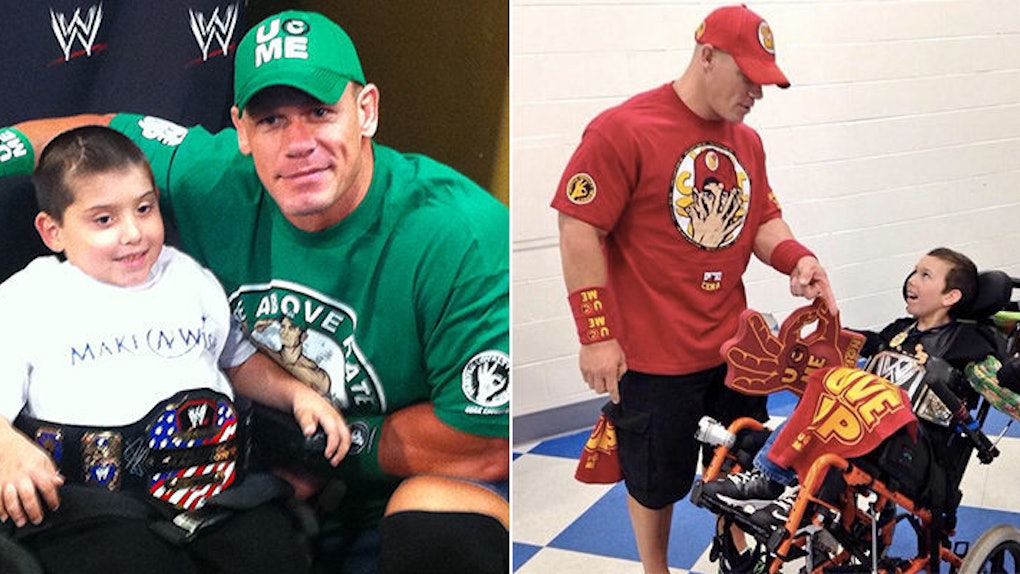 John Cena Granted Over 400 Make-A-Wish Dreams, More Than Anyone Else

Even if you don't like John Cena, you better damn well respect him.

It's no secret he's one of the most charitable superstars in the WWE, and has one of the biggest hearts in all of entertainment, but a recent milestone put him in a class all his own.

According to the Make-A-Wish Foundation, Cena officially granted his 400th wish to a 9-year-old named Mark during a WWE match at Staples Center in LA.

John Cena is one of the few wrestlers who genuinely cares about fans, and he shows it.

John Cena's commitment to changing young lives around him is something that's lost these days, especially in sports.

However, he understands his lane as a role model and inspires millions of kids with a message of hustle, loyalty and respect.

Here's just an example of some of the incredible work he's been doing outside of the ring since 2002.

Cena's big heart is often overlooked for his in-ring persona, which is that of a good guy who always wins.

Naturally, the WWE Universe isn't always going to gravitate toward a wrestler like that, but for the young kids battling different struggles in their lives, there's no better hero to look up to.

Not many wrestlers will break character and give back to the fans like John Cena.

John Cena is one of the most talented wrestlers in the business, but he knows his legacy outside of the ring is what's most important.

But, Cena earned his stripes, too. Going head to head with many of the biggest superstars of yesteryear, he is the bridge between the last generation of superstars and today's.

His tag team match with HBK against Undertaker and Batista solidified his status as a WWE superstar.

He is one of the kindest people I've ever met. I think the thing that can't be forgotten, in the 400 wishes that John has granted, is that John realizes the impact of a wish come true. It's not just a moment for these kids, but it's something they can look forward and something they can reflect on afterwards.

Even though he has such a big heart, this is the kind of disrespect he receives on a weekly basis.

Go to any wrestling event and every "Let's go, Cena!" chant is immediately followed by a "Cena sucks!"

That's just a part of the business for every wrestler, though.

Still, he will continue to impact more lives and grant another 400 wishes.

John Cena doesn't get half of the respect he deserves from the WWE Universe.

He's no Steve Austin or Rock, but he's the biggest wrestling superstar of our generation, and to the young children of the PG Era, he's much more important than that.

He's a reason for hope, and he's proof even our biggest heroes can take the time to let fans know they care.

No matter what happens, Cena will always be there for his biggest fans.

Love him or hate him, John not only bagged Nikki Bella with pure ease, but he's changing the lives of children every day.