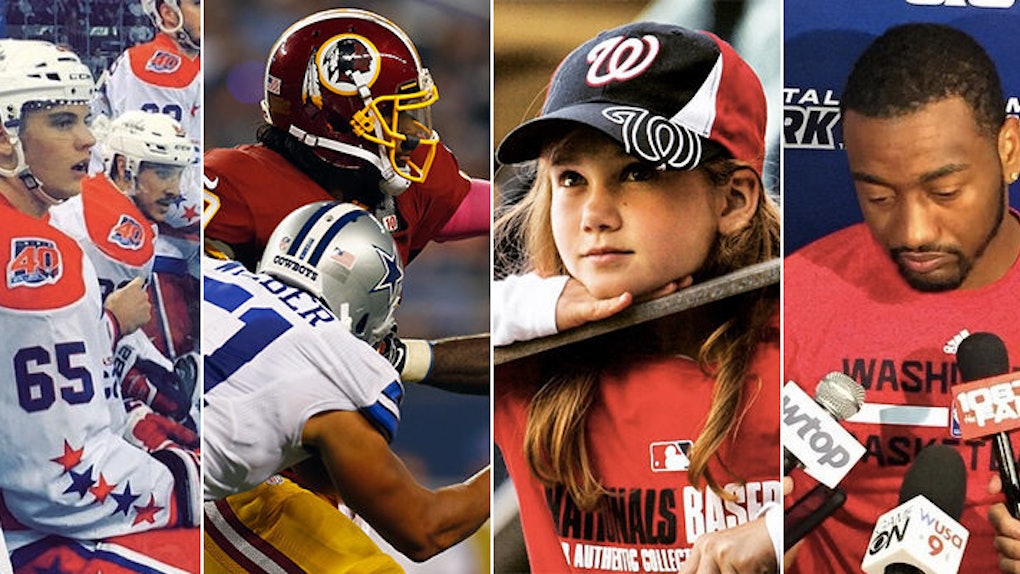 Why There's No Worse Place For Sports Fans Than Washington, DC

There comes a time in every sports fan's life when he or she thinks it's mandatory to root for the worst team in the world.

All teams let down their fans, disappoint them and, in some cases, fans may even believe their team is cursed.

This may be true, but there is no city that has it worse than Washington, DC. Being a sports fan in the nation's capital is like committing yourself to an abusive relationship.

It's a relationship where you are let down, year after year, yet somehow, for some ridiculous reason, you go back for more.

Last week, DC sports fans got a double dose of disappointment. On Friday, the Hawks eliminated the Wizards in their second round series of the NBA Playoffs.

Two nights before that, the other piece of the double-whammy came courtesy of the Washington Capitals. They fell in game seven of the second round of the Stanley Cup Finals to the New York Rangers.

They lost in overtime, in what was all-around a very close game. But, there's more to it: The Caps led this series 3-1 and were less than two minutes from winning the series in game five.

Forgivable? Sure, if it happens once or twice. But the Caps have a long history of — to put it politely — choking. The Capitals lost a playoff series after having won three games in a series at least 10 times.

They've only been in the league for 40 years. To add insult to injury, there is only one team, the Buffalo Sabres, that has been in the NHL longer than the Capitals and has not won a Stanley Cup.

Then, there are the Redskins. I could write an entire novel on the Redskins, but since it's not currently football season, let's stick to the highlights — or perhaps in this case, lowlights.

The team hasn't won a championship since the early 90s, and there has been so much drama with the team, coaches and quarterbacks, it's getting almost impossible to remember what having a winning team even feels like.

And, let's not forget about baseball. Baseball fans in DC have been tortured for decades, simply because the Senators left, and they did not have a team.

DC residents celebrated in the streets when the Montreal Expos announced they would make the move back to the nation's capital, but the team that became the Washington Nationals quickly learned the fine art of disappointing fans.

I was unlucky enough to be at that game five against the Cardinals two years ago when the Nats blew a huge early lead. In the top of the ninth inning, they needed just one more strike to win the series, and they just couldn't get it done.

The team then followed up that disappointment by being the best team in baseball last season, only to exit the playoffs after the first round.

Sure, I was an Orioles fan as a kid, but they didn't really provide much to cheer for either, aside from Cal Ripken, Jr.'s amazing Iron Man streak in the 90s.

Their last World Series Championship was the year I was born: 1983.

So, that makes me 32 years old, and I've never seen the Wizards win the NBA Championship or the Capitals win the Stanley Cup (although making it to the finals and going to a Stanley Cup Finals game in 1998 was a step in the right direction).

I've also been waiting my entire life to see one of the two baseball teams I root for win a World Series title.

If and when one of these things happens, I really hope it's worth the wait. I also hope that I'm not 90 when one of DC's sports teams decides to finally be the best.