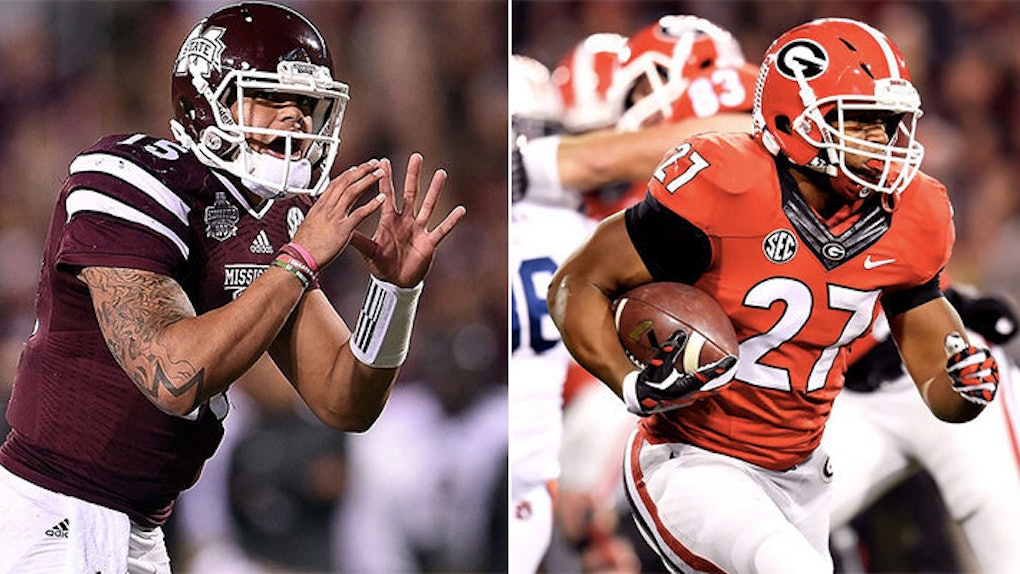 College football season is almost upon us, and I couldn't be happier.

Campuses will fill back up with students, and temperatures will slowly drop as teams vie for one of four available spots in the CFB Playoff.

There will be a changing of the guard atop the leaderboard of some conferences, while others will be dominated by the usual suspects.

No matter the year, though, there are always several unique story lines, individuals, teams and matchups that captivate the nation.

Here are three things unique to the 2015 season that will be worth tuning in for, even if you're the most casual of fans:

1. Baylor has behemoths you have to see to believe.

There are regular people; there are football players, and then there is Shawn Oakman and LaQuan McGowan.

Not only are they massive, but neither Oakman (6'9", 280 pounds) nor McGowan (6'7", 410 pounds) are listed as offensive lineman, the traditional landing spot for such large men.

Oakman had a breakout season last year as a defensive end with 11 sacks. His stature, production and hair, reminiscent of Dennis Rodman, have made him an Internet sensation.

Lining up across from him at Baylor practices is his counterpart, McGowan.

Originally an O-lineman, McGowan found success at the end of last season, and this fall, he will play as a mountainous tight end.

Baylor has since officially updated their online roster to list the big fella as such, and I am unbelievably excited to see what they do with him.

McGowan was listed as a co-starter on the team's post-spring depth chart, signifying he is a rather unique weapon. His hands are huge and soft, and he has clocked a 5.42 second 40-yard dash, which is faster than I can muster at 6'2", 185 pounds.

Whether Baylor is on offense or defense, they will be must-see team due to their hulking contributors on either side of the ball.

2. The lethal ground attacks of the SEC are the best in the country.

The SEC is absolutely loaded at the running back position this year.

Georgia sophomore Nick Chubb will start the season as the Heisman favorite after rushing for the fifth highest single-season total in the program's rich history, and doing so despite not starting five games.

Leonard Fournette, the former top overall recruit in the country, now has a year of experience under his belt down in Baton Rouge, after topping 1,000 yards on the ground as a freshman.

Fournette has continually drawn praise from his teammates and coaches for his workmanlike mentality as well as his physical abilities.

Alabama will hardly miss a beat, despite losing T.J. Yeldon to the NFL. Derrick Henry, who notably broke the national high school rushing record, returns as the thunder to the now-healed Kenyan Drake's lightning.

The much-improved Tennessee Volunteers will boast stable running options with the return of running back Jalen Hurd and the emergence of quarterback Joshua Dobbs.

Dobbs, who has gained national attention for his off-field endeavors, rushed for nearly 500 yards in just six games last season.

Mississippi State has its Tim Tebow-esque quarterback returning in Dak Prescott, who will likely be called on to serve as a rushing, battering ram with the departure of Josh Robinson.

Russell Hansbrough returns for Missouri after passing the 1,000-yard mark last season, and Ole Miss, Kentucky and Vanderbilt all return with their leading rushers from 2014.

3. The Big Ten's Eastern Division is stocked with quarterbacks.

The most notable quarterback name in the Big Ten East won't be taking any snaps.

Former gunslinger Jim Harbaugh takes over a Michigan team playing in, perhaps, the most difficult division in the country.

Christian Hackenberg experienced a bit of a sophomore slump last season, but he still led the Nittany Lions to a Pinstripe Bowl win in the program's first postseason appearance since the Jerry Sandusky scandal.

Hackenberg is a projected first-round pick in the 2016 NFL Draft, should he choose to leave early.

Joining Hackenberg atop most mock drafts is Michigan State's Connor Cook. Cook is my favorite pro prospect of this year's quarterbacks, and he surprised many by opting to return for his senior season.

He has prototypical size and a fluid release, and he will likely catalyze the Spartan's ascent to new heights, following a victory over Baylor in last year's Cotton Bowl.

And, of course, there is Ohio State. The Buckeyes' three-way quarterback competition recently became a two-horse race, with Braxton Miller's announcement that he will move into the H-back role, à la Percy Harvin during Urban Meyer's Florida years.

J.T. Barrett has more wins under his belt than Cardale Jones, but Jones' three victories came in the conference championship, the national semifinal and the national title game.

Jones' build and skill set also translate better to the professional level, and he, too, is a projected first-round pick.

I wouldn't be surprised if Ohio State's quarterback situation this season bares some resemblance to what we saw with John Calipari's Kentucky Wildcats on the hardwood this season.

Miller will, undoubtedly, take a few snaps each game in some sort of specially-designed Wildcat package, while Barrett and Jones have earned an opportunity to get theirs.