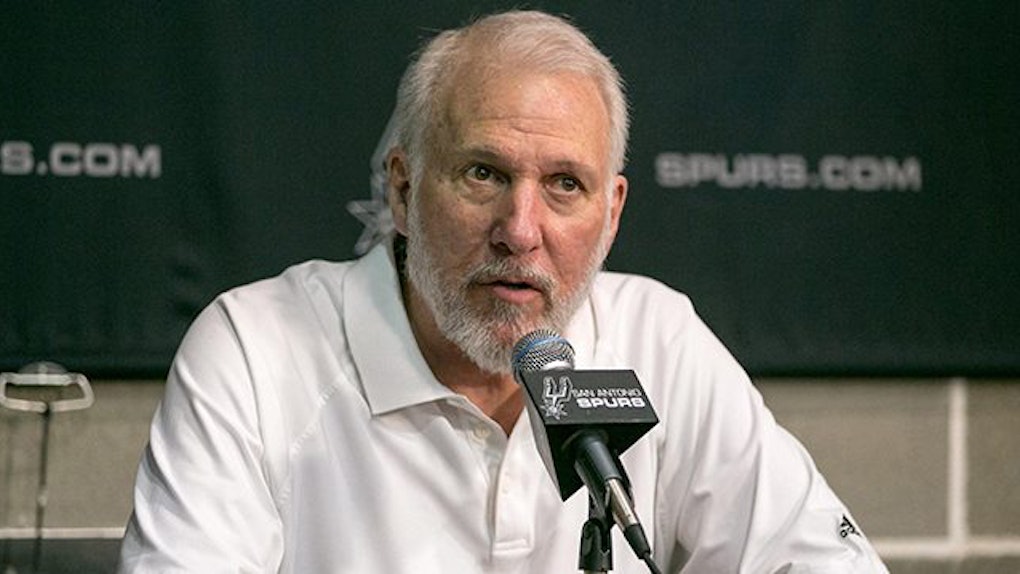 He was only talking to reporters for a couple of minutes, and yet Gregg Popovich found so many different ways to criticize President Trump.

I'd just feel better if someone who was in that position showed the maturity and psychological and emotional level of someone that was his age. It's dangerous, and it doesn't do us any good.

He called Trump a bully.

There was a young lady on today who said, 'I just wished he had gone up there and said something like, and, I know I said certain things, or you know I would really like to bring the people who don't feel, or I know some of you are scared.' But he can't do that because bullies don't do that.

Well, I think you know when the media reports what he says, I'm not sure why he can get angry about that. But it does boggle the mind how somebody can be so thin-skinned.

He explained why he doesn't respect Trump, yet.

It's hard to be respectful of someone when we all have kids and we're watching him be misogynistic and xenophobic and racist and make fun of handicapped people.

Just about the only compliment he had to give was reserved for the millions of people who joined groups of women's marches around the country on Saturday.

I felt great today watching the march, in protest to how he has conducted himself, because it tells me I really do live in a country where a lot of people care.

All of those quotes came in a single session with media members on Saturday night, before the Spurs game against the Cavs.

All of them prove something you might not have noticed: Gregg Popovich is already the best political commentator of the new year.

Why? Well, there's the notoriety he has, which comes with winning five championships, of course.

But just consider his demographics.

Popovich is a 67-year-old white male who's been working in Texas for over two decades. He's rich, has served in the Air Force and is a demonstrably grumpy man who doesn't mind making a fool of media members.

Based on his age, tax bracket and military experience alone, you could have guessed Popovich would have have voted for Trump.

If "the resistance" to Donald Trump's worst qualities really will be a thing over the next four years, it's going to need empathy from people like Gregg Popovich.

The fact that the actual Gregg Popovich is leading the way makes him one of the most important political commentators of the year so far.

Now, the fact that Pop doesn't support Trump isn't all that surprising if you watched his work in the NBA closely.

Popovich is also the same man who consistently recruits players from different countries and all-around a progressive mind in the league.

Still, as a voter, you wouldn't expect for that progressive mind to extend to politics.

And that's exactly why a voice like his is so valuable.