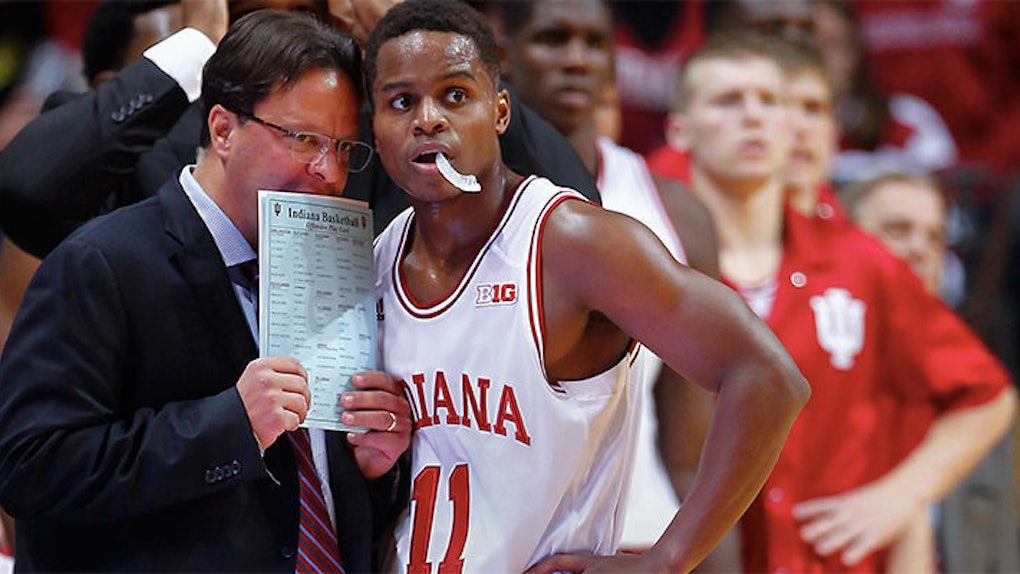 To say Tom Crean was on the hot seat this summer while entering the upcoming 2015-2016 season would be an understatement. Hell, a fan started a GoFundMe campaign in an attempt to raise the $7.5 million it would have cost to terminate Crean prior to July 1, 2016.

The tension coming from the enthusiastic, egotistical and desperate fan base could be felt 1,000 miles away here in New York, as the days leading up to the season went by. This Hoosiers team was ranked in the top 25 to start the season. Anything short of a competitive Big Ten conference record and — at a minimum — a Sweet 16 appearance would have been an utter disappointment.

Aside from the host school, Chaminade, the tournament is reserved for teams expected to have big years, or for schools that have been historically good in the past. That’s when the ceiling started caving in. The Hoosiers, favored to win the tournament, lost to Wake Forest (11-20 on the season and 14th in the ACC) and UNLV (18-15, sixth in the Mountain West). The fans and media started going berserk.

Things would get worse. Just a week later, the Hoosiers traveled to Cameron Indoor Stadium to play the Duke Blue Devils. The Hoosiers got run off the court — 94-74 — in a game that wasn’t as close as the final score indicated.

Fans jumped ship, and the local media was ripping Crean a new one. The once-promising season would probably end in a first round exit from the NCAA Tournament, or worse, an NIT appearance.

Interest from the borderline-crazy Hoosier faithful (myself included) had faded. Thanks to a forgiving schedule, the Hoosiers were able to somewhat right the ship. They won 12 straight games after the debacle at Duke.

Suddenly, the team became more confident and started winning road conference games to stay on top of the standings. Basketball fans didn’t buy into the hype of this team due to the presumed easy schedule.

The Hoosiers would change everyone’s perception. They beat four ranked teams in 24 days to win the Big Ten regular season title by two games. Just four months ago, the Hoosiers were left for dead on the side of the road. Now, they are one of the hottest teams in the country and are entering the Big Ten and NCAA tournaments.

Although basketball is just a game, there are some valuable takeaways that can be learned from the Hoosiers’ improbable run to a Big Ten Championship:

1. When things are going bad, you find out who’s really in your corner.

Everyone in the basketball world buried the Hoosiers and Coach Crean after the blowout loss to Duke. Alumni, fans and the local media had given up on this team. But, there was one person who stood behind Coach Crean and opted not to fire him: athletic director Fred Glass.

There will undoubtedly be tough times in your life. That’s when you know who’s in it with you through thick and thin. Maybe you lost a loved one, became ill or got laid off from a job. These are the low moments in people’s lives.

When this happens, you try to figure out who’s with you and who’s just along for the ride. If these “friends” are only around when you’re riding high, but are suddenly absent when things aren’t great, drop them immediately.

2. Adversity causes some people to break, and it causes others to break records.

Imagine walking into work on a Monday, knowing that 98 percent of the company wants you fired. There are a few people who like you and think you’re a valuable contributor, but most people can’t wait for you to make a mistake so they can pounce on you.

Now, imagine making a mistake. All of those people who want you fired have the ammo to pounce on you. That’s what Tom Crean went through. Everyone in the state of Indiana wanted him fired.

So, how did he respond? Tom Crean went on to win Big Ten coach of the year, and he led his team to a Big Ten regular season championship.

It would have been very easy for him to break. But rather than folding, he pushed through the turbulence and is now one of two coaches in Indiana University history to win two conference championships in four years outright.

3. Even in the darkest moments, you have to believe.

After the Maui Invitational (where Indiana lost two games), Tom Crean walked by several members of the media and confidently stated, “We’ll get this fixed.” Was this just coach talk?

Probably. No one outside the locker room believed it would get fixed, but it did.

When you surround yourself with people who are on the same mission as you and have the same goals in mind, wonderful things happen. When those people strongly believe they can accomplish the goal at hand, even in the darkest of times, that’s something special. Let’s be honest: Things often get very dark before they brighten up.

But when you firmly believe in something, wavering isn’t an option. You’ll eventually come out on top. That’s how championships are won.