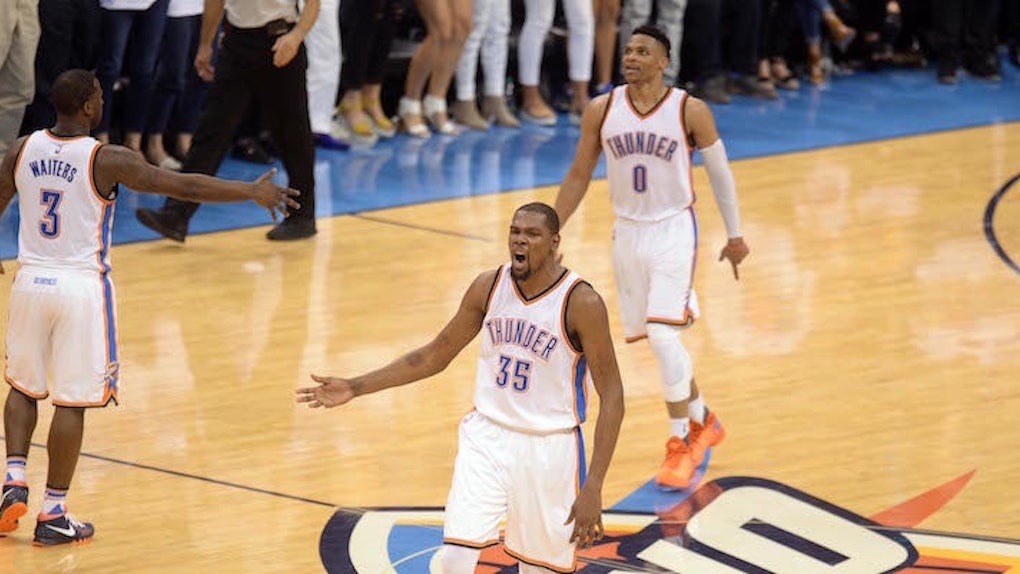 Did The Thunder Just End The Warriors Dynasty Before It Even Began?

Tuesday night was game four of the Western Conference Finals. The Oklahoma City Thunder beat the Golden State Warriors 118-94. They took a commanding 3-1 lead and are now one game away from ending the title hopes of the historic 73-win defending champion Warriors.

The MVP Of This Series

Westbrook has hands down been the best point guard in the series. He continued his dominance with a 36-point performance to go along with 11 assists and 11 rebounds. Not only has he outplayed the back-to-back MVP, Steph Curry, only two other players have posted more triple-doubles in the playoffs than Westbrook (Lebron James and Oscar Robertson each have eight).

Russell Westbrook plays with the intent to let you know he is the best on the court, and this series has shown that he's an MVP-caliber player.

Westbrook and Co. have surprised many with their performance, now looking like the best team in the world. OKC is playing like the team one would expect to hold the record for most wins in the regular season.

Their star players come to play every night with Kevin Durant and Westbrook leading the way as the top duo. Their bench is playing like the best second unit in the league. Their rookie head coach has made the best lineup adjustments (like starting Andre Roberson at three) and defensive schemes switching every man to Curry and physically having his team punish the point guard whenever they have an opportunity to.

This was expected from the Defending Champion Golden State Warriors, not OKC.

Draymond Green has played the worst basketball of his young career at the wrong time. He has the worst plus/minus for any player in the playoffs these past two games.

Stephen Curry may not be injured, but he is not the Curry that we have become used to watching. His shooting has been awful this series, and his defensive liability has been a big problem for his team.

Klay Thompson has done his job scoring and has been the main reason why these losses have not been by bigger margins. However, he hasn't been able to stay on the court to help facilitate the offense that's so deadly from their spacing and three-point shooting because of foul trouble.

Klay Thompson scored 19 straight points for the Warriors in a 6-minute stretch during the 3rd quarter pic.twitter.com/sIufW2KuJX — ESPN Stats & Info (@ESPNStatsInfo) May 25, 2016

The Warriors have been turning the ball over more than they've been passing and assisting. They also have been getting out rebounded and destroyed with points in the paint, all of which have benefited the Thunder and their lineup. Arguably the biggest problem is that their three-point shooting has been under 40 percent, which is a battle they need to win playing with their small ball lineup.

Can GSW Still Win Out?

Yes, the Warriors still have a shot. They are the one team that I believe has a realistic chance to come back to win a series being down 3-1. It has only happened nine times in history before, but the Warriors are known for beating the odds. They've beaten the Thunder before, and being defending champs, they have the experience to bounce back and get the wins needed to advance to the NBA Finals.

But will the Thunder will melt down and let them do it? I picked Golden State to win in seven before, and I'm sticking with that. We just need to see the team that was destined for a potential dynasty to come back to ball on Thursday.