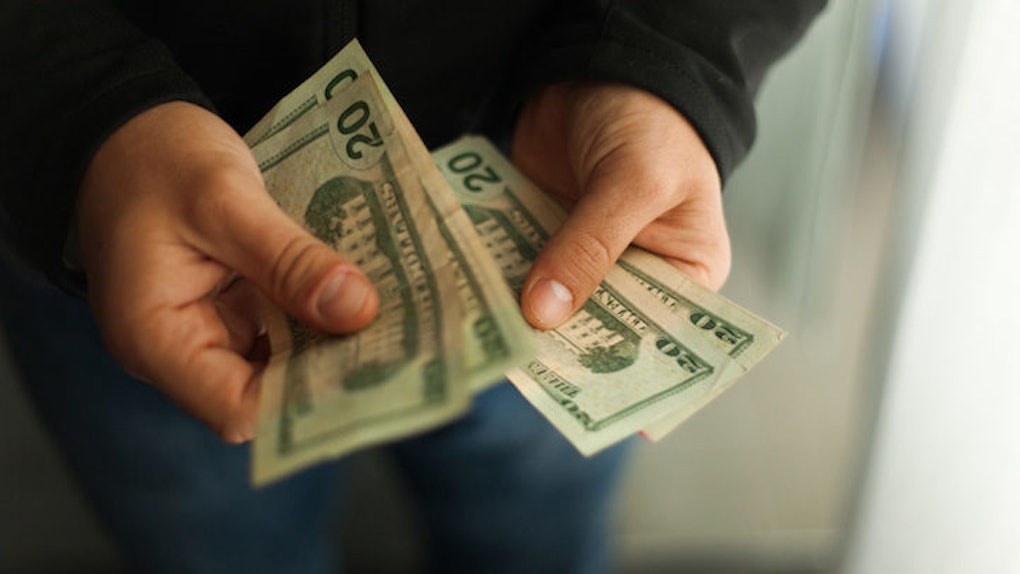 For many, Lady Gaga’s rendition of "The Star-Spangled Banner" was a sight -- err, sound? -- to behold.

It was a beautiful performance, really. Decked out in a patriotically-colored get-up, Gaga hit every single note with utmost brilliance. But to say every person watching from home or some packed bar took the time to appreciate his or her own country’s national anthem would simply be a lie.

I'm sure hundreds of thousands were brought to tears, but probably not for the reason you're thinking.

See, for many others, Lady Gaga’s rendition of our national anthem was an opportunity to make a quick buck.

In case you weren’t aware, there was actually a betting line available that allowed people to gamble on the duration of the national anthem. One popular betting site, Bovada, provided a line of two minutes and 20 seconds as the over/under for the anthem’s runtime.

#LadyGaga's National Anthem, from first note to the completion of the first 'brave', is settled officially at 2 minutes and 9 seconds. — Bovada Official (@BovadaLV) February 7, 2016

So, while some people took the time to enjoy the magnificent performance that Lady Gaga put on prior to the game even starting, others were sitting feverishly at the ends of their couches hoping she would shut the f*ck up already so that their “under bets” would hit.

Over the past two or three years, I’ve watched what’s supposed to be considered the biggest “sporting” event on our national calendar become the biggest illegal gambling event, among people who aren’t even fully cognizant of the game that’s being played.

Like, think about how many corporate offices -- full of white-collared, church-going, law-abiding citizens -- had some type of “football squares pool” for employees to indulge in for the big game; it’s truly remarkable.

For whatever reason, Super Bowl Sunday has become the unofficial day for people (who wouldn’t usually gamble) to bet on some of the most ridiculous things you could imagine.

I mean, come on, take a look at this list of possible prop bets, courtesy of SB Nation.

You could've bet on the color of Beyonce's halftime outfit. You could've bet on how many times they'd show John Elway throughout the game. You could've even took a stab at whether or not f*ckin' Mike Carey would be wrong when deliberating over a controversial call. (I thought the line should've been much more in favor of him being wrong).

The majority of these prop bets don't even deal with the game -- or sports, in general, for that matter.

See, linesmakers -- the people who devise these odds -- don't create them with any firm intention of providing sports fans with creative ways to enjoy the game; they exist for the sole purpose of making money (and taking yours, in the process).

According to James F. Peltz of the LA Times, citing a casino trade group called the American Gaming Association that released betting estimates a week prior to yesterday's game, "Add it up, and Americans will spend at least $4.2 billion betting on the Super Bowl this year."

Do you realize how much money 4.2 BILLION dollars is? It's about the equivalent of the entire nation of Togo's GDP. Think about that. The amount of money that Americans were carelessly tossing up last night was almost the same amount as an entire country's total economic activity...on, like, some really f*ckin' pointless bets.

And I understand -- for most -- it's a once-a-year type thing, but with all the attention being given to the legality of things like daily fantasy sports, where do we draw the line between good fun and breaking the law?

Personally, I would NEVER gamble money. (Hear that NSA?). Sure, I enjoy perusing the sportsbook and trying to pick winners (for the love of the game), but we all need to remember that betting -- in this country -- is still illegal.

If we're going to reign down on the person who surpasses the speed limit by five mph because of an emergency, it seems a bit unfair that we look the other way with regard to betting, especially when we know the large-scale amount of it will inevitably occur on Super Bowl Sunday.

If we're fully aware that it's happening -- and are choosing to withhold any type of repercussions for it -- we should be mature enough to acknowledge the idea of betting in a formal sense and legalize it like many other countries in the world.

Hell, on Saturday mornings, I see the official Twitter handles of various Premier League clubs posting direct links to bet on a club through platforms like BET365 or William Hill. Betting really isn't the most immoral thing imaginable, but by picking and choosing where we want to enforce our own laws, it becomes an issue of fairness and consistency.

If we're going to continue to allow mass amounts of betting whenever we find it convenient, we should face the issue head on and decide definitively -- as a country -- how we feel on the subject.

And, given the 4.2 BILLION American dollars that were in circulation last night, I think our answer would be pretty clear. In fact, I'd bet the house on it.