Let's get one thing out of the way: I'm not one of those guys who thinks it's blasphemous to compare Steph Curry to Michael Jordan.

There's no sense in ignoring very logical arguments just because MJ was always presented to us as the mythical MJ.

And make no mistake about it, there are actual, legitimate grounds on which you can compare MJ and Steph. In the spirit of fair, measured and analytical thinking, we have to acknowledge these arguments.

So, don't get me wrong, I'll readily acknowledge how similar their numbers look at the All-Star break.

And I'll happily acknowledge all the advanced metrics Curry met that Michael Jordan did not (they exist, trust me).

And any other info your best ESPN and SI writers bring to the table, I'll read that, too.

Perhaps even more importantly, I'm willing to acknowledge how unfair some people are to Steph Curry and the Warriors in general (as it pertains to how they stack up against Jordan's Bulls).

A lot of people don't want to hear the argument Steph and Golden State could be better because the way they play doesn't fit the paradigm of how basketball is "supposed" to work.

A lot of people, it seems, have not yet fully wrapped their heads around how Steph and the Warriors are dominating the NBA with this brand of basketball.

So, it's no wonder they're not ready to even consider the Warriors vs. Bulls -- or Curry vs. Jordan -- argument, even though the comparisons are there to be made. 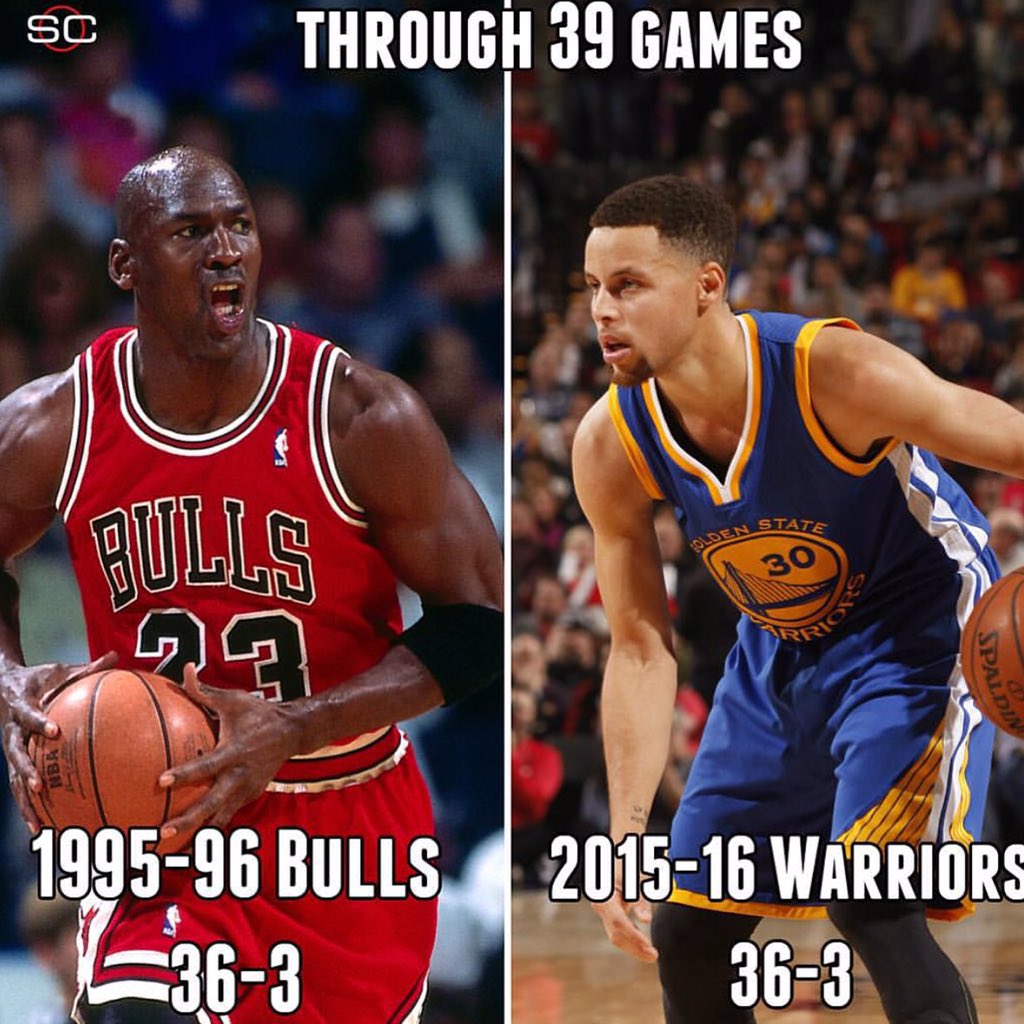 Among all the low-hanging fruit I could pick at, let me lay out the simplest of "faxx" for the kids out there who think otherwise.

Can Steph win at least one NBA Finals MVP before we compare him to the greatest ever?

I mean, seriously, I'm not someone who reduces these debates to trophies (it's part of the reason I hated those "Why is Kobe better than LeBron? Three rings" arguments in high school).

Still, Steph is going to have to do way better than last year before I'm ready to compare him to Jordan.

Why? Because you can't have the best GM in the game (NBA Executive of the Year Bob Myers), the best defender (Draymond Green), the best bench and the best coach and still find a way to allow Matthew Dellavedova to outperform you for significant stretches of the series.

You also can't be compared to Jordan if you couldn't find a way to win the Finals MVP Award against a Cavaliers team that essentially played with a seven-man rotation, with the seventh man being James Jones (so six, if we're being real).

The Warriors absolutely did get lucky.

I'm not even trying to be a hater on this, trust me. I readily admit this year's (and last year's, to be honest) Golden State Warriors are the greatest team I've ever seen in my life.

But they're also a funny case in that they had the most luck of any team I've seen in my life, specifically with how the road to the championship trophy was laid out for them.

Literally every single starting point guard who could have made Steph Curry's life harder on the defensive end was injured during the playoffs. For those keeping track at home, that's the Pelicans' Jrue Holiday, who played hurt during the first round, the Grizzlies' Mike Conley Jr and the Rockets' Patrick Beverley.

And we haven't even gotten to the question of what would've happened if Kevin Love and Kyrie Irving weren't injured during the Finals.

Jordan is number one in the proverbial history books. OK, cool. But that doesn't mean it's impossible for anyone to overtake him. All I'm saying is I'd like to see said contender play his best when it matters most.

Steph hasn't done that -- yet.