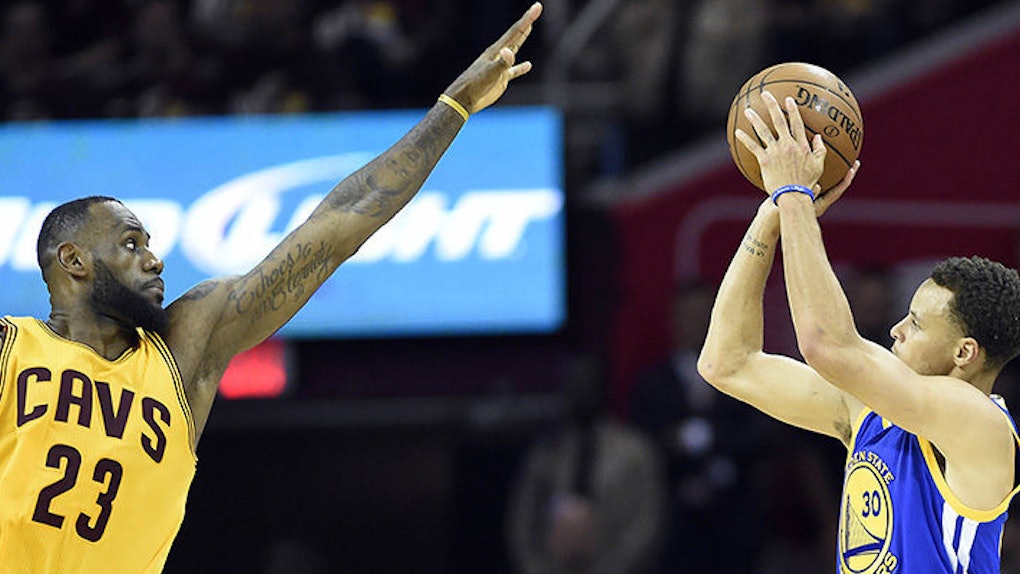 Steph Curry And LeBron James Are More Alike Than You Think

It's hard to think of anyone who has taken the sports world by storm more than Steph Curry.

The Golden State Warriors' guard has left fans in awe with his seemingly impossible shots, slick ball handling and clever showmanship on the court.

With of all of his success, it seems as though “Chef” Curry has taken the throne as the face of the NBA away from the league's supervillain, LeBron James. However, when you look at the tale of the tape, are they really all that different?

A big part of Steph's rise to fame is due to his seemingly perfect home life. He and his wife Ayesha, once high school sweethearts, have two adorable children, including the now famous Riley.

The family is often seen on both Steph and Ayesha's Instagram pages enjoying picturesque family fun. Curry and his family have been positioned as this fresh outlook on the league, where the NBA's biggest star is a loving family man. But wait, haven't we all seen this before?

While they don't garner nearly as much attention in that particular respect, LeBron James and his wife Savannah, also high school sweethearts, have their own loving family at home.

A father of two boys and a girl, James has been a family man for over 10 years. However, due to a relative lack of social media exposure, this often gets forgotten.

Of course, Steph's success on the court is the leading factor in his rise to this fame.

His record-breaking play resulted in back-to-back NBA MVP awards, with his most recent won via unanimous decision, a first in NBA history.

Two MVP honors are nice, but four is better, which is how many Curry's NBA Finals rival James has won. If you're a fan of the game, you know James could probably win this award every year, however, he has become a victim of his own greatness.

Legendary seasons are expected from LeBron and because of that he's often taken for granted.

Fans often also pose the argument about the difference in the two's personalities. Curry has become positioned as this quiet, humble player whereas James often gets pegged as a boastful egomaniac.

But neither, in fact, is true.

Take a look at the highlights throughout the season. Curry isn't one to hesitate when it comes to celebrating his achievements on the court, often cutting up a dance or unleashing his now famous shimmy.

Sure, LeBron might let out a roar or pound his chest after an emphatic dunk, but it's no different than his cross-court rival.

But, there is indeed a difference between the two that probably ignites this notion of a large disparity in their respective paths to the NBA. Undersized with still raw talent, Curry was overlooked by the big-time colleges as a high school player. The best he got was an offer from Davidson College, where he would eventually shine for three years.

For James, he was hailed as the "chosen one" from the age of 17. After getting drafted number one overall to his hometown team, the Cleveland Cavaliers, the spotlight has been fixated on him for over a decade and shows no signs of letting up.

Some fans of the NBA have seemingly presented this matchup as a battle of good and evil between Curry and James, respectively, where Steph is everything LeBron is not.

Instead of trying to rationalize this wildly inaccurate debate, fans should instead appreciate the greatness of both players. The two together have done wonders for the league, making NBA basketball can't-miss action.

Sunday night will be a marquee matchup of the league's two best players from the two best teams, not a coronation of one or dethronement of the other. Both men are role models, on and off the court, and should be acknowledged as such.

So, stop trying to expound on these “differences” between Steph and LeBron; they're more similar than you'd think.