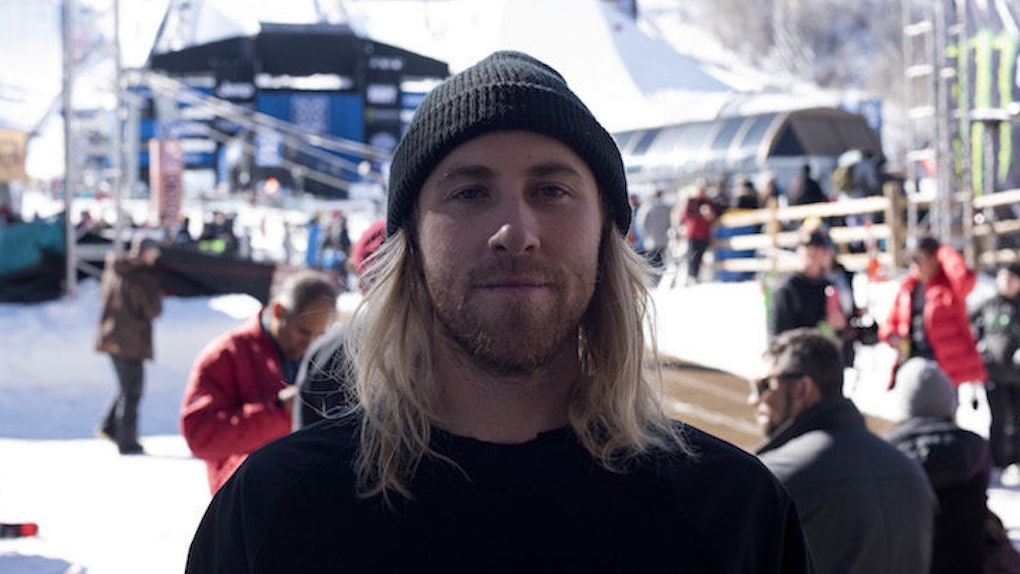 Is Sage Kotsenburg The Nicest Athlete At The X Games?

Not to be handing out superlatives like they're prizes, but if there were an X Games competition for "nicest athlete," Sage Kotsenburg would for sure take home gold.

The man who took home the first Olympic gold medal in men's snowboard Slopestyle would have every right to have a big head and a huge ego, but after meeting him in person, Elite Daily can personally attest Sage is just about as chill as they come.

He even let us go way over time on our interview. Instead of just answering five simple questions, he stuck around for a full 14 questions.

Check out his insights into the future of snowboarding, his favorite part of X Games, learn about his guilty pleasures and what makes this incredible athlete tick.

What's been your favorite part of X Games so far?

It's just day two here at X Games, but it's just been fun; we've had practice the whole last 4 to 5 days. It's been hard, I haven't done a Slopestyle contest here since last year. I've been filming a lot lately. The first two days were, I wouldn't say brutal, but it took me a while to get kind of into the groove of putting a whole run together. Yeah, everything clicked pretty well the last two days. I'm excited. I'm excited for tomorrow; I think it's supposed to snow, but it's nature, I'm a snowboarder, so you gotta get used to the snow. But X Games has been rad so far.

How did you get into snowboarding?

I got into snowboarding just through my brother. I skied for a year when I was 4 to 5, and then my brother hated skiing, I don't know why, just hated skiing, claimed he almost broke his legs because his legs got twisted and that was the reason he had to snowboard, so he started snowboarding and I obviously had to go snowboarding too since my brother was doing it. Yeah I got hooked right away. I was not naturally talented at all. For my brother, it clicked instantly, and me it took a year before I could even do anything close to getting down the run. It was fun though, something challenging. I think that's why I like it so much.

What are your hobbies outside of snowboarding?

Mostly outside of snowboarding I skate and surf a lot. I mountain bike a little bit, hike, just try to stay outdoors as much as I can, especially in the summer, you know because winter I am just snowboarding the whole time and summer I don't want to be locked up inside so I just do pretty much anything outside.

How do you balance snowboarding and your personal life?

It's hard to take breaks sometimes from snowboarding, but you have to. It's like any sport, if you just keep doing it every day 100 percent you're going to get burned out or injured, so I try to take breaks and just hang out being Sage, not being a snowboarder, just be a kid again or a guy again. In the end, it's always better to take some breaks than burn yourself out.

Where do you think snowboarding is heading?

Snowboarding, it's the general economy for winter sports right now. A lot of bad winters, like snowboard and ski economy is not the best right now but, you know, we are getting snow this year which is nice. It's made a lot of contests disappear and just with technology nowadays, everything is online so content is huge. That's what I've been working on a bunch is doing movies, edits, webisodes, trying to appeal to everyone online. It's pretty key to do that. Also doing some contests so, I'd say snowboarding is heading to be content based, but contests will still be 'who's the best that day?' This week you're going to see some crazy stuff in snowboarding. That's all rad, that's all good stuff. I'd say it's moving in a good direction.

What's an interesting fact nobody knows about you?

I'm always so bad at these ones. I'm afraid of heights when I'm not snowboarding. I'll be hitting a cliff or something, 30, 40-foot cliff, I can't even stand on the edge of it, but I'll stop in and throw a 720 or something. I think a lot of people are like that, too.

Favorite song right now, and what do you listen to when you go out on Slopestyle?

Favorite song right now probably “New Level” by A$AP Ferg and Future. We were just in Japan; we were filming in Japan and it was like our theme song. Usually when I'm competing I listen to a lot of rock, a lot of old school stuff, it depends on the mood but I love rocking out to the Stones, if I'm trying to mellow, Simon & Garfunkel, Bob Dylan, it kind of gets you in this melody mood. I usually don't listen to rap when I'm snowboarding but I do like rap a lot.

Last photo you took on your phone?

Let's see... I took a photo of my friend sleeping in the car.

Neither, I got a girlfriend so I don't need that stuff.

If you could have one superpower, what would it be?

It sounds so lame and [cliched] but it would be so sick to fly. It's gotta be the sickest thing.

If you could meet any famous person who would it be?

I would love to meet James Franco, or Seth Rogen. They gotta be so sick. They seem so cool.

What do you look forward to most at Winter X Games?

I look forward to my runs the most, but also I like watching all the other events. One thing that was really rad that I got to do this year was we got to shred with the Special Olympics people. That was so cool man, that just brightens your whole life up. All those guys and girls are so happy to be out there and they were shredding by the way. i think some of them had better times than the pros. It was really cool to be around them. It just puts you in a good mood. You're just happy to be alive. Kind of realize how much you take for granted every day and it just brings you back.