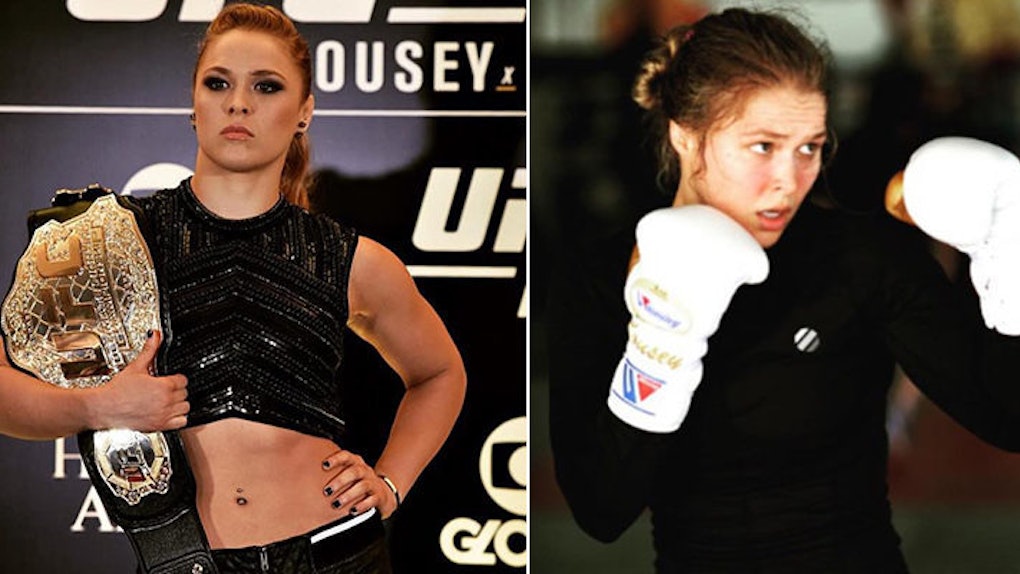 The Real Fight: How Ronda Rousey Is An Inspiration To All Girls

In today's media trap of telling young girls they're not skinny enough, UFC Champion Ronda Rousey is the type of idol the modern female needs.

This badass 28-year-old recently was awarded the 2015 Best Fighter ESPY, earning yet another title to her impressive trophy shelf.

She's a master of mixed martial arts (judo being her main discipline), and is taking the UFC world by storm with her tough girl attitude.

But not only is she a bombshell fighter about to defend her title at the UFC 190, she's also determined to use her fame to win another battle: the fight against eating disorders.

Rousey revealed she once suffered from bulimia, and for years, she would hide it from her friends and family. Eventually, and with help from an ex-boyfriend, the fighter was able to overcome her secret struggles.

One of the biggest reasons she ended her bulimic ways, as Rousey explained, is her fighting and desire to be an inspiration to other female athletes. She credits the way UFC fighting made her feel both strong and happy as the key to what got her out of her dark times.

After coming out of her dark years, Rousey got back to the gym and back to work. She admits she always had body issues, but learned to embrace her body instead of hating it.

"If people, like, say that my body looks masculine… I'm just like, listen, just because my body was developed for a purpose other than f*cking millionaires, doesn't mean it's masculine. "I think it's femininely badass as f*ck because there's not a single muscle in my body that isn't for a purpose because I'm not a do-nothing bitch."

She also opened up to Cosmpolitan recently after doing a shoot with them about her relationship with her body throughout the years:

"I grew up as an athlete doing judo, so I didn't really have a conventional, feminine body type. I grew up thinking that because my body type was uncommon [i.e., athletic], it was a bad thing. "Now that I'm older, I've really begun to realize that I'm really proud that my body has developed for a purpose and not just to be looked at."

Rousey now knows the importance of loving one's body and feeding it properly. She wants to be a role model for all young athletes, and anyone who has ever suffered from an eating disorder.

In an era of little girls being told to be princesses who need saving, Rousey is showing them they can be their own warriors and they don't ever need to be a certain weight to be beautiful.

Rousey is an advocate for women of all ages eating healthy, working out and loving all their bodies, regardless of size.

When she isn't in the ring or being featured in movies such as "Furious 7," she can often be seen at charity events.

Most recently, Rousey donated time and $5,000 to help a great cause called “Don't Throw Up, Throw Down,” openly one of her favorite charity events. The event was a two-hour training clinic, and Rousey was more than happy to help.

Rousey is on a mission to show everyone who suffers from eating disorders they can overcome it. She prides herself on living by example for her fans, and every young girl who is watching her redefine what it means to fight "like a girl."

As a fighter both in her career and personal life, Rousey has learned that she can conquer any obstacle and wants her fans to know the same.

Ronda Rousey is the type of role model everyone can support.

With her next fight is this weekend, Rousey will never stop fighting both in and out of the octagon. To her, the titles are nice, but she's on a mission to show everyone just how tough girls can be.