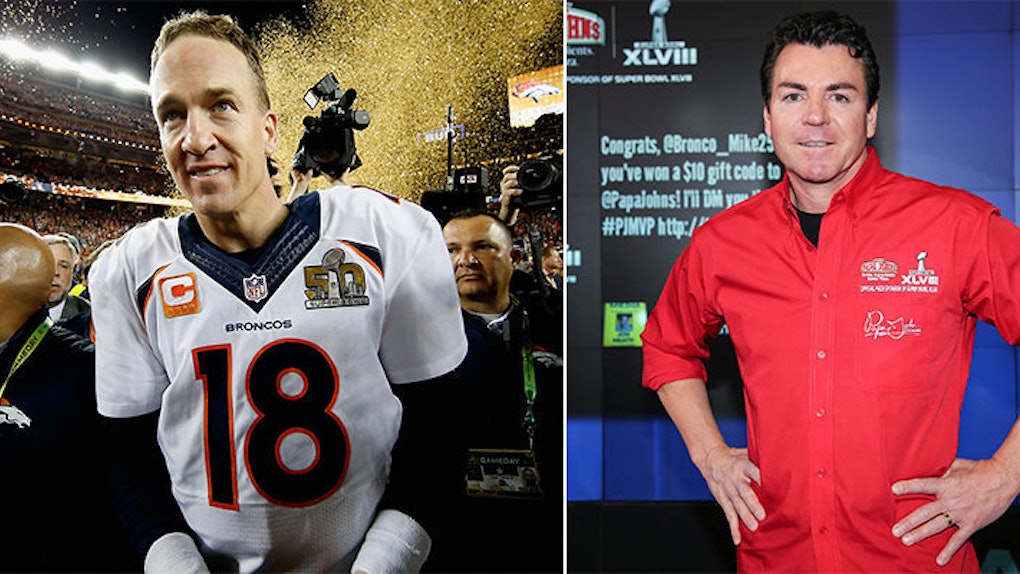 What The F*ck Is Really Up With Peyton Manning And Papa John?

I figured it wasn't worth it since every sane person on the planet thought Peyton Manning was going to ride off into the sunset after winning a second Super Bowl, but now, it appears otherwise.

According to various reports this week, 39-year-old Peyton Manning is seriously considering coming back for yet another NFL season.

This is a mistake for multiple reasons. Manning's health and on-field performance being at the top of the list, but also because another year of Peyton Manning in the NFL undoubtedly means another year of Papa John's pizza being jammed down our throats.

Not literally (not yet, anyway), but you know what I mean. How many more commercials are these guys going to produce? How many more awkward embraces are they going to share?

It needs to stop, yes, but perhaps more importantly, we need to know how it started.

We need to lift the lid on this unholy relationship between Peyton, Papa and pizza. We need to know what the f*ck is really up with Peyton Manning and Papa John Schnatter.

It appears Papa has been in Peyton's financial house since 2012 when Manning reportedly bought 21 Papa John's pizza stores in and around Denver.

Initially, though, Papa John and Peyton Manning crossed paths a year earlier, when they worked together on a Super Bowl promotion.

Soon after that, the commercials started invading living rooms across America.

What's more annoying, as ESPN pointed out, is it's unclear whether or not Manning actually put up any dough to purchase those 21 Papa John's stores in 2012 because he's also a paid spokesperson for the pizza chain.

I'm sure these kinds of sponsorship deals go down all the time, but few seem as public (read: in your face) as Peyton Manning's deal with Papa John's.

In 2014, it was reported sales at all of Manning's Papa John's locations were booming, thanks in large part to the passing of Colorado Amendment 64, the state's legalization of marijuana.

This also led to the creation of at least four new Peyton Manning-owned Papa John's restaurants in the Denver area.

Speaking on the spike in sales, Manning reportedly said,

There's some different laws out here in Colorado. Pizza business is pretty good out here, believe it or not, due to some recent law changes.

So, at least partially, you can blame the state of Colorado for the expedient growth of Peyton Manning and Papa John's relationship.

Based on the strength and value of their partnership, it should come as little to no surprise John Schnatter vehemently supported Peyton when the five-time league MVP was accused of using HGH late last year.

Nationwide and DirecTV, two of Manning's other corporate partners, didn't appear as willing to give the Broncos quarterback their blind support.

Let's hold up a minute.

If you're reading this article, thinking this is one dude making a mountain out of a molehill, picking on one corporate partnership in a world dominated by such agreements, well, consider this:

Peyton appearing on television with Papa John too many times a year is really just the tip of the iceberg. Peyton and Papa are so annoyingly intertwined, Peyton's Broncos teammates call him Papa John and ask for free pizza during victory speeches.

And, who could forget the most recent, egregious instance of Manning and Schnatter's unbridled affection, when the two kissed almost immediately after the Broncos clinched a win in Super Bowl 50?

Manning reportedly said he hadn't even kissed his wife yet before gently brushing cheeks with the CEO of Papa John's International.

What the f*ck is really up with Peyton Manning and Papa John? I don't know. I don't know if we'll ever know. But, I know it's wrong.

And if Peyton Manning, against the better judgment of anyone with eyes, decides to come back for an 18th NFL season, prepare yourself for another round of awkward, uncomfortable moments and ads... but probably not better pizza.