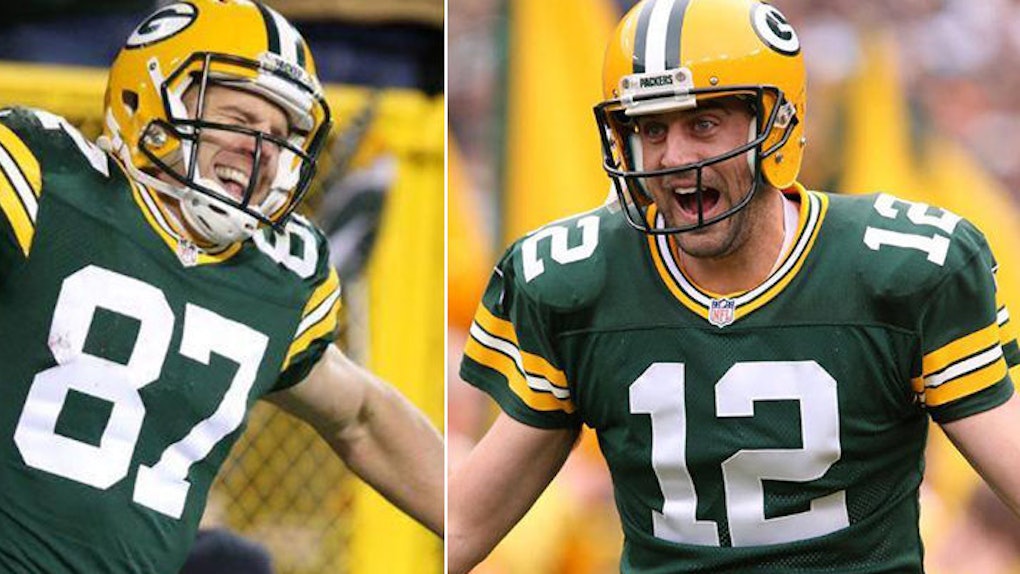 If there’s one thing the Green Bay Packers do well, it’s player development.

Aside from a typically brilliant draft strategy, Green Bay is known for their ability to turn good players into top NFL stars, especially when it comes to the offensive side of the ball.

In the 2014 season, Packer’s WR Randall Cobb boasted a career-high 91 catches for over 1,200 yards and 12 touchdowns. This came just before re-signing with Green Bay for a four-year, $40 million contract this year.

Now, put Cobb next to one of the league’s top receivers, Jordy Nelson, and you’ve got a duo designed to win championships. Nelson ended the 2014 season with just over 1,500 yards for a total of 98 catches and 13 touchdowns. Total domination.

The reason I mention Cobb first is because Nelson is coming off an offseason hip surgery that could have an impact on his 2015 performance.

Although Nelson has been quoted several times post-surgery that he’s ready to go, those types of injuries shouldn't be taken lightly.

Aside from the obvious, the Packers have an offensive core stacked with top talent. Take second-year WR, Davante Adams. Coach Mike McCarthy said Adams is a star receiver, and he even called him the offseason MVP

Adams is the perfect match as a short- to mid-range receiver for the Pack.

It was looking like he was already well on his way to gaining the trust of Green Bay’s king, Aaron Rodgers, in his 2014 rookie season.

With 38 passes for 446 yards and three touchdowns, Adams' numbers are nothing short of impressive for being GB’s third WR.

Most impressively, Adams' biggest threat comes in his post-catch abilities. At 6’1" and 225 pounds, his size, speed and overall athleticism could potentially make him one of the league’s top receivers in a few short years.

Although spread a little thin at the TE position, Quarless and Rodgers were both important components in Green Bay’s supreme 2014 season. Rodgers was most famous for his key touchdown in their playoff win against the Dallas Cowboys.

In addition, Quarless was targeted only 2.8 times per game last year, but he managed to rack up 33 receptions for 354 yards and four touchdowns.

Another great thing about the Pack is the obvious on-field chemistry, which is one of the most important components of an exceptional team.

As an organization that is notorious for keeping players around for the long haul, McCarthy and company know how to build team strength through consistency.

In 2014, the Packers had the same starting offensive lineman for 17 of 18 games.

Being able to work seamlessly as a unit was one of the biggest reasons Green Bay dominated last year, allowing only 30 sacks (the lowest since 2007).

Protecting the team’s golden child is the most essential element to winning games in Green Bay, and fortunately for Rodgers, the biggest players in his O-line will be returning for the upcoming season.

The blend of veteran and young offensive-line talent makes it hard to point to another team equally as lethal as Green Bay.

Bryan Bulaga, the 2010 first-round pick, resigned as a free agent back in March and has been a top right tackle throughout his career. Likewise, right guard TJ Lang and left guard Josh Sitton were both ranked number two for their positions for last season.

Another beautiful addition to Green Bay came in 61st overall pick in 2013, Eddie Lacy. A quick look at the team’s third-year running back shows he’s exactly what the doctor ordered for a notoriously weak run game.

Lacy has proven his star status by accruing over 2,300 yards and 24 touchdowns. So, there’s that.

Now it’s time to talk about the real deal, the king of kings, the guy who could quite possibly be an embodiment of God himself, Aaron Rodgers. All of this build up around an exquisitely talented offense would be worth nothing, unless it was led by the great Mr. Rodgers.

Arguably one of the greatest quarterbacks of all time, Rodgers' elite status is a result of his impeccable accuracy and perfect consistency.

He ranked seventh overall in total passing yards (4,381) and was first for starting QBs in touchdown-to-interception rate. Rodgers' arm speaks for itself, so there's no use in writing about it anymore here.

It’s obvious Packers General Manager Ted Thompson knows what he’s doing when it comes to drafting and developing his offense.

The breadth of talent and exquisite coaching could make for one of the best offensive teams not only Green Bay, but also the entire league, has seen in years.

Barring any significant injuries, the Packers should be able to maintain and improve upon their place on top in 2015.