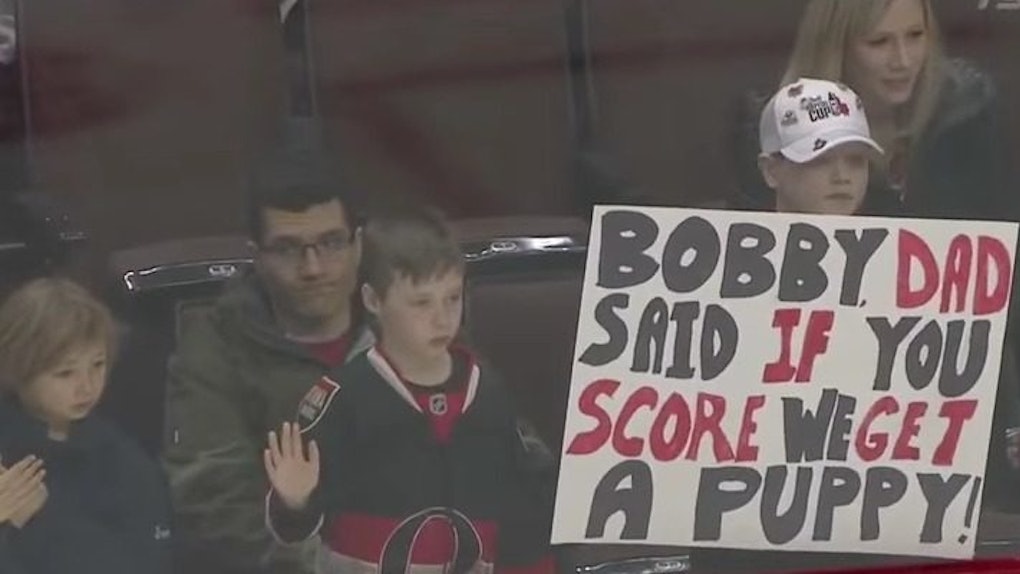 One Ottawa dad made a huge mistake betting against Bobby Ryan during the Senators' game against the New York Rangers last night.

Ryan is one of the National Hockey League's most prolific scorers, so promising your sons a puppy if he scores is probably not the best idea.

Before the game started, the two boys held up a sign advertising their dad's silly wager.

And, sure enough, Bobby Ryan netted his 17th goal of the season with time winding down in the second period.

Apparently, Ryan saw the sign during Ottawa's pregame skate and felt pressure to win the kids a puppy.

Bobby Ryan said he felt more pressure to get the family a puppy than he did for calling out his teammates. — Wayne Scanlan (@HockeyScanner) January 24, 2016

According to another fan in attendance, the dad was not very happy with Bobby Ryan's heroics.

The kids who now get a puppy because Bobby Ryan scored are sitting two rows in front of me and their dad does not look impressed #NYRvsOTT — Cory Morrell (@CoryMorrell) January 24, 2016

Was there ever any doubt the kids were going to name that puppy Bobby?

The Senators won the game 3-0, and these two young boys are definitely Bobby Ryan fans for life.

Citations: These Two Young Hockey Fans Got A Puppy Thanks To A Goal From Bobby Ryan (UPROXX)