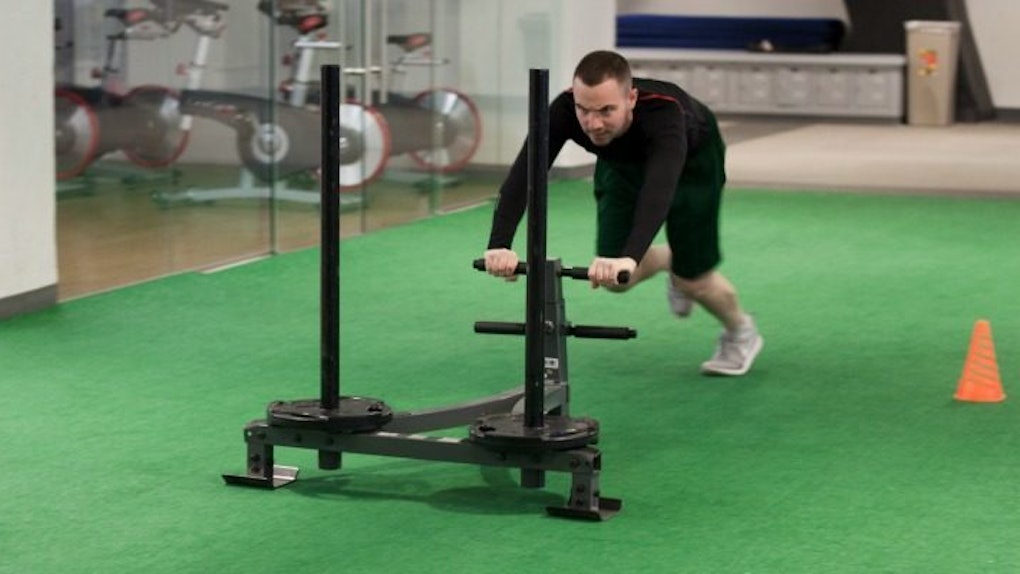 When I first walked into the Training Camp Performance Center on Manhattan's West Side, I didn't know what to expect. From Athos' initial email invite, I knew I'd be participating in an "editor Mini Combine Training session," whatever the hell that meant.

When you see the words "Combine Training," you think NFL, but this 26-year-old, 5-foot-9 white guy has no intention of turning pro anytime soon.

Don't worry, I also had no idea what that meant until I suited up and got to chatting with Jake Waxenberg, Athos' Director of Brand Strategy, and Gabe Rangel, Athos' Manager of Athletic Performance.

Before I embarked on my training session -- read: maybe the hardest thing I've ever done in my life -- with Rangel, Waxenberg went into detail about the science of Athos' high-tech training gear, saying,

We make training apparel to keep you cool and dry while you work out, similar to the other products available on the market. The difference is we have sensors that are directly built into the clothes that can track your muscle effort and activity. These sensors automatically follow the correct muscles we set it to track.

The way this all works is the sensor reads the electrical signal your muscles naturally produce when they exert force. That's called EMG, or electromyography. It sends that signal that the sensor picks up in the core, which is the brains of the system. That's the little hardware piece that clips into the center of the chest and the side of your leg. That core understands the signals the sensors pick up, just from interpretation. And then it sends [that data] via Bluetooth to your iPad, iPhone or iPod, where you see your muscle connectivity in real-time and with replay with different colors that light up different muscles.

Now that I had a basic understanding of Athos, the company's technology and its goal in working with NFL vets, pro athletes and everyone else, it was time to put my trust in Gabe Rangel and get to work.

First, Rangel made sure the two small pieces of hardware Waxenberg mentioned were on, working and giving an accurate reading to the program on his iPod. He did this by having me warm up on a stationary bike to get my heart rate moving and the blood pumping.

Immediately, the application on Rangel's iPod started lighting up as the different parts of my body went to work.

After I warmed up on the bike, Rangel had me do a series of stretches to test my range of motion, work my glutes and see if I was using the left and right side of my body in proper proportion.

With each move and each rep, I continued to see the app come alight with blue and orange as I worked the various muscle groups in my body. After each drill, Rangel gave me a specific percentage for each muscle I was using and was able to tell me whether I was left or right dominant depending on the activity.

After that, it was time for a series of planks and agility drills, both of which made me seriously reconsider my decision to leave the office about an hour and a half earlier.

With every rep I completed, though, I felt stronger. And seeing the pin-point analysis and data in front of me gave me tangible goals to reach for with each new set.

As painful as it is for me to recount, the hard work was really just beginning. Seriously, draft prospects and NFL superstars, I have no idea how you do it, regardless of how big, strong and quick you are.

But anyway, back to me. Now, it was time for me to work my shoulders by writing the alphabet in the air with a weight while keeping my arm perfectly straight. After we ran that a few times, Rangel put me through a drill designed to increase first-step explosiveness. I felt like exploding by the time it was over.

Last, but most certainly not least, came the hardest drill of the day. I was already feeling like a hot shower and a nap were necessary in my immediate future, but after completing two sets of sled suicides, I was straight up ready to die. Forget the shower, nap and meal, I'll just pass out over here in the corner.

Suicides, as in: Drive the sled to the first of three cones, run to the front of said sled and drive it back. Repeat until you hit all three cones. Twice.

Seriously. I'm not drumming this up for effect. You know the NFL is tough just by watching every Sunday, but pushing myself past my limits in this drill alone gave me a newfound appreciation for what NFL hopefuls have to go through just for a chance to make it to the big show.

I could barely see straight by the end of this "editor Mini Combine Training session," but looking back on it, the experience was more than worth it.

Athos is developing relatively affordable products to help everyone from NFL players to average Joes get the most out of their training and performances. I'm glad I could be a part of the next wave of work-out wonder.