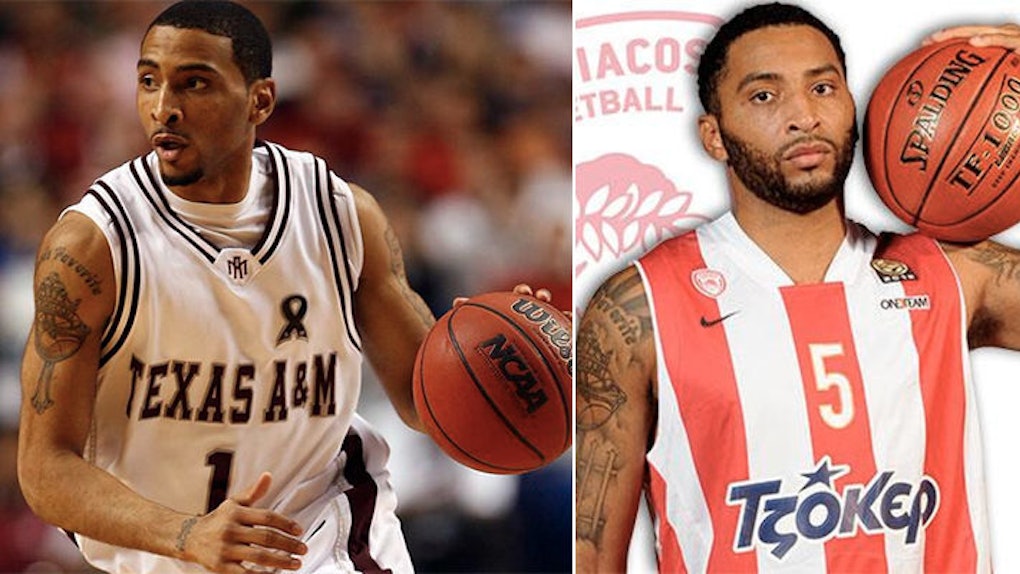 Where Are They Now? 23 March Madness Heroes Who Never Made It

Whether you realize it or not, college basketball has always been about the one and done.

How could any sport that crowns champions based on a single-elimination, 64-team tournament be otherwise described?

March Madness is built on late runs and momentum, often fueled by the play of one individual rather than an entire team.

While UNC has always been something of a college basketball powerhouse, it was the heroics of Sean May in 2005 that propelled the Tar Heels to their first title since 1993.

While May -- like so many others who have danced in March -- was able to reach the pinnacle of college basketball, his game did not translate to the NBA.

Here are some other March Madness legends who killed it in college but couldn't be found after making the leap to the next level.

Harold Miner: From 'Baby Jordan' to only four NBA seasons.

Throwing down dunks with the number 23 on his back, Harold Miner was once dubbed “Baby Jordan.”

Although he was taken 12th overall in the 1992 NBA Draft by the Miami Heat and won two Slam Dunk Contests, Baby Jordan played just four seasons in the league.

"@NBATV: Harold Miner cements his legacy as a dunk legend as our marathon continues with 1995 next! pic.twitter.com/dWAijHXK6H" <~ baby Jordan! — Marcus The Martian (@MdotSImoN) February 12, 2015

In 2006, Adam Morrison was the NCAA Division I scoring leader, a first-team All-American and Co-Player of the Year.

Even though Morrison “won” two NBA championships with the Lakers (2009-2010), his career lasted just four years.

Chris Duhon: From rookie of the year to assistant coach at a small college.

In 2001, Chris Duhon was named ACC Rookie of the Year and won a national championship with Duke.

Brief stints with the Bulls, Knicks, Magic and Lakers followed for Duhon. He's currently an assistant coach at Marshall.

Casey Jacobsen: From All-American to basketball blogger for SLAM.

Casey Jacobsen was a 2001 first-team All-American and three-time All-Pac-10 selection.

The 22nd overall pick in the 2002 NBA Draft, Jacobsen would play most of his career in Europe. He also blogged for SLAM.

In 2013, Smith won a national championship with Louisville and was a first-team All-American.

Drafted by the New Orleans Pelicans in 2014, Smith has spent most of his post-college career in the D-League.

In addition to being crowned the tournament's Most Outstanding Player in 1992, Hurley was also a first-team All-American the following season.

Hurley was taken seventh overall in the 1993 NBA Draft, but a car accident, in which he went through the windshield and almost died, ruined any chance Hurley had at making it big.

In 2007, in his one season at Ohio State, Greg Oden led the Buckeyes to a national championship appearance against Florida. They lost 84-75.

Despite being first overall pick in the 2007 NBA Draft, Oden failed to take flight as a result of multiple injuries and surgeries.

Domestic assault and drinking issues came into play, and Oden says he has no interest in returning to basketball at the moment.

Despite being taken with the 11th overall pick in the 2007, Law currently plays for Olympiacos in Greece.

God Shammgod: From Providence student-athlete to just a student.

In 1997, with one of the greatest names in NCAA history, Shammgod led the Providence Friars to the Elite Eight.

Shammgod's legacy grows every time someone crosses the crap out of a defender; he also went back to Providence to get his degree and is currently helping his former program grow.

Despite the loss of teammate and friend Hank Gathers just months earlier, Bo Kimble led 11th-seeded Loyola Marymount on a Cinderella run to the 1990 Elite Eight.

Kimble was taken by the Clippers with the eighth overall pick in the 1990 NBA Draft, only to have his career end just three years later.

Drafted by the Memphis Grizzlies with the second overall pick in 2009, Thabeet currently plays for the Grand Rapids Drive in the NBA D-League.

After hitting an unbelievable three-pointer to seal an upset victory over first-seeded Kansas in the second round of the 2010 tournament, Ali landed on the cover of Sports Illustrated.

Farokhmanesh never made it to the NBA, but he bounced around Europe before becoming an assistant coach at Nebraska.

Excited to announce that I have the opportunity to join #Nebrasketball as a GA this coming year! #GBR #HUSKERS pic.twitter.com/CjqjgNWXEl — Ali Farokhmanesh (@farokhmanesh5) August 20, 2014

After a stellar national semifinal game against Kansas, Dixon led Maryland to a victory over Indiana in the 2002 National Championship.

After an NBA career that included several stops -- bookended by stints in Washington -- Dixon joined the Maryland coaching staff.

Bryce Drew: From sinking a historic shot to coaching a mediocre team.

In 1998, Bryce Drew propelled 13th-seeded Valparaiso to a victory over fourth-seeded Ole Miss with a last-second three-pointer, known simply as “The Shot.”

After a brief stint in the NBA and Europe, Drew took over as head coach of his alma mater in 2011.

Ed O'Bannon: Winning on the court to winning a lawsuit against the NCAA.

He was taken ninth in the 1995 draft by the New Jersey Nets, and recently, he made headlines again for winning an antitrust lawsuit against the NCAA.

Christian Laettner: From the most feared to the most hated.

Laettner received just one All-Star nod during his near 15-year career and was recently featured on ESPN's "30 for 30."

Rumeal Robinson: '89 champion to six and a half years in prison.

Robinson, the 10th overall pick by the Atlanta Hawks in 1990, was recently sentenced to six and a half years in prison for bank bribery and wire fraud.

May required knee surgery less than two months into his NBA career... He currently plays in France.

Mateen Cleaves led the Michigan State Spartans to their last national championship in 2000, and he was named the Final Four's Most Outstanding Player in the process.

Cleaves had brief stints with the Pistons, Kings, Cavaliers and SuperSonics, but you may know him best for his work in music management.

A second round selection for the Pistons in 2014, the former Louisville Cardinal currently plays for the Erie BayHawks in the NBA D-League.

An NCAA champion in 2003 with Syracuse, Warrick was a first-team All-American and Big East Player of the Year in 2005.

Warrick was taken 19th overall in the 2005 NBA Draft by the Memphis Grizzlies, but he currently plays for Torku Konyaspor in Turkey.

Jay Bilas was an NCAA champion with Duke in 1986; he was also a four-year starter under Coach K.

While he never made it big in the NBA, he currently anchors ESPN's college basketball coverage and drops rap lines on Twitter.

He was the second overall pick in the 2002 NBA Draft, but a motorcycle accident caused Williams to pursue his current role as a college basketball analyst for ESPN.