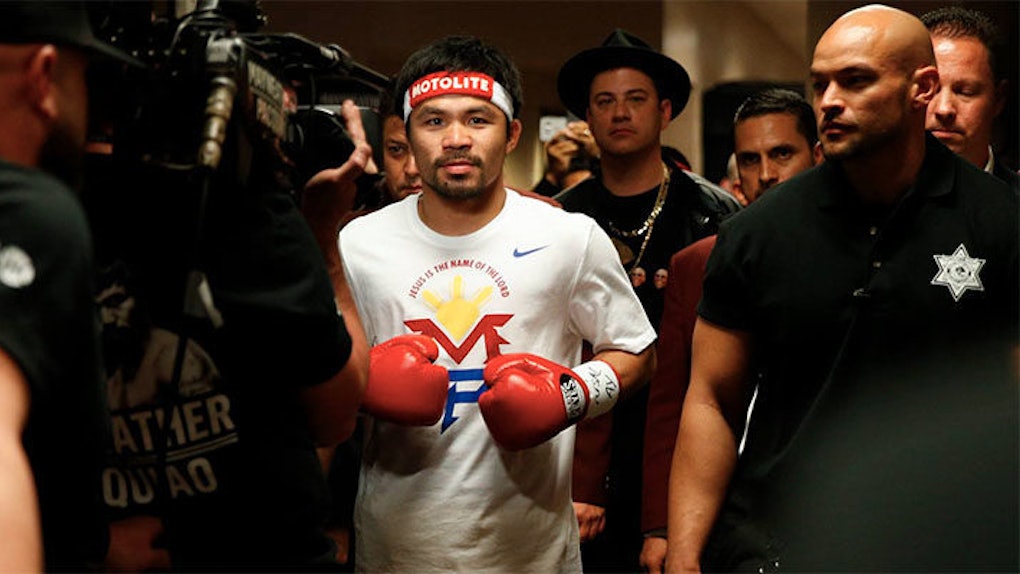 Manny Pacquiao Could Face Perjury Charges For Lying About His Injury

Manny Pacquiao may have eaten enough of Floyd Mayweather's punches on Saturday, but he still might get served.

After fighting with a tear in his rotator cuff, despite informing the Nevada State Athletic Commission before the fight he was not injured, the Filipino boxer now faces the legitimate possibility of being charged with perjury.

Disclosure is a big thing for us, and honesty. The commission at some point will have to discuss (Pacquiao's medical questionnaire). I've got to run through the process with the (Nevada) Attorney General (Adam Laxalt). But they do sign that document under the penalty of perjury.

This mini-controversy, if you will, stems from a pre-fight questionnaire given to Pacquiao on Saturday night.

When asked if he had any injuries, he marked "no" in the according box.

After the fight, though, Pacquiao revealed he had a tear in his right shoulder and he'd sustained the injury over a month ago.

Now, the fighter faces nine to 12 months of recovery after it was announced today he will soon undergo surgery to repair the shoulder.

Manny Pacquiao to undergo surgery to repair "significant tear" in his rotator cuff, will be out 9-12 months. » http://t.co/mZWzAUr85L — SportsCenter (@SportsCenter) May 5, 2015

But if the Nevada State Athletic Commission is willing to take him to court, Pacquiao will have much more than his recuperation to worry about over the next year.