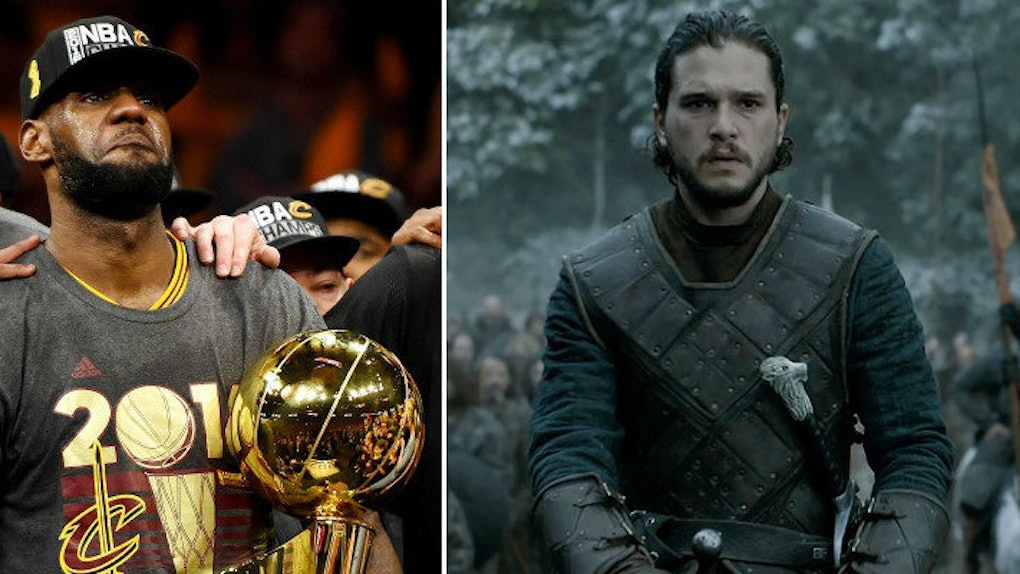 Game 7 Of Thrones: How LeBron James Is The Jon Snow Of Basketball

I've never really disputed the fact when it rains, it pours. In my experience, this idiom has proven true, both positively and negatively, time and time again.

At around 8 pm EST, LeBron James and the Cleveland Cavaliers squared off against Steph Curry and the Golden State Warriors in a winner-take-all Game 7 to decide who would be crowned NBA champs.

At around 9 pm EST, Jon Snow and his army squared off against Ramsay Bolton and his forces in a winner-take-all battle for Winterfell and control of the North.

If you watched both events unfold, then you also know when it rains, it really does pour.

For one night, fans of both the NBA and "GoT" were treated to epic battles beyond anyone's imagination.

It's easy to draw parallels between Jon Snow and LeBron James, based purely on Game 7 of the NBA Finals and the "Battle of the Bastards."

However, if you've been watching "Game of Thrones" since the beginning of season five and LeBron James' journey since rejoining the Cavaliers in 2014, then you know these two protagonists have more in common than just great victories at the most crucial moments.

On paper, it's been a virtually perfect return to Cleveland for LeBron James. In two seasons, he's led the Cavs to two NBA Finals appearances and one NBA championship. However, a closer look at James' last two seasons playing for the team that drafted him reveals a very different story.

Sure, many Ohioans are overjoyed now that LeBron has ended Cleveland's 52-year championship drought, but after making last year's NBA Finals only to come up short against the same team they just beat, many thought the 31-year-old James couldn't get it done in his hometown.

There were murmurs about coaching changes, player trades and a divided locker room, with James at the center of every discussion even loosely pertaining to the team.

Despite being the best team in the Eastern Conference, by a pretty sizable margin, some tweets and headlines would have had you believe the Cavs were in last place, without a shot of even making the playoffs -- let alone winning a championship.

Jon Snow became Lord Commander of the Night's Watch under pretty volatile conditions. Ser Alliser Thorne, and presumably those loyal to him, not only disapproved of Jon Snow as Lord Commander but pretty much wanted him dead.

Allowing the Free Folk to come over the Wall was a highly unpopular decision, and one that ultimately cost Snow his life at the hands of his own men.

Many wanted to point the finger at LeBron James when former Cleveland Cavaliers coach David Blatt was fired earlier this year, claiming management would always put LeBron's desires over what was in the best interest of the team. He just wanted to win.

In the cases of Jon Snow and LeBron James, everyone was wrong.

Sure, it might be hard to quantifiably prove Blatt's firing is what allowed the Cavs to take the next step and win a championship, but you can argue LeBron only wanted what was best for his team at the time.

After he spent time with them and learned from them, Jon Snow knew the Free Folk outside the Wall were fiercely loyal, and they would die if they weren't offered the protection of Castle Black.

Snow knew he needed folks like Tormund Giantsbane by his side when the time came for a great battle. James knew he needed a unified locker room and clear leadership if the Cavs were going to win an NBA title.

There's also the obvious comparison of both heroes coming back from the dead.

No NBA team had ever come back from being down three games to one in the Finals, but LeBron rallied his forces and got them to believe in something bigger than themselves.

After coming back from the dead and winning Game 7, the NBA Finals MVP said,

After he was killed by his own brothers of the Night's Watch, Jon Snow literally came back from the dead thanks to the Red Woman, Melisandre. Sure, Jon Snow is a beloved character on "Game of Thrones," but, presumably, he was brought back because his mission wasn't yet complete.

On the eve of the "Battle of the Bastards," with his side outnumbered roughly three to one, Jon Snow said,

Battles have been won against greater odds. I fought beyond the Wall against worse than Ramsay Bolton.

Snow took back Winterfell and control of the North for the Starks. LeBron took back the NBA title and long-awaited bragging rights for the city of Cleveland.

Cleveland, the North and the rest of us will always remember.