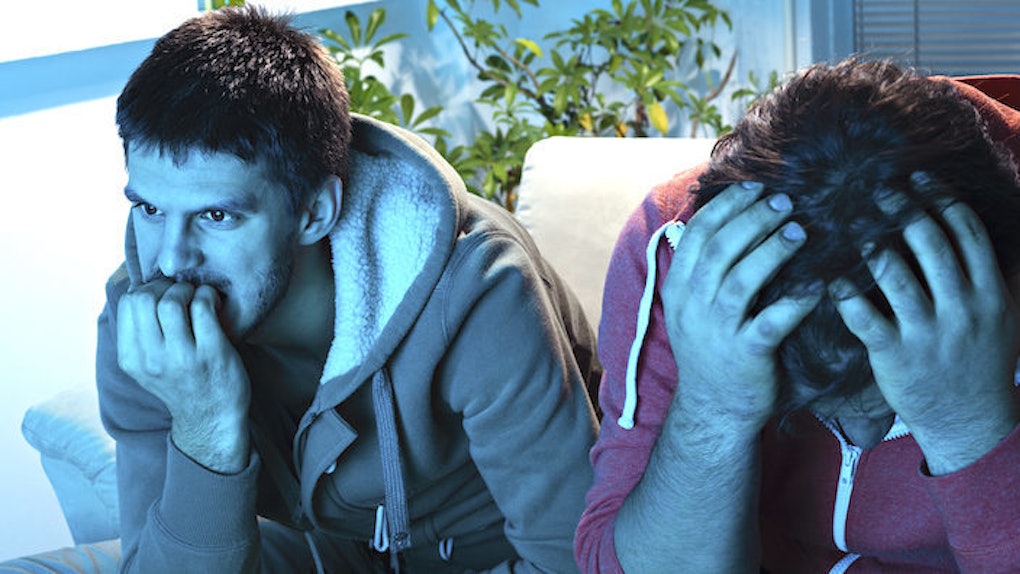 21 Emotional Stages Every NFL Fan Goes Through On Sundays

From early September to late December, Sundays can be very dangerous.

If you disagree with the above statement, you're clearly not an NFL fan or you don't drink like most football fans.

For many, the NFL season takes the term "Sunday Funday" to a whole new level.

Mimosas and bellinis at brunch? That's cute. But when it comes to the passion -- lunacy? -- of NFL fans, we're talking about 11 am shots of Jameson with a side of Bud Light for breakfast.

Saturday nights don't really exist, at least not for NFL fans who are older than 23, because you have to feel fresh and ready to drink come Sunday morning.

Some fans drink on NFL Sundays to get pumped up for their team's game, some do it to combat the nerves that accompany a three-and-a-half-hour contest and others imbibe because their team is so far from the playoffs they can't bear to watch them while sober.

Such is life for an NFL fan in the fall.

Because we can't all play on Monday or Thursday night, these are the 21 emotional stages every NFL fan goes through on Sunday game day.

The realization game day is finally here, and you're so glad you didn't drink last night.

Let's be honest, at a certain point in life it's nearly impossible to go out Saturday night and be ready to roll on Sunday morning for football.

It's game day. You're hyped and ready to pound a Bloody Mary before you even get in the shower.

The optimism of a fresh pot of coffee and NFL Sunday Countdown blaring from the living room.

Considering it's Sunday morning, you might need a little jolt to get you going for what's sure to be an eventful day.

For NFL fans, there are few greater sounds than coffee brewing and Chris Berman yammering away with Chris Carter on NFL Countdown.

The butterflies you feel after hopping out of the shower and suiting up in your favorite player's jersey like it's a suit of armor.

Feeling fresh and clean, you throw on your hero's jersey and you're ready for battle.

Knights fought with swords, Drew Brees fights with a rocket arm and you battle with a 30-rack and chicken wings.

The excitement you get with each buzz of your phone from your insane group text.

Part of the build-up to any good football game is the banter that comes before it.

You're excited to see your team in action, and that feeling is intensified by sharing your passion with fellow die-hard fans.

The invigoration of walking to the grocery store to pick up snacks and, more importantly, booze.

Most of the time, you'd probably scoff your head at a Sunday morning workout, but I'll walk two miles to get my hands on football food and alcohol. And feel great doing it.

Considering the fact you didn't go out on Saturday, the walk is a welcomed precursor to all the damage you're about to do to your body.

That burst of hype you get when your friends ring the doorbell and you crack into that first beer.

It's f*cking go time, baby. The sun is shining, the beer is cold and now we can all be drunken fools together in our fortress of football.

The sound of that first beer can cracking is euphoric.

The trepidation of ripping that first shot with the crew about an hour and a half before kick off.

You've had a few drinks, and one of your friends lines up a round of shots. They don't ask, they know whose apartment they're in.

You're cautious at first, but you throw one back and now you feel like you can run through a brick wall.

The slow slip into tipsiness as the pre-game coverage comes on and the volume of your voice starts to rise with confidence and enthusiasm.

You turn the volume up on the television. We're moments away from the game that could define our entire season -- funny, it's the same feeling every single Sunday -- and the combination of alcohol and excitement has you feeling more than a little tipsy.

The piousness you feel as the teams line up for the opening kick-off.

The game's about to kick off, and I don't care who you are, you know you say a silent prayer to some form of deity for good luck and good fortune.

"Let my team win this game, and I promise I won't slack off at work once this week."

The jubilation of watching your team get a stop and then score a field goal to go up 3-0.

How do you like us now? We just held your sorry offense to a three and out and marched down the field to score the game's first points.

That probably calls for another shot and a beer.

Feeling like the sky is falling when you look up and see it's 14-3 and the second quarter is about to begin.

How did we get here? Your team was up and looking good on both sides of the ball. But then they had one bad series, and the opposition took full advantage.

Now, you're wondering why you took a shot when you went up 3-0, and all of the sudden you have a big meeting on Monday you didn't prepare for.

The waviness you get when you look out the window and realize you're kind of sauced at 2 in the afternoon.

Hey, is the sun always that bright at this time of day? Yup, it's official, you're no longer sober.

And God help you if your team doesn't end up on the winning end by the time the clock hits zero.

The exhilaration you feel when your team scores a touchdown and a field goal to bring it to 14-13 at the half.

You never doubted your boys for a minute. You were down, but it's a long game, you knew this going into it.

Your team is only down one at the half, and this is quite possibly the greatest game in the history of the sport.

The pitfall into "see you Monday morning" after ripping the bong, chugging two beers and downing two shots because y'all got this in the second half.

Since we're only down one with the game hanging in the balance, it's probably time to go from feeling nice to "I won't be functioning normally again until Monday evening."

Get lit, get hyped, the second half is about to begin.

The light-headed numbness that follows the tribal war scream you let out after your team goes up 20-14 midway through the third.

When your team comes all the way back from being down 14-13 to up 20-14, the only logical reaction is to scream until you see stars and can no longer feel your face.

Does the alcohol have anything to do with that? Maybe.

The fade to blackout you feel after the opposing team takes a 24-20 lead in the fourth and you've lost count of how many beers you've had.

Why would we come all the way back just to blow it in the fourth? No. We got this. We've seen our quarterback pull us back from these situations late in games 100 times.

This is definitely going to be one of those times.

The shock and stomach pains that accompany your team getting picked off in the red zone with less than two minutes left on the clock.

Did that idiot just throw an interception as we were marching downfield to score the game-winning touchdown?

You tell yourself there's still time to get a stop, but we all know it's not going to happen.

The regret of drinking enough booze to drown a small island nation after the clock reads zero and you're left with a gut-wrenching loss.

You're done. You''re never watching another game this season. Hell, maybe you vow to take next year off, too.

And to make matter worse, you can suddenly recount every single drop of liquor you ingested today.

The headache that sets in after your friends dip and you have to clean up blue cheese dressing from crevices you never knew your apartment had.

You say "peace" to your friends and contemplate calling out of work tomorrow. Then, you rip off your jersey and hurl it into the corner, never to be seen again.

F*ck, now you have to clean up the mess you made during that four-hour blood bath.

The fullness you feel after you chug copious amounts of water in an attempt to be "good" for work on Monday morning.

Then, reality starts to set in and you're not actually going to call out tomorrow. And, holy hell, how did it get to be 6:30 pm already?

It's only a matter of time before the scaries set in and all you can hear in your head is the sound of your heartbeat.

Water will help, but there's no instant cure. If only your team would've won, right?

The shakes you feel after you turn off the lights but can't fall asleep despite how tired your body feels.

It's 11 pm, you turn off the television and the lights, but sleep just won't come. You're freezing, then you're sweating, and you're wondering why you did all that drinking and eating.

It's 2 am... then it's 4 am, and by the time you know it, your alarm is going off like a nuclear bomb warning.

It's Monday. You lost the battle, but come Thursday, you'll be ready to go to war all over again.