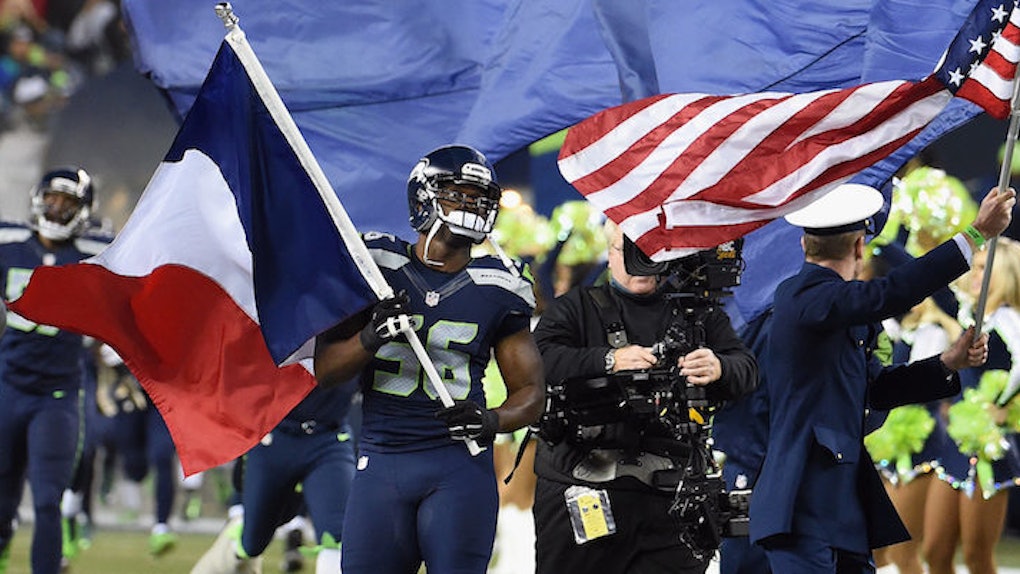 On Friday, 129 civilians lost their lives during a calculated attack on Paris, which included suicide bombings and shootings.

The entire global community came to a standstill as horror and fear gripped the world.

In the immediate moments following the attacks, many took to social media to express their shock and sorrow over what had just occurred, including many members of the global sports community.

From FC Barcelona to the Denver Broncos, numerous organizations tweeted and posted to convey sadness and show support for the victims and their families.

From English soccer matches to NFL games, there were moving tributes of all manner.

Here's how teams, athletes and fans from around the world responded to the #ParisAttacks.

LeBron James played basketball Friday night, but not without thinking about the victims and their families in Paris.

As I get ready for my game I can't help but to think of the tragedy in Paris! My God what's up with people. Prayers sent to all the familes! — LeBron James (@KingJames) November 13, 2015

The no. 1 men's tennis player in the world couldn't come to grips with what occurred.

The world's fastest man was quick to offer condolences for those lost in the attacks.

So sad to hear of the attacks in Paris. Thoughts with all the victims and their loved one.. #Prayers4Paris — Usain St. Leo Bolt (@usainbolt) November 14, 2015

The Rock posted a video telling the people of Paris to stay strong in this difficult time.

Cristiano Ronaldo showed how the world is standing with Paris in the aftermath of the horror.

I can't be indifferent to the horror of the Paris attacks. My thoughts go to the victims & families. #prayers4paris pic.twitter.com/6RxwdVTpOi — Cristiano Ronaldo (@Cristiano) November 14, 2015

Kobe Bryant called for peace and prayer in the wake of the attacks.

With heavy hearts, Paris' biggest soccer team tweeted support for the victims and their families.

The NFL had a moment of silence before each game on Sunday.

And England's Football League did the same throughout the weekend.

A minute’s silence will precede all matches this weekend following the tragic events of the #ParisAttacks pic.twitter.com/7QFANsZANO — The Football League (@football_league) November 14, 2015

Army football took to the field on Saturday carrying the French flag.

And French F1 driver Romain Grosjean raced with a heavy heart in Brazil this weekend.

"The best I can do is put the French flag on the podium. It'll be for the people of Paris." – @RGrosjean. #BrazilGP pic.twitter.com/LYDXqazWwu — Mobil 1 The Grid (@grid1tv) November 15, 2015

The New York Rangers held a moving moment of silence for the victims.

Moment of silence for all those affected by the tragedies in Paris. #PrayForParispic.twitter.com/1ZsGnuywmW — New York Rangers (@NYRangers) November 16, 2015

On Saturday, ASU football fans had one eye on their team and the other on Paris.

.@NFL plans moment of silence for victims of Paris attacks prior to starts of every game. https://t.co/vaKL5hncOX pic.twitter.com/gUjamJm0qL — NBC Sports (@NBCSports) November 15, 2015

I'm appalled by the shocking scenes in Paris at the moment. My thoughts are with all the victims and innocent people suffering right now. — Thierry Henry (@ThierryHenry) November 13, 2015

And the Seahawks and Cardinals paid a moving tribute to the Paris victims during Sunday Night Football.