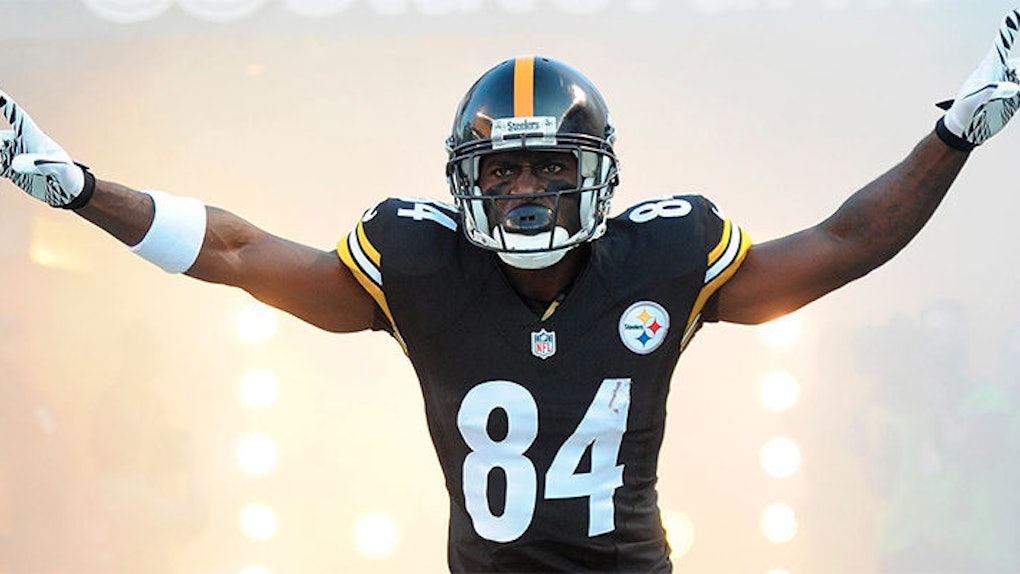 Antonio Brown Used To Be A Homeless Teenager, Now He's An NFL Star

With only a 5-foot-10, 186 pound frame to his name, there is a strong argument that Antonio Brown might be, pound-for-pound, the best wide receiver in the NFL.

Between the past two seasons alone, Brown caught just under 240 receptions. Last year, he obliterated the Pittsburgh Steelers' previous franchise record for receiving yards, which he set himself, with 1,698 of his own.

That mark was also good for second all-time in the NFL.

Now, with the Miami native entering the sixth season of his career at 27 years of age, it's safe to say Brown has proved himself as a bonafide stud.

It's also safe to say the now black and yellow Rolls Royce-riding Pro Bowler has come a long way from where he was in high school.

Why? Because Antonio Brown's gone from homeless teenager to an NFL star.

Before Brown was a standout receiver at Central Michigan University, the Florida native was a teenager who grew up in the Liberty City neighborhood of Miami.

Liberty City can be described as a lot of things; people from the neighborhood itself will describe it as "rough," and that's exactly what Brown says his teenage years were.

One would imagine that even the average life in Liberty City would be far from settled, but Brown's, at least at one point, seemed even worse than that.

The Steelers star is the son of "Touchdown" Eddie Brown, a former Arena Football League player.

Eddie Brown was voted the league's greatest player ever, even ahead of Kurt Warner, as Scout.com's Jim Wexell notes, but Dad wasn't around during Antonio's teenage years.

Instead, the younger Brown lived with his mother. That is, until she remarried, at which point Antonio was thrown out of the house for a reason that is never (or at least seldom) specified when Brown tells his story publicly.

The bottom line, though? Antonio Brown was homeless for around six months during his senior year of high school, he told the Detroit Free Press.

Brown gave his most in-depth, concise account of those days in an interview with Dan LeBetard's "Highly Questionable" in 2012.

Following high school, Brown was denied the chance to play college football at Florida State because of academic reasons.

He instead went to North Carolina Tech, a prep school were he could play out another year while waiting to retake the SAT.

It was at NC Tech that he started getting recruited by a receivers coach at West Virginia. When said coach left WVU for Central Michigan, Brown followed.

He was so impressive as a walk-on there, that he was offered a scholarship just a short time into his first season.

For the next years, he proceeded to be impressive, to the point that he became a legitimate NFL prospect.

The rest, as they say, is history:

Despite what Antonio Brown has been through, these days, fans mostly know him for one thing: being great

After the 2014 season, he was voted by peers as the eighth best player in the NFL.

The only wide receiver to top him was the 6-foot-5 Calvin Johnson, at no. 5.

Brown is small, but his footwork is on another level.

And he's so good he can run routes with his eyes closed.

Overall, his skills are just amazing.

He even finds time to throw a touchdown pass once in a while.

That is, when he's not coming up with interesting dance celebrations.

His background isn't the only thing that serves as motivation, though. His jersey number does, too.

And he'll never forget that.

That won't change, regardless of whether or not his greatest competitors think he's the best.

Or if he's a fantasy stud.

Likewise, Steelers fans are unlikely to forget how lucky they are to have found this gem in the sixth round.