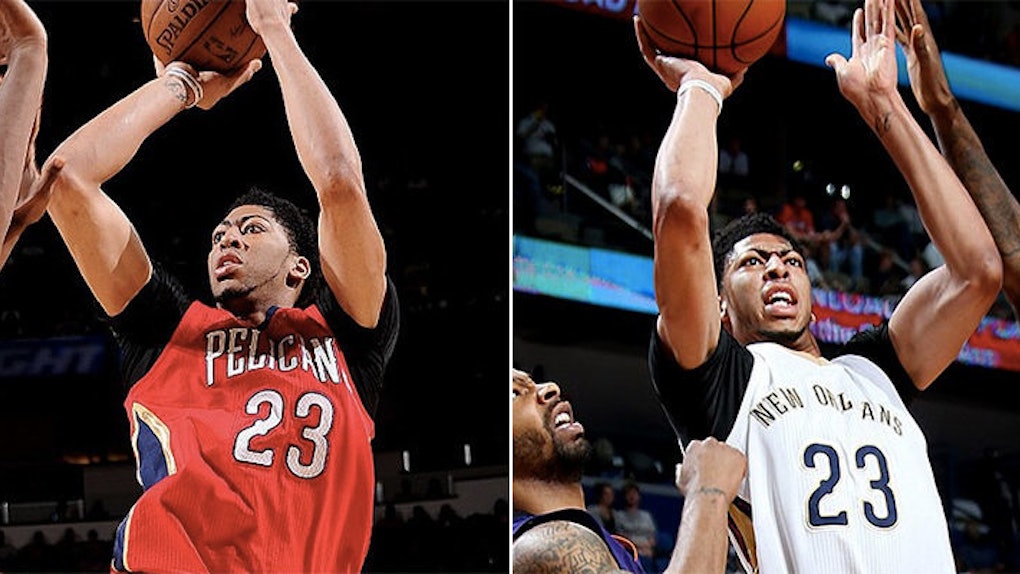 With Added Range, Anthony Davis Will Now Be Virtually Unstoppable

I remember the day Anthony Davis committed to the University of Kentucky like it was yesterday.

The Cats had already secured commitments from Michael Kidd-Gilchrist (fresh off of adding the "Kidd" to his name) and Marquis Teague.

It was August before his senior year of high school, and he was not yet the unanimous top player in the country.

I am a lifelong UK fan, who listens to Kentucky Sports Radio and reads Cats Pause on a daily basis, so I had seen plenty of Davis' highlight reels well before his commitment.

He was rail-thin and looked like a muppet, but as soon as I saw him shoot the ball, I knew he was special. I had never seen a big man with such a pure shooting release.

By now we all know the story: Davis was 6'3" before experiencing a massive growth spurt in his final two years of high school.

He was receiving interest from some Division 1 schools -- even before the growth spurt -- due to his ability to handle the ball and create shots for himself. These are skills he was somehow able to retain as his body grew.

He also retained a guard's shooting stroke. In today's NBA, there are not many big guys with a smooth shooting release.

For every Dirk Nowitzki and Kevin Durant in the league, there are about 10 Joakim Noahs, DeAndre Jordans and Dwight Howards.

Davis has put his shot to work during his first three seasons, extending his go-go-gadget arms, and knocking down smooth, mid-range turnarounds over helpless defenders.

As if that is not hard enough to prepare for, he is reportedly working on extending his range out to beyond the three point line.

Everyone knows he is one of the league's top defensive assets, and his offensive game is quickly catching up.

Often, when players are rumored to be adding elements to their game, it simply means they are devoting a little extra time in practice to a skill previously ignored, due to its lack of practicality for the particular player's role.

In a best-case scenario, a center will come back from the offseason and be able to knock down a few more baby jumpers from just outside the paint. Or, a “slashing” point guard will connect with 30 percent of their three-point attempts, instead of 25 percent.

As a threat to other teams, Davis adding a three-point shot to his arsenal is way beyond anything other players are doing to improve.

Though his three-point shooting hasn't been great so far in his career, he has improved both his field goal and free throw percentages in each of his first three seasons, reaching career highs in 2014-15 of 53 and 80 percent, respectively.

His lateral quickness and ability to handle the ball make him a threat to score, no matter where he receives the ball. An ability to pull up from beyond the arc would make him virtually un-guardable.

He does not have the strength and bulk of LeBron James, but his absolutely mind-boggling length allows him to get a shot off over the smaller, quicker defenders. His guard skills and explosiveness allow him to get by — or hop over -- defenders of similar heights.

He will continue to kiss soft fadeaways off the glass, slam home put-backs and fly down court to receive fast-break lobs.

But, should he add a deep shooting stroke in the same vein as that of Durant, Davis might just reach out and take the league's best player mantle, rather than waiting for LeBron to pass it.