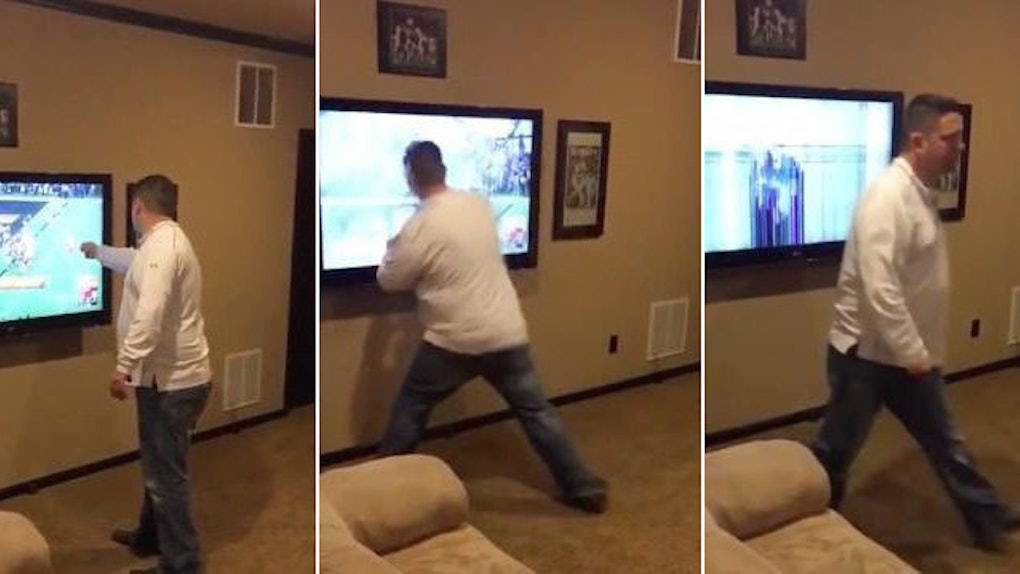 Monday night, in a game that lasted over four hours, the Clemson Tigers defeated the Alabama Crimson Tide with a last-second touchdown to win the college football National Championship.

After Clemson quarterback Deshaun Watson connected with wide receiver Hunter Renfrow to give the Tigers a 34-31 lead with one second left on the clock, the scene at Raymond James Stadium was that of sheer pandemonium.

Clemson's fans were in a state of delirium, while Alabama's fans probably wished the earth would swallow them whole.

The Clemson Tigers rallied from 14 down to come back and beat the reigning national champions, so it was only natural for Alabama fans to lose their shit a bit following the heartbreaking loss.

One dude, though, who appears to have opted to watch the game from the comfort of his living room, is probably on his way to Best Buy this afternoon to purchase a new high-def television.

This dude didn't hesitate for a second, either, so, let's break it down for everyone watching at home.

At the beginning of the video, you can see this guy literally standing in front of his television, yelling, "You ain't shit," repeatedly.

I think he's talking to Clemson QB Deshaun Watson, but this could be a collective "you ain't shit" directed at the entire Tiger offense.

When this dude started screaming at the television from this close range, I feel like whoever was recording this trainwreck should've known what was coming.

As soon as Renfrow makes the touchdown grab with a second left on the clock, this dude reacts by taking his fist and putting it through his shiny television.

I have to give it to this Alabama fan, he really connects with the screen. It's almost as good as the connection between Watson and Renfrow.

After punching his television, this dude walked it off like he just took out the trash.

Is this sicko laughing at the end? Holy hell!