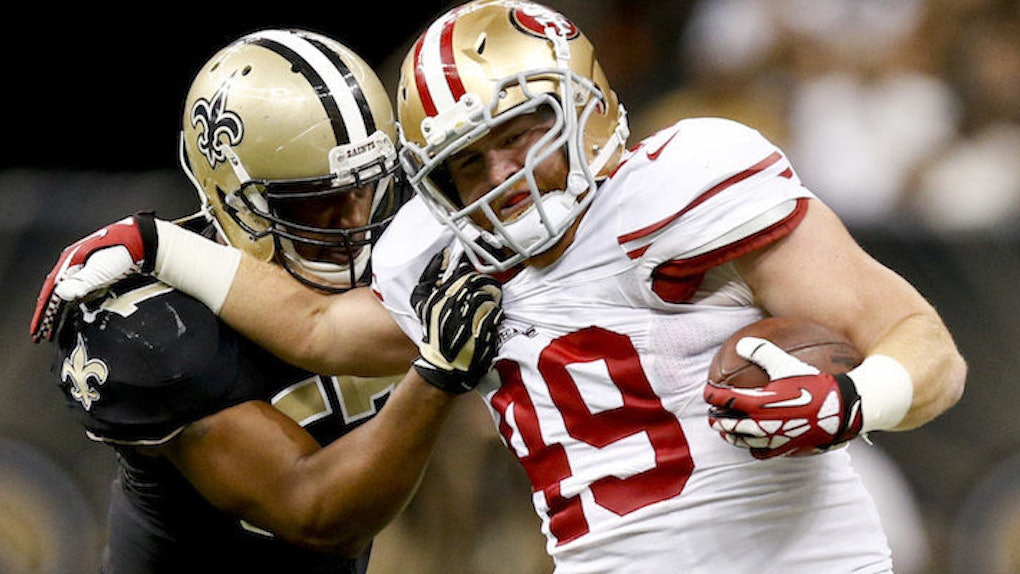 Labor Day weekend wasn't all fun and games for the 49ers.

After a drunken debacle that took place early Monday morning in San Francisco, former tight end Bruce Miller was released from the team on account of arrest.

The 29-year-old player was charged with elder abuse, assault, battery and threats after a drunken brawl at the Marriot Hotel in San Francisco's Fisherman's Wharf early Monday morning.

Based off of the former 49ers Instagram post, his Sunday started off seemingly harmless with "the boys" at the local Palm House restaurant.

But before long, the night took a turn for the worst when he found out there were no rooms available at the hotel he planned on staying at.

According to the police, Miller wandered back to the Marriot early Monday morning and attempted to check in at 2:45 am. He was turned down when there were still no rooms available.

He then knocked on a random hotel door and entered a room occupied by a 29-year-old man and his parents, including his 70-year-old father. Sources by KUTV cited Miller, in a drunken oblivion, began beating both men, leaving them hospitalized due to broken bones.

The police arrived at the Marriot after Miller had already left. He wandered to a hotel across the street post-fight, where CCTV security cameras caught him covered in blood and vomiting outside.

After posting a $78,000 bail, Miller was released for the San Francisco County Jail on Monday -- but will not be returning as a player for the 49ers.

Based on the lack of hesitation on releasing Miller, it's highly doubtful he will be returning to his football career anytime soon.