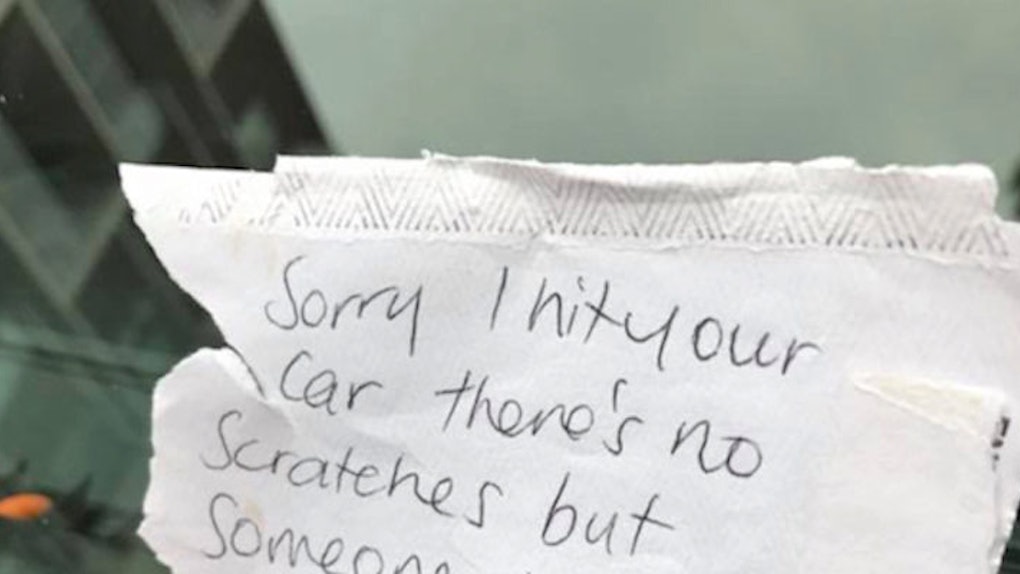 Deep down, I'd truly like to believe that the world is still filled with good, pure people.

However, awful people constantly remind me that the majority of Earth is populated with shitty, passive-aggressive people.

Case in point: a person who left a heartless note after hitting someone else's car.

Apparently, a man from Sydney, Australia, named Nayte L. Howarth was taking a stroll around the city when he noticed a small piece of paper tucked beneath the windshield wiper of a black Jeep.

This mysterious piece of paper piqued Howarth's curiosity, so he walked over to the car in order to get a closer look.

Little did Howarth know he was about to discover a message that had been written by someone who might just be the world's worst person.

It turns out that the anonymous note-leaver left a message on the windshield in order to inform the Jeep owner that he or she had accidentally hit the parked car.

But rather than leaving a note that said something along with lines of "I'm sorry for hitting your car, here's my insurance info," Howarth found a message scribbled by an angry, passive-egressive asshole with atrocious grammar skills.

Sorry I hit your car, there's no scratches but someone was watching me. Your cars shit anyway. Shouldn't of blocked me in. Learn how to park cunt. xx

Yep, and you thought the simple "someone was watching me" note was pretty bad.

If you ask me there's a special place in hell for people that leave notes like this.

Plus, it's pretty apparent that the only shit things in this situation are 1) the note-leaver's attitude and 2) their ability to drive — not the victim's poor parked car.

All I can say is that I hope there were some surveillance cameras in the area that caught this evil individual in the act because the owner of this parked car definitely deserves some justice.

Citations: Driver goes above and beyond with offensive note after hitting car Read more: http://metro.co.uk/2016/12/19/driver-goes-above-and-beyond-with-offensive-note-after-hitting-car-6331896/#ixzz4TJ3AT5RB (Metro)