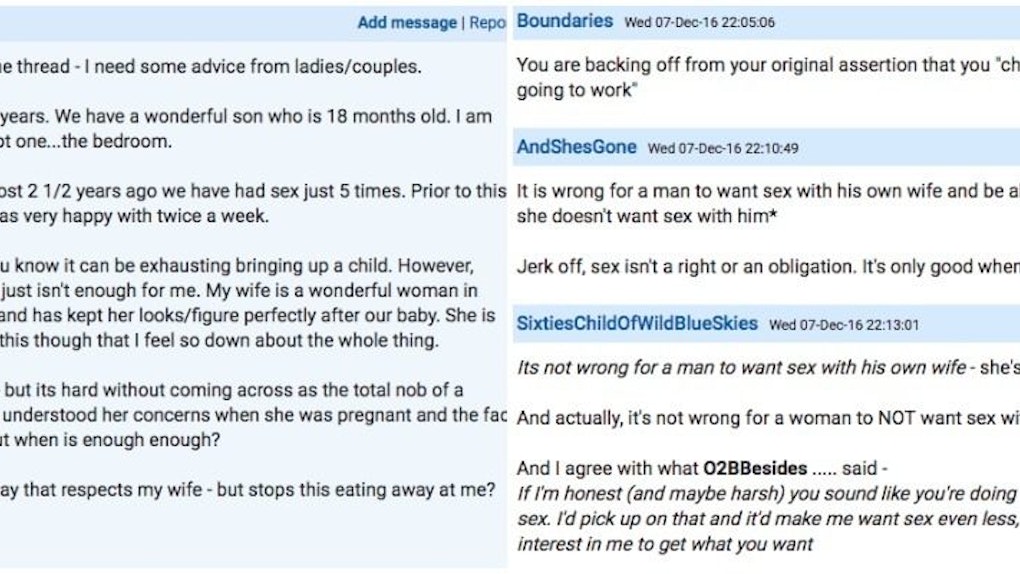 Man Gets Destroyed Online For Asking About Wife's Sex Drive

A husband got absolutely nailed online after seeking out help for his marital problem.

What started as an honest plea for help — with the husband looking to reignite his and his wife's sex life — ended with respondents going open season on the poor guy.

One woman mercilessly replied to the man:

Yikes. That's definitely harsh, but it didn't start off that way.

It all began when a user approached a forum on Mumsnet with a dilemma. Using the screen name "PseudoDad," the man wrote.

I need some advice from ladies/couples. I've been married to my wife for 6 years. We have a wonderful son who is 18 months old. I am happy in every aspect of life except one...the bedroom. Since our son was conceived almost 2 1/2 years ago we have had sex just 5 times. Prior to this, we weren't at it like rabbits but I was very happy with twice a week.

And respondents were fairly kind to him at first, relating their own experiences to his.

One woman wrote in response,

Perhaps she needs more foreplay - time, affection, talking, etc to get her In the mood now. I think that would help me.

But here's where it all went downhill. The husband admitted that he'd abandoned "nagging" his wife and had decided to move on to other tactics.

After an argument about lack of sex I realized nagging was never going to be the solution. So for the last six months I've tried a little charm offensive... But still no change.

From then on, the floodgates were opened. Women began accusing him of trying to manipulate his wife just to get "some." In general, the most negative responses all echoed the same message: You're not entitled to sex with her.

It is wrong for a man to want sex with his own wife and be all whingey and whiny about it * when she doesn't want sex with him* Jerk off, sex isn't a right or an obligation. It's only good when both people want to.

PseudoDad tried to walk his comments back, but it didn't help much. His post, which attracted over 400 responses, just turned into a stone-throwing contest.

One commenter bluntly told the man that he is a "knob and needs to give his wife a break."

To read more of the ruthless comments, check out the original post here, and watch in horror as this guy's world comes slowly crashing down.