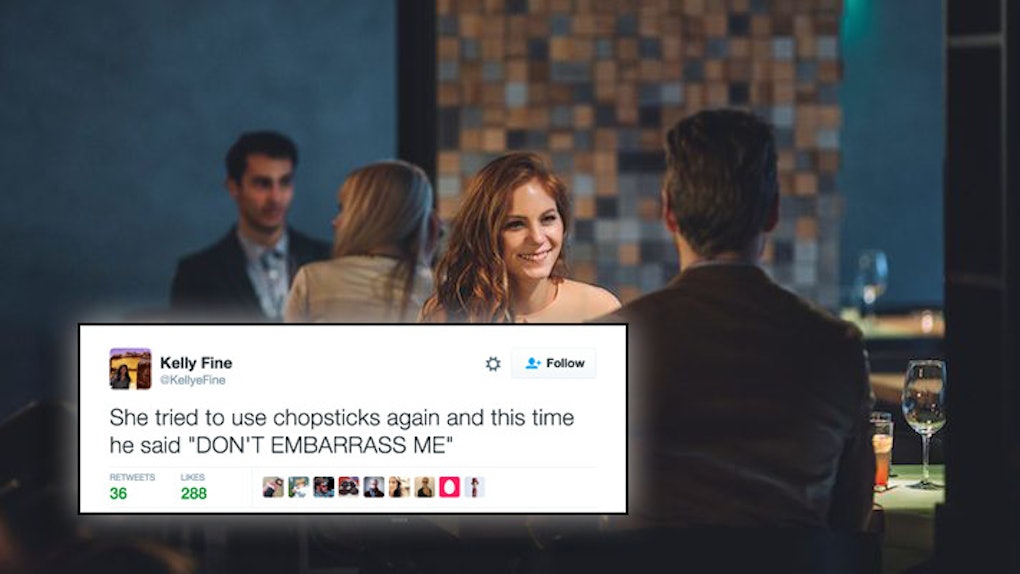 Kelly Fine recently stopped by a Japanese restaurant for dinner.

Little did she know, her sushi rolls would also come with a free show.

Yep, it turns out that Fine was seated in close proximity to what might just be the worst date that's ever gone down on the face of the planet.

Now you're probably thinking, "Oh, it couldn't have been that bad."

But trust me, this date was so awful it could qualify for a Guinness World record.

As Fine watched this train wreck of a dinner date unfold before her very eyes , she did the only logical thing anyone in her situation would do.

No, unfortunately, she didn't swoop in and save this woman from her douchey date by "accidentally" knocking over a candle and setting the restaurant on fire.

Instead, Fine, who is actually a copywriter from Texas, decided to capture every cringe-worthy second of this bad (but incredibly entertaining) date and share it on Twitter, Metro reports.

All I have to say is this woman's detailed live-tweet of the disaster dinner date will ruin your appetite.

You might not want to go on another date for the rest of your life.

Things obviously started off on a great note, since this guy didn't waste any time showing his date that he was a giant douche.

After letting everyone know that he was apparently too good for menus, he proceeded to be pretentious AF by complaining about the sushi selection. If you ask me, the only "major problem" here is this man.

Fine points out that this issue could have been easily been avoided had the man taken the time to read the menu like a normal person. SMDH.

The man then proceeded to be a condescending jerk while ordering wine.

Then, this man proved that he either has a terrible hearing problem or is some sort of satanic control freak.

Once again, the man reminds us of the issues that can arise from failing to read menus.

I'm starting to think that this guy might just use this as an excuse to cover up the fact that he can't read, because he acts like this isn't the first time a waitress has had to read the menu to him.

Just when you think things can't get any worse, he finds the right words to make things even more awkward.

Next, the guy starts reminiscing about the time locals introduced him to Japanese cuisine, San Fransisco locals to be exact.

Fine points out that the man may have strategically left out some details about the purpose of that "promotional tour" as well.

In addition to being an a-hole, this dude also appears to have some serious insecurities that are set off by breaking constant eye contact.

After commanding his date to look at him, he then proceeded to ask for yet another thing that wasn't on the menu he didn't read.

Now, I know this may sound hard to believe, but Fine reports that this might not be the couple's first date.

After overhearing the man talk shit about the woman's mother, Fine reports that there's a chance these two might actually be married.

I have to say, I really don't know how this woman puts up with this down-talking jerk on a daily basis.

After giving her some choice words to put in the back of her "little head," he talks about how words don't have power. Lolz.

Then he continues to remind us that he is a vile creature by eating the skin on his edamame.

I mean seriously, who the hell does that? I guess that's what happens when you learn how to eat Japanese food from the locals of San Fransisco.

Next, this weird edamame-shell-eating man moves onto the anti-Semitic comments.

Apparently, this guy treats his Jewish friend just as badly as he treats his date/possible wife.

The food finally comes, where upon the man refuses to tell his date WTF he insisted on ordering her for dinner. At this point, I bet she's praying it's some type of poison blowfish that will put her out of her misery.

This train wreck must have been even more entertaining in person because Fine couldn't bare to leave the restaurant after she finished her meal.

As they eat, the mean man continues to hide the identity of the fish from his date.

To make matters even worse, he then yells at her for embarrassing him with her subpar chopstick skills. Because let's be real, it's not like having the waitress read the menu to you isn't embarrassing or anything.

I'm not sure if this is some sort of subtle threat about what happens to people who embarrass this man, but he then casually informs his date that his brother is basically a blood thirsty serial killer.

The topic somehow changes from murder to truffles.

Shortly after, the woman introduces her date (whose name is actually Tony) to the owner of the restaurant. Tony continues to whine about the effing giant clams, of course.

Next, Tony recounts his experiences with Japanese food, and I think it's safe to assume that the owner definitely regrets the decision he made to walk over to this table.

Tony continues to tell the owner about the time he demanded to eat a giant squid head in Japan.

He's probably telling the truth, since he's made it pretty clear that he's a demanding d-bag who can't read menus.

Tony then announces that he's going outside to smoke a cigarette (yet another redeeming quality) and this is where our story of the date from hell ends.

Unfortunately, we'll never know the fate of that poor woman, or even what she was forced to eat for dinner that night.

But I think we can all agree that Kelly Fine is a true hero for reporting this live from the field via Twitter.