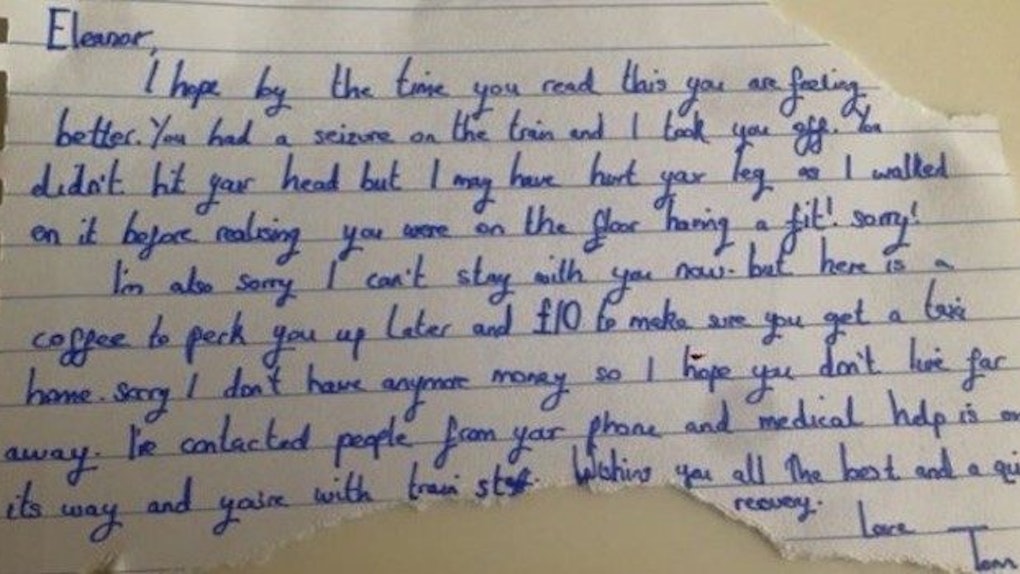 The moral of the story isn't that having a seizure is an easy way to make 10 British dollars. It's that humanity is nice and stuff.

So, like, don't go around trying to fake seizures for money.

Ellie Farnfield, 27, was riding a train in London when she experienced a seizure knocking her unconscious.

Thankfully, she is now OK. She recovered from the trauma, but when she regained consciousness, she found £10 ($15) and a mysterious letter addressed to her by the stranger who saved her when she went under.

Ellie posted the letter to Facebook hoping to track down her savior “Tom.”

The letter, addressed to the part-time acupuncture student, read,

Eleanor. I hope by the time you read this you are feeling better. You had a seizure on the train and I took you off. You didn't hit your head but I may have hurt your leg as I walked on it before [realizing] you were on the floor having a fit! Sorry! I'm also sorry I can't stay with you now, but here is a coffee to perk you up later and £10 to make sure you get a taxi home. Sorry I don't have anymore money so I hope you don't live far away. I've contacted people from your phone and medical help is on its way and you're with train staff. Wishing you all the best and a quick recovery. Love Tom.

People started #findtraintom, hoping to find Tom so Farnfield can say "thank you."

I just want to thank Tom for his help. I'd tell him: 'You're a star and I really, really appreciate it.' I'd also like to return the money. There is something really lovely about the kindness of a stranger. If I meet him, drinks are on me.

FREE DRINKS, TOM! GET IT!

Citations: Stranger leaves heartfelt note and £10 for taxi fare after woman suffers seizure on train (Metro), Woman who had a fit on a train was helped by stranger who left her £10 for a taxi and a touching note - now she's trying to track the man down (Daily Mail)