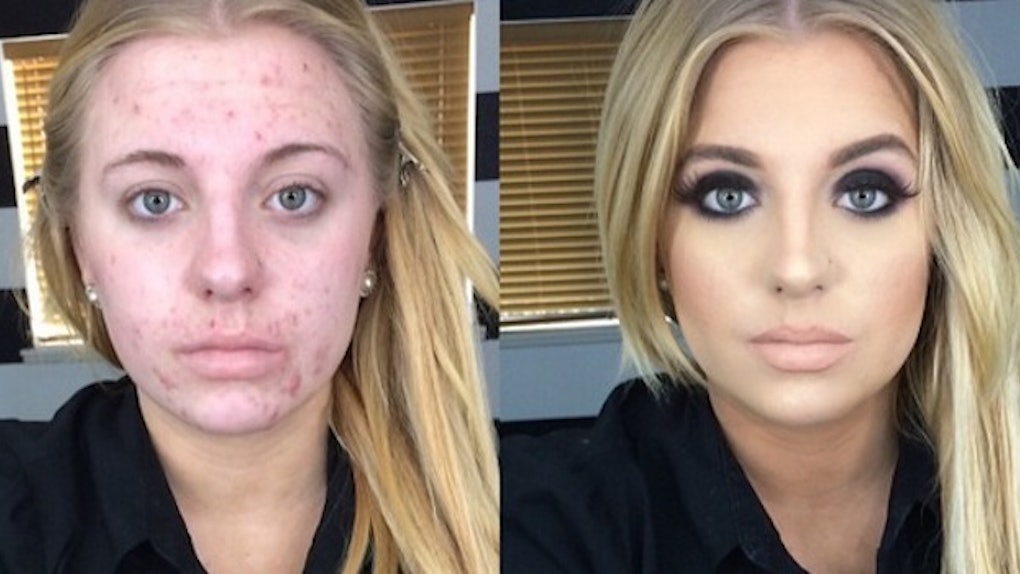 Ashley VanPevenage, 20, is rising above all the negativity she received after becoming the face of a negative meme and teaching the world a valuable lesson about self-respect.

The Tacoma, Washington student was subject to brutal hate from Internet commenters after this picture of her face went viral.

VanPevenage told BuzzFeed her skin was particularly bad on the post, which was uploaded by Instagrammer @MakeupByDreigh, because she was having an allergic reaction to benzoyl.

The picture was reposted by a Twitter user from Texas State University who lamented her own skin care problems.

I don't understand how people can do this and I can't figure out how to conceal a single pimple on my face pic.twitter.com/UiIvvagAvL — Virginia (@virtuallyvivi) February 9, 2015

The upload took off and quickly made its way around the Internet; it was retweeted almost 9,000 times on the account @SoDamnTrue.

I don't understand how people can do this and I can't figure out how to conceal a single pimple on my face pic.twitter.com/5SxuZAWCMZ — Typical Girl (@SoDamnTrue) February 10, 2015

With the retweets came the logical next step in anything on the Web: hate.

The meme stuck and VanPevenage's face was soon being retweeted and shared by thousands of accounts across multiple platforms across the world.

British DJ Samy Irssak, who has almost a million followers on Facebook, even posted Ashley's picture on the social media site.

On a video posted to her personal YouTube account, Ashley answered back to all the hatred with a video talking about her struggles with being the face of this awful meme,

I have never been one to be uncomfortable with going out in public and my natural hair until this picture was posted.

After reading a few particularly hateful comments, Ashley admitted she lost confidence for a while. She said she didn't go out unless she had full makeup on and her hair done.

Ashley eventually rose about all the hate and started living life on her own terms again.

Citations: After Discovering She Had Been Turned Into A Cruel Meme This Woman Decided To Speak Out (BuzzFeed)