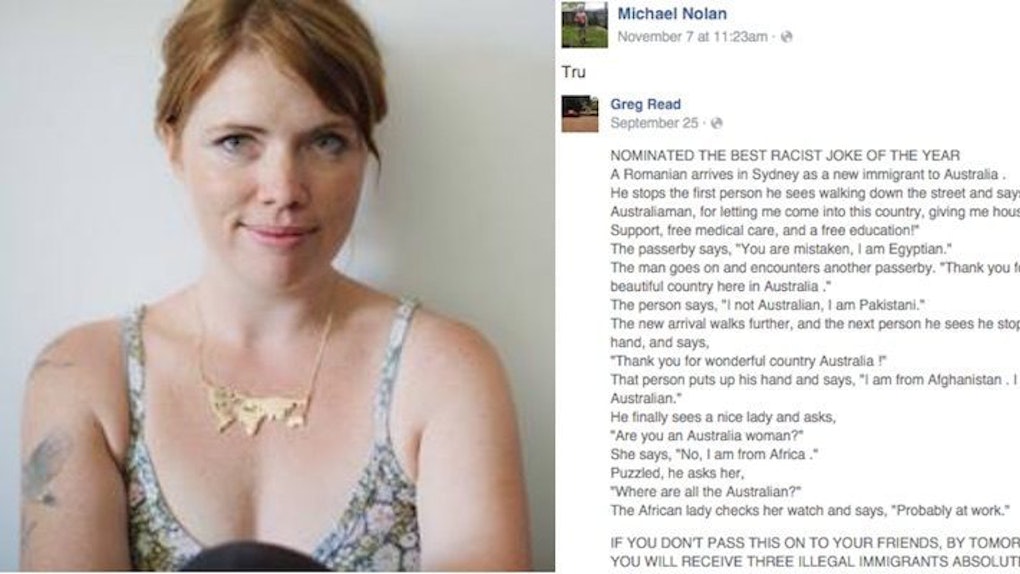 Cyberbullies start fights on the Web they wouldn't dare undertake in real life, confident they are operating in an online bubble protecting them from any true consequences.

In a post on her own page on November 26, Ford included that screenshot, along with screenshots of a few racist posts from Nolan's Facebook, and asked his employer, Meriton Apartments, whether or not it was aware of its employee's views and behavior.

I wonder if the folks over at Meriton Apartments are aware that a man listing himself as a supervisor for their business... Posted by Clementine Ford on Thursday, November 26, 2015

A few days later, Ford shared a follow-up post featuring a message from the Meriton Group assuring her the company “does not condone this type of behaviour.” As a result, Nolan “no longer works for the Meriton Group,” the post said.

Update on Michael Nolan:I've just received this message from the Meriton Serviced Apartments Group, and I wanted to... Posted by Clementine Ford on Sunday, November 29, 2015

When commentators began to accuse Ford of ruining Nolan's life and costing a man his job, she insisted,

He is responsible for his actions. He is responsible for the things he writes and the attitudes he holds. It is not my responsibility to hold his hand and coddle him when he behaves in an abusive manner just because it might have consequences for him… The targets of your abuse are in no way, shape or form responsible for making sure your actions have no recriminations for you.

In an article for Daily Life, Ford suggested her options were limited when dealing with online harassment.

Facebook's methods for responding to abuse are useless… The only recourse possibly left to the women ritually targeted by gendered harassment is to try and create consequences for people in their everyday lives.

Ford asserted the “alternative is for women to remove themselves from the online world… and be silent,” an unsavory option for the women's rights supporter.

Feminists whose blood is boiling over Ford's backlash, as well as haters looking for unadulterated rage statements akin to their own, can learn more by reading a post on Ford's blog featuring pictures of comments and messages she received in the wake of her actions.